George Lucas is one of the most influential film makers in Hollywood history.  He is also the guiding force behind Star Wars and its sequels.  The Star Wars movies tell the story of the rebels Luke Skywalker, Princess Leia, and Han Solo as they battle the evil imperial forces of Darth Vader.  These films became some the most popular motion pictures in history.

Lucas was born in Modesto, California, and educated at Modesto Junior College and the University of Southern 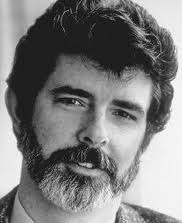 California, graduating from the university in 1966.  His first love was auto-racing, but a near fatal accident forced him out of the sport and into film making.  His career began with his prize-winning student film THX-1138, a science fiction story that he reworked as his feature-directing debut in 1971. The film was produced by American Zoetrope.  In 1971, Lucas formed his own film company, Lucasfilm Ltd., in San Rafael, California.  With the backing of American film producer Francis Ford Coppola, Lucas then made American Graffiti which returned $50 for every dollar spent on production and distribution, a staggering ration in the movie business.  The film is considered one of the biggest successes of low-budget film making.  It made George Lucas a millionaire before the age of thirty.  It also launched the film careers of Richard Dreyfuss, Ron Howard, and Harrison Ford.  The film won the Golden globe, the New York Film Critics’ and National Society of Film Critics’ awards, and also won five Academy Award nominations and over grossed $145 million dollars.  Lucas was now a major Hollywood director, and was given support for his next project because of it.

Lucas’s next film, Star Wars, revolutionized the commercial film industry.  Lucas wrote and directed the science-fiction adventure that almost every studio in Hollywood had turned down, Star Wars took popular culture by storm and redefined the nature of the movies.  The film was a gigantic, unprecedented undertaking, and though he tried to maintain fath that it would be at least a modest success, he went through times of terrible doubt.  Shooting took months of eighteen-hour days, with Lucas overseeing the tiniest details until, at one point, he was hospitalized for hypertension.  Lucas thought that the film would bomb at the box office, but a friend called him and told him what a success it was.  People got out of the movie, and then got in line again.  Star Wars grossed over $400 million dollars on it’s initial run alone.  It also created a giant merchandise business.  The stress of directing Star Wars led Lucas to hire Irvin Kershner to direct the sequel, The Empire Strikes Back.  After Star Wars, Lucas retired from directing and instead focused on producing films and overseeing Industrial Light & Magic, a company he founded in 1975 to create special audio and visual effects for movies and television.  He served as Exec. Producer for the Star Wars sequels The Empire Strikes Back and Return of the Jedi.

In 1980, he was the executive producer of Raiders of the Lost Ark, directed by Steven Spielberg, which won five Academy Awards.  He was also the co-executive producer and creator of the story for Indiana Jones and the Temple of Doom.  The film, released in 1984, earned two Academy Award nominations and won an Oscar for its visual effects.

Lucas’ next project was the adventure-fantasy film Willow. Based on an original story by Lucas, the film was directed by Ron Howard and executive-produced by Lucas.  Willow was released in 1988 and received three Academy Award nominations.

Also in 1988, Lucas executive-produced Tucker: The Man and His Dream.  The film, directed b Francis Coppola, got three Academy Award nominations.  In the following year, Lucas served as executive-producer for Indiana Jones and the Last Crusade.  The film was nominated for two Academy Awards, earned an Oscar for Best Sound Design, and became the number one worldwide box office hit for 1989.

Lucas also created and produced films and series for television, including The Young Indiana Jones Chronicles series.  In 1995, his novel Shadow Moon was published, intended as the first installment in a trilogy called Chronicles of the Shadow War.  In 1996, he formed Lucas Learning Ltd., a multimedia publishing company focusing on releasing education CD-ROM’s.

In 1997, Star Wars, The Empire Strikes Back, and Return of the Jedi were rereleased.  The new versions featured new, digitally enhanced special effects and new scenes that had proved too difficult to include in the original releases.  In 1999, Lucas released Star Wars: Episode I – The Phantom Menace, the prequel to the Star Wars movies.  The Phantom Menace tells the story of Anakin Skywalker, Luke Skywalker’s father.

Lucasfilm, has today evolved into five Lucas companies.  The Lucas group of companies include Lucasfilm Ltd., LucasArts Entertainment Company LLC, Lucas Digital Ltd. LLC, Lucas Licensing Ltd. and Lucas Learning Ltd.  Lucasfilm includes all of Lucas’ feature film and televison productions as well as the business activities of the THX group which is dedicated to ensuring excellent film presentation quality in theaters and homes through a series of specialized services.

Lucas is living proof that a film maker can grab a large audience with life-affirming material.  In 1992, the Academy of Motion Picture Arts and Sciences gave Lucas the Irving G. Thalberg Award for maintaining an exceptionally high standard of film making.  “I’ve always tried to be aware of what I say in my films,” he said in his acceptance speech, “because all of us who make motion pictures are teachers; teachers with very loud voices.”