The term ‘genius’ was applied to him from the cradle, first by the man who would vie with Orson’s father to nurture the talent all agreed resided in the fragile boy.(Leaming, 3)

George Orson Welles was born in Kenosha, Wisconsin on May 6, 1915. He was the second son of Richard Head Welles, an inventor, and his 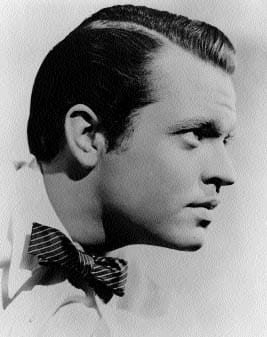 wife Beatrice Ives, a concert pianist.  His mother was the child of a wealthy family.  She had been brought up to revere artistic achievements, and began playing the piano, professionally, only after her marriage broke up when Orson was six.  A local doctor, Russian-Jewish orthopedist named Maurice Bernstein, who was a passionate admirer of Mrs. Welles, on first sight of the infant Orson declared him to be without a doubt a genius.  Bernstein showered Orson with gifts and virtually took over the direction of his life, to such an extent that Orson called him ‘Dadda’.

When Orson was four, his father moved his family to Chicago, possibly to get away from Bernstein’s attentions.  This plan failed when Bernstein almost immediately followed them.  Through Bernstein who was always forcing him to perform, and through his mother musical talents, the young Orson quickly came into contact with Chicago’s musical society and walked on in the Chicago Opera’s production of ‘Samson and Delilah’, then in a more important role of Butterfly’s love-child Trouble in ‘Madame Butterfly’.  He also got a temporary job dressed up as a rabbit at Marshall Fields.

Shortly after Orson’s sixth birthday his parent’s formally separated, his father taking off and his mother remaing to pursue her music ambitions in Chicago.  Welles live most of his time with his mother and Dadda Bernstein, but regularly traveled with his father on holidays.

His health effectively kept him out of school until he was eleven, so he had acquired a lot of cultural groundings at home with his mother and the doctor.  Fears that he might prove ungovernable like his brother Richard, who had been expelled from school by the age of ten and subsequently banished from home, brought him in 1926 to enrollment in the Todd School for Boys at Woodstock, Illinois, a few months after his mothers death from a liver condition at the age of forty-three.  The school was ideally equipped for the nurturing of a young wayward genius.(Taylor)  It was run by the proprietor, a terror rejoicing in the name as ‘the King’.

Todd School had something of a tradition in drama, though mainly lightweight revues, nativity plays and such.  In this department Orson soon got his own way.  He was before long adapting, directing and starring in:  ‘Doctor Faustus’, ‘Everyman’, ‘Le Medicin Malgre Lui’, ‘Julius Caesar’ with Orson as Cassius, ‘Dr. Jekkyl and Mr. Hyde’, with Orson as both.  He also built and managed a large puppet theater, writing his own melodramatic scripts and directing his assistants with the utmost authority.

As he moved into his teens Orson was already well on his way to becoming a legend. Everybody seemed to be convinced that he was extraordinary, and quite possibly a genius in the making.  But for all his outward reassurance, the child lived in a constant fear of not living up to his parent’s expectations.  “I always felt I was letting them down.  That’s why I worked so hard.  That’s the stuff that turned the motor.”(Leaming, 6)  He would do anything for their approval.  He remembers that when he was very young his parents sent him on errands to the other side of town.  Terrified to go off alone, but wanting to please them, the child repeatedly forced himself to do as they asked without flinching.  ” I was taught to feel secure, it was not in my character.”

It is important in looking at Welles’s arrival in Hollywood and his extraordinary contract his agent Arnold Weissburger managed to get out of RKO to be quite clear what the ‘it’ was.  What Welles had done was to hit the headlines with amazing consistency.  From the black Macbeth onwards, Welles had shown an uncanny knack, not only of delivering enough quality to keep the intellectual audiences returning, but also of doing it in the most public and newsworthy way, so that he was a name and had achieved a notoriety even with millions who had never had the chance to sample his work.  The talent was worth gambling on, even in Hollywood.(Taylor, 41)

And that sort of gamble is just what Schaefer and RKO decided to take.  The very nature of Welles’s contract, which tied him to make two films, the first by 1940, the second by 1941.  Getting paid $100,000 for the first, and $125,000 for the second, plus percentages of the profits after RKO had made back that initial investment of $500,000 per picture.  Orson would produce, write, direct, and appear in both of these pictures which was news in itself, and supported his public image of the wonder boy.  In early February of 1939 Orson began to work on the idea which was to become a milestone in motion picture history, ‘Citizen Kane’.  To help him he hired Herman J. Mankiewicz, successful screenwriter, and more immediately a regular writer for the Welles radio shows and collaborator on “The Smiler with a Knife” script.

Apart from anything else, there are very clear autobiographical connotations in Welles’s picture of Charles Foster Kane.  The most obvious is the naming of young Kane’s kindly, protective guardian as Bernstein, like Welles’s own. Citizen Kane was them, and is now, essentially a film-makers film. there was possibly nothing in the film that was absolutely unprecedented.(Taylor,57