Pierre Auguste Renoir, a French impressionist painter, was noted for his radiant, intimate paintings, particularly of the female nude. Recognized by critics as one of the greatest and most independent painters of his period, Renoir is noted for the harmony of his lines, the brilliance of his colour, and the intimate charm of his wide variety of subjects. Unlike other impressionists he was as much interested in painting the single human figure or family group portraits as he was in landscapes; unlike them, too, he did not subordinate composition and plasticity of form to attempts at rendering the effect of light.

At the age of 13 Renoir began painting flowers on dishware at a porcelain factory and later painted fans and screens. In 1862 he entered the 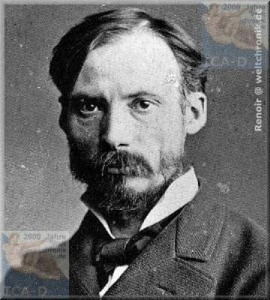 studio of Charles Gleyre (1808-74) and became friends with Claude Monet and Alfred Sisley, who shared his inclination to take up painting outdoors. By the time (1869) that he and Monet worked together at La Grenouillere, on the Seine, Renoir had developed a delicate touch and vibrant brushwork that were distinctly his own.

In the early 1870s, Renoir and his friends joined with other avant-garde artists to form a loose-knit artistic circle now known as the impressionist movement. He participated in the first impressionist exhibition (1874) and throughout the 1870s remained committed to impressionist ideals. Renoir, however, continued to produce paintings of a more traditional sort, including portraits and scenes of leisure enjoyment, such as Le Moulin de la Galette (1876; Musee d’Orsay, Paris). In his portraits and society paintings, Renoir masterfully rendered the shimmering interplay of light and colour on surfaces, the prime goal of impressionism, but also kept an underlying sensuality. Outstanding examples of his talents as a portraitist are Madame Charpentier and Her Children (1878, The Metropolitan Museum of Art, New York City) and Jeanne Samary (1879, Louvre).

Renoir’s growing dissatisfaction with the formal restrictions of pure impressionism intensified during a visit (1881-82) to Algiers and Italy. In response, he made his figures larger and placed them closer to the picture-plane, with a setting treated like a simple backdrop. This frieze like treatment, best exemplified in his Dance at Bougival (1883; Museum of Fine Arts, Boston), led to his so-called “harsh manner” of the mid-1880s, in which he purified his contours and used frozen, static poses.

In 1887 Renoir completed a series of studies of a group of nude female figures known as the Bathers (Philadelphia Museum of Art). These reveal his extraordinary ability to depict the lustrous, pearly colour and texture of skin and to impart lyrical feeling and plasticity to a subject; they are unsurpassed in the history of modern painting in their representation of feminine grace. Many of his later paintings also treat the same theme in an increasingly bold rhythmic style. During the last 20 years of his life Renoir was crippled by arthritis; unable to move his hands freely, he continued to paint, however, by using a brush strapped to his arm. Renoir died at Cagnes-sur-Mer, a village in the south of France, on December 3, 1919. 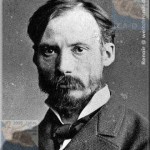 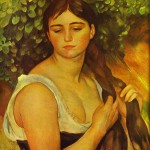 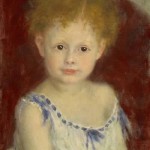 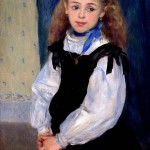 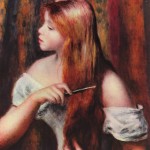 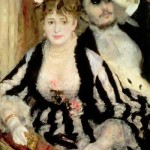 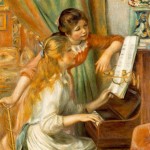 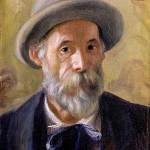 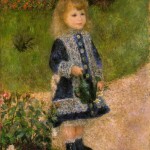 Other notable paintings by Renoir include La Loge (1874, Courtauld Institute Galleries, London); Woman with Fan (1875) and The Swing (1875), both in the Louvre, Paris; The Luncheon of the Boating Party (1881, Phillips Collection, Washington, D.C.); and Vase of Chrysanthemums (1895, Musée de Beaux-Arts, Rouen)–one of the many still life’s of flowers and fruit he painted throughout his life.