Berthe Morisot, a French painter was born in 1841 into a wealthy family. Morisot started to receive painting lessons from Joseph-Benoit Guichard, and soon became interested in Impressionism. Morisot had married Eugene Manet and was declared sister in law of Edouard Manet.

Though she was inspired by him and he was her mentor, she clearly showed her own distinct style in every painting. “If we had to define Berthe Morisot’s originality, the quality that really distinguishes her from the contemporaries- we might describe her as a painter of the early morning light. Better than any other painter, she captured, but that is almost too strong- conveyed on the canvases the pale gold of dawn “(Rey 85). Although she wasn’t a very popular featured impressionist, she still held a place among the greats such as Manet, Monet and Renoir. Manet had a profound impact on Morisot and her style of painting. “Morisot learned a great deal about her painting from Manet, whose art she esteemed perhaps more than that of any other contemporary” (Farwell 46). Many say she followed his style to some degree and respected his ideas. He would often assist her in some pieces as so did she. One can say it was a mutually beneficial relationship.

“Naturally the aspiring artist was attracted by the personality of the famous older man and admired his work. Manet, in turn, was dazzled by the young woman, for he was able to see not only her own promise but how much she could inspire in others” (Rye 15) . She was a French female artist of the 1860’s who yearned to pursue a career in art, in which she had done successfully. One must fully understand that this was an age where female painters were not in abundance and there were many barriers. In 1860 she joined the impressionist group, which at the time consisted of Manet, Monet, Renoir, Pissaro, Van Gogh, and Degas. “Morisot became involved in the impressionist movement through personal connections” (Higonnet 23). Impressionism mainly focuses on capturing a moment and what the eye sees. The impressionists wishes to portray an image, letting the paint convey an image or an impression. The main characteristic is that they used broken brush strokes , or marks which were swatches of paint. These are applied in a way that the eye forms an image. Morisot became interested in observing the effects of light and atmosphere. She liked working outdoors, which one may assume helped her to be able to capture the immediacy of the moment. She mainly focused upon female subjects, usually mother and child. 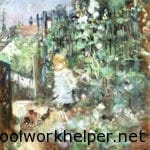 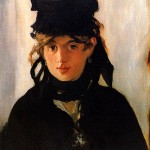 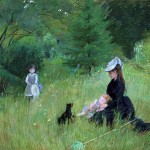 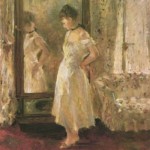 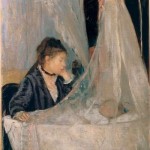 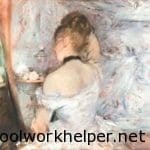 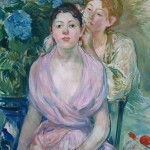 “The portrayal of family life within the domestic setting, formed, understandably, the most important element in the iconography of all the women impressionists. Morisot’s paintings celebrates bourgeois womanhood in all its stages: from pregnancy, through the first months of motherhood through the years of caring. The world of women’s labor very often forms the subject of her paintings” (Adler & Garb 85). However this was not all she focused on. She painted nature scenes, landscapes, and aspects that were usually around her, such as family paintings, especially her sister Edma who is greatly featured in her art. She also painted familiar aspects that indicated her social position, and events that were considered normal for her, like balls and social events.  She rarely painted male figures other than her husband. “Morisot also symmetrically excludes men from her paintings. Not for want of knowledge, obviously, since she was married, and had several close male friends. Yet her husband, Eugene Manet, figures independently in only five of her pictures and is the father of their child in only a few more” (Higgonet 74). In some of her art clear details are seen, and in other paintings there are vague images with light brush strokes.

One can only wonder if this was a technique she had demonstrated , but there is no mention of this. It could not have been a progression of her skills because the difference in her style varied throughout her career. “Toward the end of her career she made a few attempts at more professionally ambitious themes, like nudes” (Higgonet 102). Many people have found that she had remarkable talent yet she failed to continue professionally. If she had gone forth with her career she would have been given more recognition than Mary Cassat. Her work focused upon creating femininity, and her art as a whole consumed the idea. She was a determined woman who was very serious about her art, and it was portrayed in the way she painted.