In 1883, the romantic artist, Martin Johnson Heade visited Florida. Impressed with St. Augustine, Heade settled there and worked in a studio in the Ponce De Leon Hotel made available to the artist by Henry Flagler, railroad magnate and developer of Florida’s east coast. The combination of St. Augustine’s Old World atmosphere, tropical vegetation, and serene marshes created the ideal working environment for Heade. Heade’s contribution to American nineteenth-century painting is embodied by his study of light, particularly as reflected in painting of sun-dappled fields and marshes (Casson 213). He is admired for his originality and for the subtle atmosphere effects, glorious light and sumptuous warmth of his canvases. The St. Johns River marked with a colorful sky, steady movement, and a quiet mood, is a good example of Heade’s mature painting style.

The first visual technique that the artist used in this painting was Heade’s brilliant use of light. The dark greens of the trees and the blackness of the bushes contrast strongly against the atmospheric scattering of sparkling light rays dissolve into cool shades of the evening. The bright tint of the sparkling sun seems to fade slowly as late afternoon wends its way to dusk and dusk to nightfall.

“Light is fascinating stuff. It radiates. It illuminates. It dazzles. It glows. It beckons like a beacon. We speak of the ‘light or reason.’ We speak of 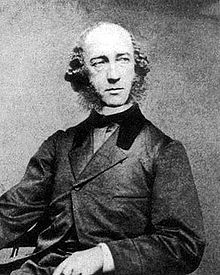 genius as ‘brilliance.’ Visible light undulates wavelike throughout the universe. It bounces off objects and excites cells in our eyes, enabling us to see. Light is at the very core of the visual arts. Without light, there is no art.”
(Osbourne 50)

With Heade’s magnificent use of light, he is able to express the true beauty and mysterious innocence of nature. The yellow and orange colors in this painting represent the warmth of the departing sun and the violets and blues represent the coolness of the arriving evening. Martin Johnson Heade’s fascination with mastering the use of light is said to have been greatly influenced by the intensely colored, highly realistic canvases of Frederic E. Church. Heade’s love of landscapes was accumulated while studying the seascape works of John F. Kensilt (Bevetzin 585).

When looking at this oil on canvas masterpiece, many emotions boiled in my body and it transformed my whole attitude about the world of art. The still waters of the marsh portray memories of summer days and summer nights when I would go fishing on the river as a child. The dinginess of the mosses that droop from branches represents the age and tranquility of an age old surrounding that is still apparent in this modern world of industry and technology. The reflective surface of the water and the subtle breezes that flow throughout the swamp grasses and tree-tops represent the peace and balance of nature that can turn into chaos with the slightest movement. The sun setting in the distant sky tells of a busy and bountiful day, in an otherwise restless area of the ever changing ecology of the swamp lands. The hazy atmosphere produced hopelessly romantic visions of lying on the sandy banks of the St. Johns River talking with a loved one.

The artist uses the principals of movement to create the illusion of a steady air current that flows through the marshland greenery, the changing of the hours, and animal life in the wild. In Bronowski’s book The Visible Eye, he states that “Organic shapes, diagonal lines, and curved lines are often used to imply a sense of physical action and directionality” (Bronowski 135). Using curved lines, Heade manipulates the eye into believing that there are slight winds blowing through the tall trees and the firmly planted shrubbery on the river banks. Long, slender clouds stretch their way across the brightly lit sky and seem to gradually vanish with the setting sun as the violet sky seeps its way into view. Heade also uses organic shapes and shadows to represent a powerful sense of movement. By the use of these lines, several birds near the bottom right portion of this painting give the impression that they are in flight. Dark shadows below the birds implies even more so that they are soaring above the water top, perhaps beginning the journey back to their dry, elevated homes and families that patiently await their arrival. 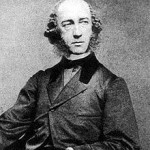 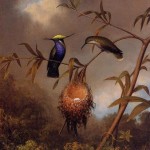 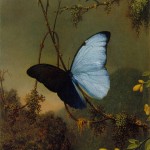 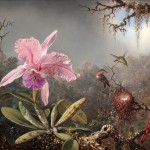 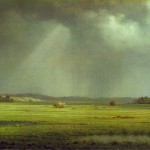 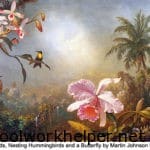 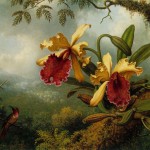 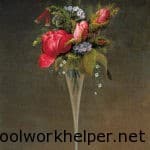 In conclusion, Martin Johnson Heade was an intensely romantic nineteenth-century American artist. Through his paintings, he is able to capture the beauty and respect that nature so rightly deserves. While he spent his time in Old St. Augustine, Florida, Heade composed a plethora of still-life and landscape works of art, but above all the fascinating work he produced, the St. Johns River had the greatest effect on me. The mellow environment the beautifully multi-colored sky and the subtle movements of the swamp lands mesmerized my eyes and relaxed my entire being. The subtle movements of the swamp lands and the tranquility of the environment soothed my soul and refreshed my visual sensations. Martin Johnson Heade is one of the most original, creative, and passionate painters of the nineteenth-century, and will forever be respected for his work.