Elia Kazan, his Turkish name “Kazanjoglous,” was born in Constantinople (now Istanbul), Turkey to Greek parents. At the age of four he moved with his family to the United States and settled in New York City. Elia Kazan attended formal education at Williams College in Massachusetts; he later studied at prestigious Yale University’s Drama school. Kazan was known of “Gadget” later on his life due to the fact, as he says it, “I am short, compact and eccentric–like a gadget.” Kazan acted in a few films; however, his real talent was shown in his ability to direct.

He began his career as an actor and stage manager for New York’s Group Theatre Company (a strong leftist organization), which was just 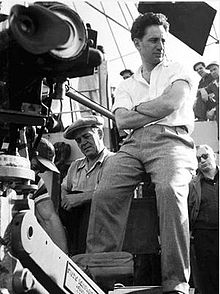 recently established. His involvement in the group led him to join the “American Communist Party” in 1934. He was only involved with the Communist Party for a short time; however, he was quickly recognized as a potential communist by the “House of Un-American Activities Committee,” a group that was investigating the motion picture industry because of growing concern of communists working in the industry. A blacklist of names was being circulated, and those on the list could be in serious trouble and be denied to work in the film industry again. The committee called people to “rat out” others, many refused, however; Elia Kazan gave the committee the names of eight communists of the same party he was, and his reasoning was he did not want to be on the blacklist. Any member found to be on the blacklist had their credits removed from any film they had participated in. Names he gave out also included “friends” who had worked with him in The Group Theater. Recently, debates were circulating over the “Lifetime Achievement Academy award” to which Kazan was to be awarded. However, many thought he did not deserve to be recognized with this honor because of his help to the “House of Un-American Activities Committee.”

Kazan’s first major recognition came with his director’s abilities in Thorton Wilder’s “The Skin of Our Teeth” which received a Pulitzer Prize. He went on to direct “One Touch of Venus” (1943) and “Jacobowsky and the Colonel” (1944) which was a Drama Critics Circle Award winner. Elia Kazan went on to win many awards including a “Tony Award,” “a New York Drama Critics Award,” and a “Donaldson Award.” The Donaldson Award was given for his work in collaborating with Tennessee Williams in the famous “A Streetcar Named Desire” which was a Pulitzer Price winner. Following that year, in 1947, Elia Kazan along with Lee Strasberg and other alumni from his days at Group Theater founded “Actor Studio,” which became a spiritual home for people interested in theater. Here Elia Kazan taught many famous actors, including Paul Newman, Marlon Brando and James Dean, in his style of “method” acting.

Even after helping to found Actor Studio he continued his work on Broadway with more Pulitzer Price winning work such as Arthur Miller’s “Death of a Salesman” which won him another Tony, a New York Drama Critics Award and a Donaldson. His most famous work, and widely acclaimed work, is considered to be “On The Waterfront” (1954), which won a number of Oscars, including best picture and best director. Some of his other famous works include “East of Eden” (1955), which won the Cannes Film Festival award, “Baby Doll” (1956), which was written by both Elia Kazan and Tennessee Williams.
Not only did Kazan direct and act in films he also dabbled a bit in novels. He wrote “America, America” and “The Arrangement,” which both were turned into motion picture films. He has also written “The Assassins,” “The Understudy” and “The Anatolian.”

Kazan was one of America’s greatest directors on stage and on film and without his contributions to the film industry and on stage the way things are done now would not be happening if was never involved. Sadly, Kazan recently died in his home in New York City on September 28, 2003 of Natural causes. His work in theater will; however, never be forgotten for decades to come.