Alfred Hitchcock is one of the most well known directors of all time, as he helped perfect the murder and mystery genre.  His started 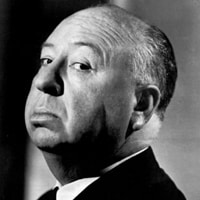 his directing career in1925 with “The Pleasure Garden” and ended in 1976 with the film “Family Plot”, and set a standard for all other directors in the film industry. Many techniques used by Hitchcock, along with some of the storylines have become common standards for the films of today.  Most Americans know Hitchcock from several of his famous movies such as “Psycho” and “Vertigo”, but it was in England years before that he developed into an amazing director and created films which set the tone for his later works.  It is very interesting to analyze some of his earlier works to see how he became such a prominent figure in modern History.

Hitchcock was raised in England where he lived with his parents.  He had a strong interest in filmmaking since he was young, and when a new Paramount studio opened where he lived, he rushed to get a job there.  They hired Hitchcock as a “Title designer” for silent films.  Basically, he would write out the words which are displayed after each shot in a particular film which helped move the story along during the silent film era. From there, he worked his way up to become an assistant director, and directed a small film which he was never finished, and was never released (Philips 22).  Hitchcock’s first real debut as a director took place in 1925 when he released the film “The Pleasure Garden” (Giannetti 182).  Just a year later he released a film that really helped his career take off titled “The Lodger”.  “The Lodger” is a model example of a typical Hitchcock plot.  The basic idea behind the plot is that an innocent man has been accused of a crime that he didn’t commit, and through mystery, danger, and love he must find the real criminal (Philips 23).

It wasn’t long before Hitchcock became known as the “Master of Suspense”, which is a title he actually gave to himself.  The first talkie created by Hitchcock was the movie “Blackmail”. The film, which was released in 1929, had originally supposed to be a silent film, and there are some people who think it should have stayed that way. nevertheless, it was a incredible breakthrough for both Hitchcock and the British film industry as it was their first film with sound (Giannetti 182).  However, there were a few problems that arose with the transition to sound.  A girl named Anna Ondra played the female character Alice, and had a thick Eastern accent which came to be impossible to interpret in the film.  This was obviously never a problem for her prior to “Blackmail” since she had only starred in silent films.  Hitchcock helped to fix this problem by getting someone to dub over her voice which turned out to be the perfect solution (Philips 23).  This film features a classic Hitchcock story where the character wants the police to understand what happened, but decide it isn’t a good idea.  They figure that the police would never believe them anyway, so they’re on their own (Philips 23).

Hitchcock loves to return to the same themes time and time again, but he somehow manages to never make the same movie twice.  Each movie has a certain characteristic that sets it apart from all the rest.  In “Blackmail” for example, the visuals and sounds set themselves apart, but do not detract from one another. Hitchcock managed to keep a strong emphasis on the visuals when incorporating sound into his films. The sound does not overwhelm in “Blackmail”, so the viewer is still able to pay attention to the fine details.  For example, the image of hands continually reaching for Alice is as evident as it should be.  This also applies to the glove which is forgotten in the studio, the setting of the murder (Thomson 28).  The sound only works to improve on what is already there.

The film that really set off Hitchcock’s career is the 1935 film “The 39 Steps”, which was based off a book written by John Buchan.  “The 39 Steps” is a murder mystery with a little bit of espionage.  The story is about a man named Richard who is new to London.  After a fight breaks out at a nearby theater, Richard is approached by a girl in distress who pleads to go home with him. He agrees, and soon finds out that she is hiding from several men that are chasing her.  From then on he is involved in chases, confrontations, and romance (Philips 24). There were several changes in the story line that Hitchcock knew would work better on screen.  The Professor in the novel is unique because of his hooded eyes, not a missing finger as shown in the film.  Hitchcock thought a missing finger would be more dramatic to the film than someone with half shut eyes because it is much more noticeable, and has a stronger effect (Rose 10).

This film is one of the most popular early works of Hitchcock, because it derives Hitchcock’s distinct and unique style of directing. A lot of the ideas from this film are reworked in later films such as “Saboteur”, and “North by Northwest” (Giannetti 183). This film also displayed his talent as being able to make a novel’s story line work in a movie with just a few adjustments. The length of Hitchcock’s movies are important to him, he was once quoted as saying: “The length of the film should be directly related to the endurance of the human bladder”, a standard all directors should work by in my opinion” (Anderson 56).  He was able to compress the novel to a length that would not only interest the audience but improve upon it as well.

Hitchcock also uses the technique of irony quite often which many viewers may not realize, but it is part of what makes him so great.  As mentioned in “The 39 Steps”, Richard allows the women to go home with him, at which point she tries to explain to him what happened at the theatre.  Richard tells her that she shouldn’t bother telling him because he’s a nobody.  The real irony in this statement is that throughout the movie Richard goes on to pose as a milkman, a mechanic, a parade marcher, and a political speaker.  This strongly contradicts his statement because he is virtually everyone (Thomson 29).

“The 39 Steps” definitely had a large historical impact on movies.  After this movie came out almost every chase and spy thriller have copied its approach.  Directors discovered that movie-goers really enjoyed this type of film.  The movie gets the viewer so involved in the suspense, action, and romance they almost forget about the actual 39 Steps.  Even more amazing, the film contains minimal special effects, but it doesn’t need them since the suspensful plot and the staging of the shots make the audience stay in their seats to find out what happens (Rose 101).

Hitchcock came to America in 1939 as an already very established filmmaker.  “Rebecca”, released in 1940, was Hitchcock’s first 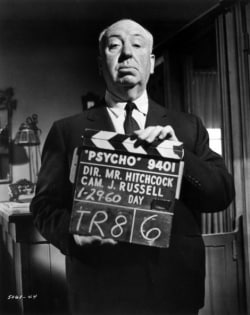 American film and was a huge success, winning best picture.  During this decade Hitchcock also created two other Masterpieces:  “Shadow of a Doubt in 1943, and “Notorious” in 1946.  It wasn’t until the 1950s however, that Hitchcock really took off in the US and became a household name.  This era produced some of his best work such “Strangers on a Train” in 1951, “To Catch a Thief” in 1955, and “Vertigo” in 1958.  1960 is arguably the pinnacle of Hitchcock’s career when he released the hit “Psycho”, which generated over 18 times more money than was put into it.  His final work came in 1976 when he released “Family Plot”, putting an end to one of the most amazing directing careers in the history of film (Giannetti 279-81).

There is no denying that Hitchcock enjoyed the majority of his success here in America, but he wouldn’t have become the great director he was without his experience over in England.  It was there that he developed into an amazing director, and began to show the world some of the things he was capable of.  The consistency of quality plot lines and technical creativity earned him the recognition of being one of the greatest filmmakers of all-time.

Phillips, Louis. “The Hitchcock Universe:  Thirty Nine Steps and then some”.