Charles Babbage may have spent his life in vain, trying to make a machine considered by most of his friends to be ridiculous.  150 years ago, Babbage drew hundreds of drawings projecting the fundamentals on which today’s computers are founded.  But the technology was not there to meet his dreams. He was born on December 26, 1791, in Totnes, Devonshire, England.  As a child he was always interested about the mechanics of everything and in the supernatural. He reportedly once tried to prove the existence of the devil by making a circle in his own blood on the floor and reciting the Lord’s Prayer backward.  In college, he formed a ghost club dedicated to verifying the existence of the supernatural. When in Trinity College in Cambridge, Charles carried out childish pranks and rebelled because of the boredom he felt from knowing more than his instructors.  Despite this, however, he was on his way to understanding the advanced theories of mathematics and even formed an Analytical Society to present and discuss original papers on mathematics and to interest people in translating the works of several foreign mathematicians into English. His studies also led him to a critical study of logarithmic tables and was constantly reporting errors in them. During this analysis, it occurred to him that all these tables could be calculated by machinery. He was convinced that it was possible to construct a machine that would be able to compute by successive differences and to even print out the results. (He conceived of this 50 years before type-setting machines or typewriters were invented.) 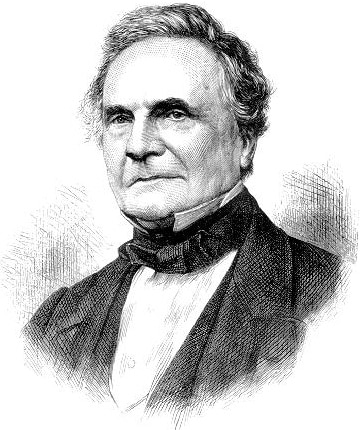 Georgina would have eight children in thirteen years, of which only three sons would survive to maturity. Babbage really took no interest in raising his children. After Georgina died at the age of 35, his mother took over the upbringing.  In 1816, Babbage had his first taste of failure when his application for the professorship of mathematics at East India College in Haileybury was rejected due to political reasons, as was his application, three years later, for the chair of mathematics at the University of Edinburgh. Fortunately, his elder brother supported his family while Babbage continued his work on calculating machines.

At the age of 30, Babbage was ready to announce to the Royal Astronomical Society that he had embarked on the construction of a table-calculating machine. His paper, “Observations on the Application of Machinery to the Computation of Mathematical Tables” was widely acclaimed and consequently, Babbage was presented with the first gold medal awarded by the Astronomical Society. Babbage was also determined to impress the prestigious Royal Society and wrote a letter to its president, Sir Humphrey Davy, proposing and explaining his ideas behind constructing a calculating machine, or the Difference Engine, as he would call it. A 12-man committee considered Babbage’s appeal for funds for his project and in May 1823, the Society agreed that the cause was worthy.

While constructing this machine, implementation problems arose as well as a misunderstanding with the British Government, both of whom regarded this machine as property of the other. This misunderstanding would cause problems for the next twenty years, and would result in delaying Babbage’s work. Babbage also apparently miscalculated his task. The Engine would need about 50 times the amount of money he was given. In 1827, Babbage was overwhelmed by a number of personal tragedies: the deaths of his father, wife and two of his children. Consequently, Babbage took ill and his family advised him to travel abroad for a few months. Upon his return, he approached the Duke of Wellington, then prime minister, regarding the possibility of a further grant. In the duke, Babbage found a friend who could really understand the principles and capabilities of the Engine and the two would remain friends for the rest of the duke’s life. Babbage was also granted more money.  He continued work on the project for many years.

In old age, Babbage agreed, at the age of 71, to have the completed section of his Difference Engine shown to the public for the first time. Babbage’s many disappointments led him to say that he never lived a happy day in his life. Babbage died in 1871, two months shy of his 80th birthday.