Confucius– Confucious was a Chinese philosopher who has had a major impact on East Asia because of his teachings. He was born in 551 BCE and he died in 479 BCE. Confucius is important because he felt the world had gone 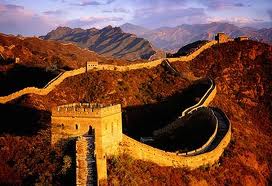 wrong. He felt that it was up to him to try and save the world and restore its order. He began to try and teach people using his philosophies and had a major emphasis on the government and judicial systems. There are also a couple of interesting things that Confucius has done. Firstly, he was the basis for a philosophical system in the western world called Confucianism. Confucius was once Justice Minister of the state of Lu in China. Confucius is also considered the father of conservatism.

Great Wall of China– The Great Wall of China was a wall built to protect the Chinese from their invaders, especially at the time the Mongolians. There have been 5 walls built by the Chinese but the one that we see today is the one built by the Ming Dynasty, in 1368 CE. The Great Wall is important because firstly it showed the military strength of the Chinese which made it able to scare off invaders. It was also a symbol of human strength to be able to build such a magnificent icon. Here are a couple of interesting facts about the wall. The Great Wall can be seen from outer space. It in the end did not wind up aiding the Ming Dynasty in the war that led to their fall. Only 20% of the wall is in condition.

Marco Polo– Marco Polo was an Italian explorer who was the first European to go to China. He was born September 15, 1254 in Venice, Italy. He died January 8, 1324 in Venice, Italy. Marco Polo is most famous because of the fact that he discovered China. While he was there he realized how very advanced there civilization was. He discovered that they had printing press, ice cream, silks, spices and gold. They also used white horses to do a lot of the work for them. There are also some interesting facts about Marco Polo. He is the subject of a game played in swimming pools called Marco Polo. His father was a trader and that was what wound up bringing him to China. Marco Polo was a national hero because of his journey.