In the summer of 1966 there was a new effort on the part of the head leaders in China to further control the actions and thoughts of the people in China. The Red Guards were the force to do it all. A group of kids who mostly in their teens and some in college were put into this gang. This so-called military force was called the Red Guards. Groups of these Red Guards traveled from the large cities all the way to empty country sides. They held huge demonstrations at every stop. Their main goal was to eliminate as many as possible of the customs and traditional thoughts of the old China. They participated in Long Marches and other activities. The man they looked up to most was a person by the name of Mao. They carried huge portraits of him and also carried banners and flags. Many people in the group beat on gongs and drums. Some observers said it looked more like a circus then a political demonstration. They did a lot of things that many thought were outrageous. At one point they raced widely through Peking denouncing anyone who was in a business. They even made a demand to change the meaning of the colors in a stop light. According to the Red Guards, that because the color of communism is red, that you should go on red and stop on green.

When the Red Guards added students from another school or workers from another factory they decorated the entrance with purple paper, 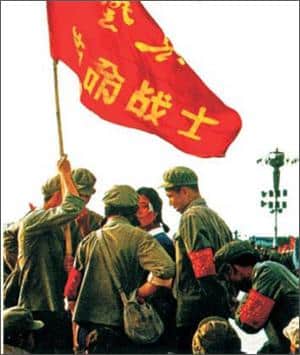 lanterns and a red cloth covered with flowers. People who did not agree with Mao Tse-tung and his teachings were often dragged through the streets and forced to wear dunce caps. The main reason of course was to humiliate. This group in time became more destructive. Even some of China’s highest leaders were taken. The Red Guards demonstrations lasted through fall, and winter of 1966 and well into 1967. The Red Guards highly looked up to Mao they thought of him as a father who shared the same views. Chairman Mao greatly influenced many of their decisions. They stormed on to railroad trains to spread their ideas coast to coast. Many people thought of them as a disorderly young army. Most of their efforts were devoted to wholesale destruction of reputation and careers. One of their best weapons were political posters which were about many high political figures. Political people were not the only ones to be embarrassed, professors and engineers were also humiliated by the young group. Many young people agreed with the Red Guards and their point of views. They felt that schools and universities were being run to produce a small group of highly educated people. Then those people would go ahead to become leaders. They would soon consider they were better than the workers and peasants and it would be like they were under the emperors once again. The Red Guards did not care about anything that they destructed. In Peking, Red Guards attacked and burnt down the British Embassy. In 1967 a mob of the guards stormed the Foreign Ministry. They destroyed some archives, carried away others, and even attempted to kidnap the Foreign Minister but they were unsuccessful.

No one in China could accurately tell you an explanation on of why they organized. Some people think they were inspired because the wanted to become communist leaders after Mao’s death and take over government. Some say their main reason was to make certain politicians get a bad name and have them removed from their potions. Which would make it easier for them to rule in China in Mao’s name.