Cleopatra Vll was born in 69 BC, in Alexandria, Egypt. Despite what people say today, that she was glamorous and beautiful, she was far from it. She is shown on ancient coins with a long hooked nose and masculine features. Although she was not beautiful she was clearly a very seductive woman, and she used this to further Egypt politically. She had a beautiful musical voice. It is also said that she was highly intelligent. She spoke nine different languages, and she was the first Ptolemy pharaoh who could actually spoke Egyptian. She ascended the Egyptian throne after her father, Ptolemy Xll Auletes died in 51 BC. Cleopatra which was seventeen at the time and her brother Ptolemy Xlll, which was twelve, were married because of the terms of her father’s will.

They then ruled Egypt together. In the third year of their reign Ptolemy’s advisers told him that he should rule Egypt by himself. So, because of 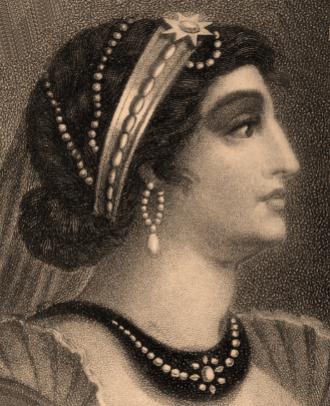 this he drove Cleopatra into exile. Cleopatra then escaped to Syria. She then returned with an army. Ptolemy sent an army to meet with her. At this point, Julius Caesar of Rome arrived in pursuit of an enemy, who was seeking help from Ptolemy. Cleopatra had to roll herself up in a rug so that she wouldn’t get killed while entering Egypt. If she hadn’t hidden herself she would have been killed. When she unrolled herself in front of Caesar he fell in love with her right away.Caesar had to choose which of the Egyptian rulers to help keep the throne. Of course he chose Cleopatra. He then became Cleopatra’s lover. In 47 BC Ptolemy Xlll drowned in the Nile while trying to escape, and Caesar then restored Cleopatra to her throne.

After her older brother Ptolemy Xlll was dead, Cleopatra was then forced by custom to marry her youngest brother Ptolemy XlV, which was about eleven at the time. After Cleopatra and Ptolemy XlV were settled on their joint government basis, she and Caesar went on a two-month cruise on the Nile. It is said that it was then she became pregnant, and she later gave birth to a son. His name was officially Ptolemy XV Caesar, but he was popularly called Caesarion, which means “Little Caesar”. People say that Caesar was not really the father of Caesarion. Although the child strongly resembled Caesar, and so Caesar acknowledged him as his son. After the cruise Caesar then went back to Rome and Cleopatra went back to Egypt. Caesar left three men that were part of the army so that they could protect Cleopatra. In 46 BC he invited Cleopatra to go to Rome to be with him. She then went taking Caesarion with her. That same year in September he celebrated his war triumph’s in which was called the March of Triumph’s. In this march he paraded through the streets of Rome with his prisoners, including Cleopatra’s sister Arsinoe. Caesar spared Arsinoe’s life after she betrayed Cleopatra, but later Mark Antony had her killed after Cleopatra told him to.

Cleopatra lived in Caesar’s villa near Rome for almost two years. He showered Cleopatra with gifts and everything she wanted. It was rumored that Caesar was intending to pass a law allowing him to marry Cleopatra and make their son his heir. It was also rumored that Caesar, who had accepted a lifetime dictatorship and sat on a golden throne in the Senate, intended to become the king of Rome. On March 15, 44 BC a crowd of conspirators surrounded Caesar at a Senate meeting and stabbed him to death. Cleopatra knew that she was also in danger so she quickly left Rome with her protectors. Before or immediately after their return to Egypt, Ptolemy XIV died. It is rumored that Cleopatra had him. Cleopatra then made Caesarion,her son, co-regent. Caesar’s assassination caused lacking in a ruler and civil war in Rome. Eventually the empire was divided among three men. Those men were Caesar’s great-nephew Octavian, who later became the emperor Augustus. There was also Marcus Lepidus and Marcus Antonius, or better known as Mark Antony.

In 42 B.C. Mark Antony called for Cleopatra to Tarsus, to question her about whether she had assisted his enemies. Cleopatra arrived in style on a barge with a gilded stern, purple sails, and silver oars. The boat was sailed by her maids, who were dressed as sea nymphs. Cleopatra herself was dressed as Venus, the goddess of love. She reclined under a gold canopy, fanned by boys in Cupid costumes. Antony was impressed by this glamorous display of luxury. This was as Cleopatra had intended. That night Cleopatra entertained him on her barge, and the next night Antony invited her to supper, hoping to outdo her in magnificence. Unfortunately he failed to do so, but he ended up joking about it in his good-natured, way. Cleopatra didn’t seem to mind his tasteless sense of humor actually she joined right in. Like Caesar before him, Antony was falling in love with her. Forgetting about his responsibilities of being a ruler, he accompanied Cleopatra to Alexandria and spent the winter with her there. Finally, Antony said goodbye to Cleopatra and returned to his duties as a ruler of the Roman empire. Six months later Cleopatra gave birth to twins, their names were Cleopatra Selene and Alexander Helios. It was four years later before she saw Antony again. During that 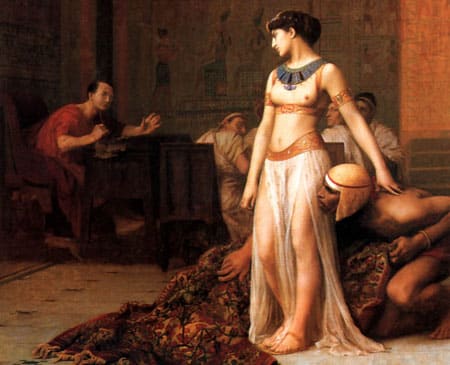 time Antony married Octavian’s half-sister, Octavia. They had three children. In 37 BC, while on his way to invade Parthia, Antony enjoyed another visit with Cleopatra. He hurried through his military campaign and raced back to Cleopatra. From then on Alexandria was his home, and Cleopatra was his life. He married her in 36 BC and she gave birth to another son, Ptolemy Philadelphus. Meanwhile, back in Rome, Octavia remained loyal to her cheating husband. She decided to visit Antony, and when she reached Athens she received a letter from him saying that he would meet her there. However, Cleopatra was determined to keep Antony away from his other wife. She cried and fainted and starved herself so it worked. Antony ended up cancelling his trip, and Octavia returned home without seeing her husband. The Roman people were disgusted by the way Antony had treated Octavia.

They were also angry to hear that Cleopatra and Antony were calling themselves gods. Worst of all, in 34 B.C. Antony made Alexander Helios the king of Armenia, Cleopatra Selene the queen of Cyrenaica and Crete, and Ptolemy Philadelphus the king of Syria. Caesarion was proclaimed the “King of Kings,” and Cleopatra was the “Queen of Kings.” Octavian was extremely mad and so he convinced the Roman Senate to declare war on Egypt. In 31 B.C. Antony’s forces fought the Romans in a sea battle off the coast of Actium, Greece. Cleopatra was there with sixty ships of her own. When she saw that Antony’s cumbersome, badly-manned galleys were losing to the Romans’ lighter, swifter boats, she left the scene. Antony abandoned his men to follow her. Although it is possible that they had prearranged their retreat, the Romans saw it as proof that Antony was crazy for Cleopatra and was unable to think or act on his own. For three days Antony sat alone in the prow of Cleopatra’s ship, refusing to see or speak to her. They returned to Egypt, where Antony lived alone for a time. In the meanwhile Cleopatra prepared for an invasion by Rome. When Antony received word that his forces had surrendered at Actium and his allies had gone over to Octavian, he left his solitary home and returned to Cleopatra to party away their final days. Cleopatra began experimenting with poisons to learn which would cause the most painless death. She also built a mausoleum to which she moved all of her gold, silver, emeralds, pearls, ebony, ivory, and other treasure. In 30 B.C. Octavian reached Alexandria. Mark Antony marched his army out of the city to meet the enemy. He stopped on high ground to watch what he expected would be a naval battle between his fleet and the Roman fleet. Instead he saw his fleet salute the Romans with their oars and joined them. At this Antony’s cavalry also deserted him. His infantry was soon defeated and Antony returned to the city, shouting that Cleopatra had betrayed him. Cleopatra was afraid that he would hurt her, so she left to the monument that housed her treasures and locked herself in, ordering her servants to tell Antony she was dead. When Antony heard this he actually believed it. So he went to his room and opened his coat, exclaiming that he would soon be with Cleopatra. He ordered a servant named Eros to kill him, but Eros killed himself instead. Antony then stabbed himself in the stomach and passed out on a couch. When he woke up he begged his servants to put him out of his misery, but they ran away. At last Cleopatra’s secretary came and told him Cleopatra wanted to see him. Overjoyed to hear Cleopatra was alive, Antony had himself carried to her mausoleum. Cleopatra was afraid to open the door because of the approach of Octavian’s army, but she and her two serving women let down ropes from a window and pulled him up. Distraught, Cleopatra laid Antony on her bed and beat her breasts, calling him her lord, husband and emperor. Antony told her not to pity him, but to remember his past happiness. Then he died at that very moment.

When Octavian and his men reached her monument Cleopatra refused to let them in. She talked with them through the door, demanding that her kingdom be given to her children. Octavian ordered one man to keep her talking while others set up ladders and climbed through the window. When Cleopatra saw the men she pulled out a dagger and tried to stab herself, but she was disarmed and taken prisoner. Her children were also taken prisoner and were treated well. Octavian allowed Cleopatra to arrange Antony’s funeral. After the funeral she took to her bed, sick with grief. She wanted to kill herself, but Octavian kept her under close guard. One day he visited her and she flung herself at his feet, nearly naked, and told him she wanted to live. With Octavian’s permission she visited Antony’s tomb. Then she returned to her mausoleum, took a bath, and ordered a feast. While the meal was being prepared a man arrived at her monument with a basket of figs. The guards checked the basket and found nothing suspicious, so they allowed the man to give the basket of figs to Cleopatra. After she had eaten, Cleopatra wrote a letter, sealed it, and sent it to Octavian. He opened it and found Cleopatra’s plea that he would allow her to be buried in Antony’s tomb. Alarmed, Octavian sent messengers to alert her guards that Cleopatra planned to commit suicide. But it was too late. They found the 39-year old queen dead on her golden bed, with her maid Iras dying at her feet. Two pricks were found on Cleopatra’s arm, and it was believed that she had allowed herself to be bitten by an asp that was smuggled in with the figs. As she had wished, she was buried beside Antony.