Davy was born in 1786 in Greene County, Tennessee. He went to school at 13 years old. But he didn’t like school. He ran away to the woods for 2 1/2 years to avoid being punished for missing days. Davy Crockett’s father was from Ireland and he married Rebecca Crockett. They had 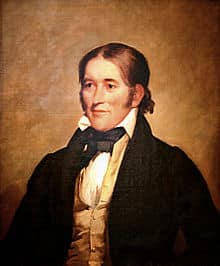 three boys and two girls. Davy liked hunting and killing bears. His father taught him how to hunt deer, kill bears and fish.  In 1808 Davy Crockett married Mary Finley. They had two boys and a girl. His first wife died. Then he married Mary Elizabeth Patton, Elizabeth had two children. Davy loved hunting. He was the best shot with his rifle “Old Betsy”.

He killed wildcats, deer and bears. A story tells that he that Davy killed 105 bears in 3 weeks and he made an alligator do what he wanted him to do. Davy worked on people’s farms. He was a plowboy on a farm, he learned how to make hats, he helped with the cattle, and did many odd jobs. When he wasn’t working he went hunting and roamed the woods. Davy was the best at telling stories. He got to know a lot of people liked him. They elected him to the legislature. He was successful. He had 2 terms. Davy wanted to go fight with the Creeks. But his wife, Finley begged him not to go. The Creeks fought only for their homes. Davy could understand that. He fought in Alabama and Georgia. Davy and other men went into Florida to fight the Creeks. Davy Crockett took his rifle “Old Betsy” and fought for Texas against Mexico at the Alamo. He fought with James Bowie and William Travis in San Antonio at a mission. The Mexicans attacked the mission and Davy Crockett was killed. Davy Crockett was a famous American. He could hunt fish and telling stories. He was good with people and tried to help them. We remember him as a well-loved pioneer.