A deciduous forest, simply described is a forest that is leafless during the winter. Strong species make up this type of forest, meaning that the species can tolerate a wide range of conditions.  In the extreme northern latitudes, the growing season is short causing the trees to be leafless the majority of the year. The deciduous forest is subjected to distinct weather cycles and temperature shifts. In this area of the northeast we experience four distinct seasons, and for a tree species to thrive it must adapt to the stresses corresponding to each season. 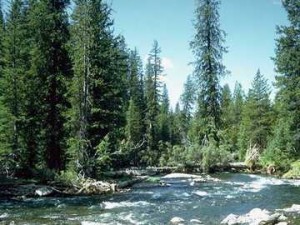 Developed forests consist of four layers. The layers are: canopy, sub canopy, shrub, and ground cover. This layering affect benefits the diversity of the ecosystem by providing a rich variety of habitats. It is a result of adaptation and competition for sunlight and shows the continuing process of succession. The stratification of a forest, by intercepting the some of the available sunlight at various locations, also creates micro-climates with a wide range of temperatures and moisture conditions. The soil composition also greatly influences the amount of water that is available to the plant species. The composition of the soil, the various layer development and the nutrient content are major factors in the survival of specific species of trees. Climate and soil type are a-biotic factors, meaning they are outside and uncontrollable by the species itself. Insect infestations such as Gypsy moths and disease such as the Chestnut blight are also a-biotic factors that in a relatively short period of time can severely thin out or destroy a specific species of tree.  It might just add enough stress to one species, where a competing species will then out-compete it and then dominate.

The cycle of dropping the leaves when the days grow short is vital for the replenishment of nutrients in the soil. This litter layer decomposes and returns organic material to the trees through leeching and decomposition into the upper soil layers where they can be reused by re-absorption through the roots.