Throughout history, navies have made significant impacts in the technological development of human kind. These impacts range from improvements in metal technologies made while perfecting the cannon to the advent of cybernetics, which allowed more precise targeting of weaponry. One of the more sophisticated developments in naval history has been the invention of the submarine. The submarine was born in 1620 as a leather-covered rowboat built by Cornelius Drebbel. After Robert Fulton came up with a more modern prototype in 1800, the military advantages of a nearly invisible warship were quickly divined. However, they remained unrealized for quite a while. Although Fulton probably foresaw that his invention would be used for war, he hardly could have envisioned it launching projectiles with the capability to level entire countries. However, after a series of innovations in nuclear missile and submarine designs, the submarine-launched ballistic missile has become an integral part of our naval weapons arsenal.

To understand the need for the development of nuclear missile submarines, there is a need to examine the political climate of the 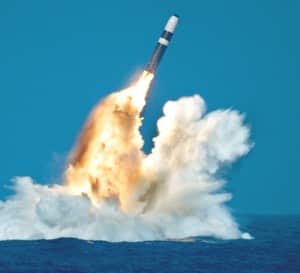 world in the era after World War II. The realignment of the superpowers after the war resulted in a unique situation. The two major naval powers of the day, Great Britain and the United States, were now allied against the greatest land power in history in the Soviet Union.  In the period from 1955 to 1965, the advantage was heavily in favor of the U.S. As the United States had developed the atomic and hydrogen bombs first, they obviously gained a head start which developed into a decisive nuclear advantage. This advantage acted as an effective deterrent to any Soviet movement into Western Europe. However, as the Soviet nuclear arsenal expanded (mostly during the Kennedy administration), it became necessary to effect a balance in the area of conventional warfare or to make more inroads in nuclear weapons development. Before this could be accomplished, however, advancements in submarine technology had to made as well.

The submarines of World War II, although effective in their roles, were rather primitive. A noisy, slow, shallow-diving sub would hardly be a capable missile submarine as it could be easily detected and destroyed. Even so, before the end of the war, there were intelligence reports in America that the German Navy had developed a U-boat capable of towing or carrying V-2 rockets to launch sites near the U.S. east coast. Although these reports turned out to be false, the Germans had been developing a type of submersible barge to tow V-2s.  This scare prompted the American development of ballistic missile submarines.

Experiments in submarine design had concentrated mainly on improving the quality of power plants (usually diesel or electric engines), achieving better maneuverability through new hull designs, and developing quieter propulsion systems that achieved better top speeds. A nuclear reactor power plant would meet all of these objectives, but the development of a nuclear-powered submarine was not without obstacles. As the U.S. and the Soviet Union expanded their land-based nuclear arsenals, the weapons-grade uranium needed for missiles was becoming quite scarce. In America, the Air Force actually fought against using nuclear material for Naval submarine reactors, as it would cut into the production of the nuclear missiles that they controlled. After the USSR leveled the playing field by expanding its number of missiles, however, the nuclear submarine desperately needed to be built to tip the balance of power back towards the West.

In 1955, the most advanced submarine in terms of these nuclear developments was the USS Nautilus. With excellent maneuvering facilitated by her Albacore hull design, the Nautilus had virtually unlimited range thanks to her nuclear power plant.  In fact, the Nautilus became the first submarine to navigate under the polar ice cap in 1958. It could be said that the range of a nuclear submarine was now only constrained by the physical limits of her crew. In 1960, the USS Triton, a larger version of the Nautilus, circumnavigated the earth, becoming the first ship to accomplish this feat underwater.

Like the submarine, the missiles that would eventually be launched from their hulls underwent a similar development history. The first submarine missiles were simple cruise missiles mounted on the hull. These missiles, like the Loon and the Chance-Vought Regulus, were really nothing more than converted V-1 buzz bombs. Friedman calls these projectiles “the direct predecessors of the current fleet ballistic missiles.”  The only problem with these missiles was their nearly complete lack of guidance systems. V-1 rockets, and the improved Loon and Regulus missiles, were terminal guidance rockets. The V-1 had a Circular Error Probable (CEP) rating of eight nautical miles. When the rocket reached the area of its target, its engine would be shut off by a timer. The high CEP meant that the missile could detonate anywhere in an eight mile circle around the target. Obviously, this kind of accuracy was unacceptable. With the Loon and the Regulus, this problem was combated by placing a second guidance source on another submarine closer to the intended target. The Loon missile had a device which would allow the second submarine to blow off the missile’s wings and tail and cause it to fall “in a more predictable trajectory… lowering CEP to half a mile.”  The Regulus bettered this with the addition of steering components for the terminal guidance submarine. As these missiles became more successful, a vigorous development program was planned by the U.S. Navy. However, the invention of the Polaris missile precluded this.

With the development of the hydrogen bomb, the U.S. and other superpowers had a weapon with 1000 times the power of the bombs

dropped at Hiroshima and Nagasaki. However, the size of these missiles made them available for use only on B-36 or B-52 bombers. The Polaris missile changed this. The American Polaris class missile submarines, first launched in 1960, incorporated the new, smaller missile design. The first of these subs to launch a ballistic missile was fittingly called the George Washington, but it was her sister ship, the Ethan Allen, that was the first submarine to launch a nuclear missile with a live warhead in 1962.

With nuclear missiles now a fixture in the United States Navy, later developments focused on making them lighter and more powerful. The Poseidon missile, first launched in 1968, accomplished these goals. A two-stage rocket with many more multi-impact reentry vehicles (MIRVs) than its predecessor, the Poseidon also had a feature that made the U.S. rush it into active service. Specifically, fleet submarines of the now outdated Polaris class could launch the Poseidon from their Polaris tubes with minimal modifications.

In the quest to develop even better submarine-launched missiles, the next installment was the Trident missile. The Trident is a larger missile than both the Polaris and Poseidon and it is also several times more powerful. Perhaps the most important innovation on the Trident missile is its guidance system. The Polaris and Poseidon, while quite powerful, required heavy hardware packages to guide their MIRVs to various targets. The new Trident guidance package is much lighter. The system has the ability to sight on a star while tracking towards the target, which gives the Trident two advantages over the Poseidon. First, the missile meets its predecessor’s accuracy objectives while achieving a greater range.  Second, the lesser weight of the Trident guidance package allows for more powerful warheads. The Trident I missile carries eight 100 kiloton MIRVs, and its newer relative, the Trident II carries eight 475 kiloton warheads.  Obviously, these missiles are some of the most powerful in service with the United States military at this time.

Even with the massive destructive capability of the submarines discussed here, further developments are being tested even now. Specifically, the new Seawolf class submarine is the latest United States offering, though it has made slow progress due to budget cuts. It remains to be seen if the future holds an even more powerful submarine launched ballistic missile. Also, it is impossible to tell which nation will be the first to develop it.