DNA or nucleic acid is a polymer of nucleotides.  A nucleotide consists of 3 molecules: 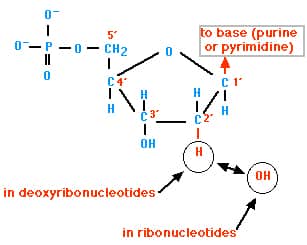 A and G are purines and T,C,U are pyrimidines.

The structure of nucleosomes 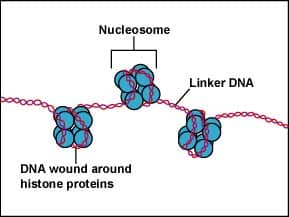 A closer look at chromosomes and chromatin shows that they are not made up of DNA alone (see photo at the end of the note).  DNA is wound around proteins called histones in groups of eight.  The structure appears as beads on a chain.

The DNA and eight histones form a structure called a nucleosome.  DNA and proteins makeup the majority of the  approx. 2m of genetic material that makes up the human genome.  Nucleosomes allow the large amounts of material in human DNA to be packaged into a size small enough to fit into a cell.

DNA nucleotides are linked together by covalent bonds into a single strand.

The phosphates and sugars form the backbone of the DNA strand.  Hydrogen bonds form between the nitrogenous bases of each strand of DNA forming a structure that resembles a ladder;  the nitrogenous bases are the rungs of the ladder and the sugars and phosphates form the sides of the ladder.  The sides of the ladder run in an antiparallel configuration; the sugar-phosphate bonds are laid down in a 5’ to 3’ configuration – a phosphate is bonded to a #5 carbon followed by another phosphate bonded to the #3 carbon which joins the nucleotide to the #5 carbon of the next sugar in the backbone.  The opposite side of the double helix is reversed – the phosphate is bonded to the #3 carbon first. 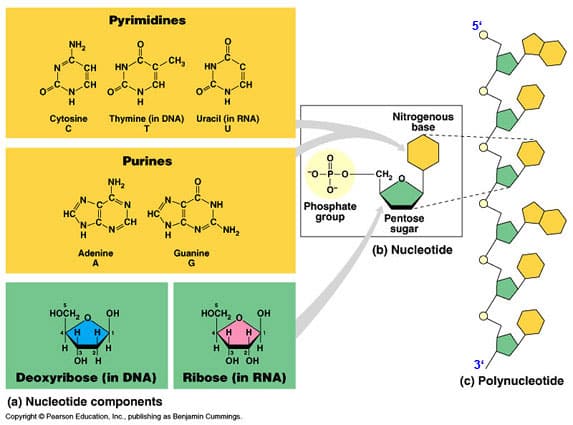 Draw a simple diagram of the molecular structure of DNA

Only 3 rings can fill the space between the backbones.

The correct number of bonds between the two nitrogenous bases limits which bases can be paired.

Only a small proportion of the DNA in the nucleus constitutes genes, the majority of DNA consists of repetitive sequences.

Genes are determined by the order of nucleotides in the double helix.

Some genes hold the instructions for the production of polypeptides.

Some genes regulate the expression of other genes.

Not all DNA codes for genes – the function of a large amount of DNA is unknown.

These portions of DNA exist in the form of repetitive sequences.

Only a small percentage of all DNA codes for genes or gene regulation.

In chromatin, gene sequences that are transcribed for use are usually less tightly wound than the other sections of chromatin. 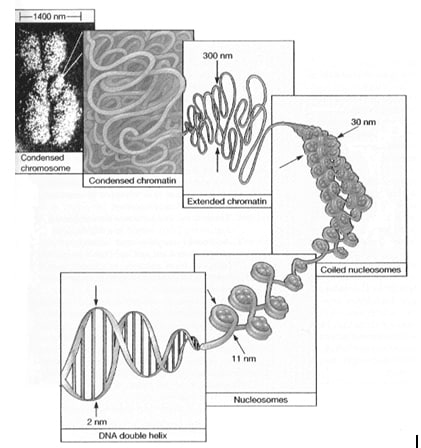 Great information! I’ve been looking for something like this for a while now. Thanks!