In Nathaniel Hawthorne’s short story Dr. Heidegger’s Experiment, one of the central ideas of the story revolves around the idea of reality versus illusion. Of course the overriding theme of the story dealt with the ethical dilemma of changing old age into youth, still a major part of how the story was interpreted involved a personal decision on how you took the story; as literal or figurative.

The perception that appealed to me the most was reading the text as literal, and concluding the experiment as reality rather than a figment of 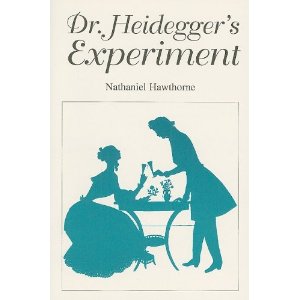 imagination caused by the intoxicating brew. A couple of points that Hawthorne made led me to believe that the story was indeed a true testament of the powers of the magical water. The first is rather evident and straight forward because it happens before a single person even raises glass close to their lips. I am of course referring to the fifty-five year old rose that was given to Dr. Heidegger on the eve of his wedding by his bride to be. Heidegger places the rose in the water so there could be proof of the mysterious water’s power, but in the same act of proving its power to his guests Hawthorne proves to us the power of the water because when the rose regains life nobody was drunk or had even attempted to drink the water.

“The crushed and dried petals stirred, and assumed a deepening tinge of crimson, as if the flower were reviving from a death-like slumber;”(page 3) It is that clear cut, and completely undeniable considering that five people witnessed the act and not one had the slightest objection. After the first drink of the potion until the last, I was still led to the opinion that what the guests were experiencing was in fact real and completely genuine. At this point I will point out that it is at this exact moment where the issue of reality versus illusion begins to take shape. However, while we left to toil with this intriguing notion, it seems quite intentional on the part of Hawthorne to make us decide on which side we are for. I would say his reasoning for dividing us would be to point out that while it may be real or a delusion it’s ethical and moral message should be clear cut to everyone. Backtracking for a second though, I would also like to dispute the argument of illusion as some people fight in favor, of on the sole occurrence of the old images in the mirror.

It seems to me that as I mentioned above, a ploy set by Hawthorne to add a little twist to the story, and give us the readers something to think about. While we could argue that what they are seeing is a direct influence of the potion it would be far stretched to say that what they felt and how they acted was fake too. Keeping in mind that these people are very old and probably way passed their days of jumping around dancing about, it is pretty hard to say that this water gave them enough energy and vigor to move around like youngsters but still be contained in their old bodies. The men especially would have been hurt while the struggled like young men in the favor of the widow as they had done with such ease.

It is also a fact the Doctor himself had seen, and without the prejudice of the drink I might add, the transformation because he refers the men as “gay young men” (page 7) when the widow asks for his hand in a dance. A final example of the water’s power should not be sought any farther than the last few pages upon which it can be found that the life of a deceased butterfly was once again made possible by the healing nature of the water. As it clearly written the story is not told from the stand point of the butterfly so that it might be influenced by the drink, it is told from afar, and all who were in the story, especially the Doctor, could testify that they witnessed the rebirth of the insect as it happened to land on the head of the Doctor.

The points I have made provided ample proof in my own mind to the notion that this story in fact was not a delusionary tale, but rather a fictional tale meant to be perceived as real. It is, however debatable, but what is not is the underlying message of not to mess with mother nature, and how man if he could regain his youth, man would probably make the same mistakes twice if he was in fact given the chance to “do it all again.”