Carduelis tristis (American goldfinch) is a bird that suffers from a great risk of predation and in some areas is found to select a smaller clutch size of 3-6 eggs rather than a larger clutch of 7 or more eggs. The purpose of the experiment was to determine whether the risk of predation has an impact on the size of the clutch laid.  Results showed that as clutch size increased the rate of predation increased as well. It was therefore determined that clutch size and that smaller clutches are naturally selected for because they a greater chance of reproductive success as they are less affected by predation.

Carduelis tristis (American goldfinch) is a small finch that is distinct due to the males bright yellow body contrasting with black wings and a black cap. The American Goldfinch is one of the common songbirds found in dunes. They are one of the latest nesting birds as mating takes place in late summer, as does nest building, typically nesting in July and August. The nest is built in late summer up to 10 m off the ground in the terminal branches of a bush or tree. The eggs will hatch about 15 days after incubation and 11-13 days after hatching the fledglings leave the nest. American Goldfinches and their eggs are vulnerable to a variety of predators, including cats, weasels, snakes, squirrels, jays, and Sharp-shinned and Cooper’s hawks. Recent results from the Breeding Bird Survey in the United States have also shown a decline in the population at a mean rate of 4 percent per year (Hayakawa 1994).

Slagsvold (1982) found that clutch size varies depending on the location of the American Goldfinches nest. Lack (1947) attempts to explain this by hypothesizing that natural selection will only maximize reproductive rate to the extent that proper resources are still available. He suggested that because there is greater competition in tropical areas than in higher latitudes, fewer resources are available and therefore clutch size is smaller. Lack hypothesized that the average clutch size is largely dependent on the number of young the parents can successfully raised. In this experiment, the American goldfinch was observed to determine the risk of predation associated with different clutch sizes.  Due to the fact that predation risk would affect the resources available to the parent birds it is hypothesized that as the risk of predation increases, clutch size would decrease.

To conduct this experiment a population of Carduelis tristis (American goldfinch) was studied in Baldwin Flats, near the University of Western Ontario in London. Between July 1, 2010 and August 5, 2010, all active nests were located. Ever egg was marked with an identifying marker and the frequency of each clutch size was recorded. As the eggs hatched, each hatchling was tagged with an identifying band. On August 5, the number of surviving goldfinch nestlings was recorded and the risk of predation for each clutch size was calculated.  A chi-squared test of goodness of fit was performed on all data. Pairwise comparisons were done on each pair of data points. 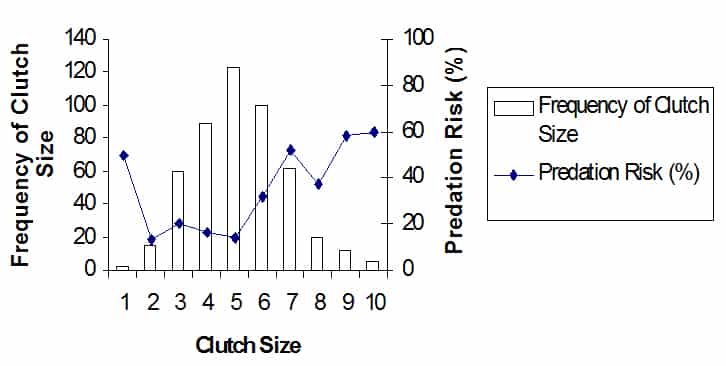 Fig. 1. Predation risk and Frequency of Clutch size for Carduelis tristis depending on clutch size

American goldfinch’s rate of predation was significantly correlated with clutch size.  The Chi-Squared test for goodness of fit determined that all results were significant with the exception of clutch sizes of 6 and 8.  It was shown in Figure 1 that as clutch size increases, predation risk also increases. This demonstrates a positive relationship between clutch size and predation rate. This supported my hypothesis that as clutch size increases, predation risk also increases.  This phenomenon is due to a number of causes. Slagsvold (1984) showed that birds subjected to a high rate of nesting failure may be expected to lay clutches containing fewer eggs than those which suffer little nesting failure. He suggested that due to a high investment of time and energy that goes into a larger clutch, a smaller clutch may be preferable if the first brooding is not successful or suffers from predation. This is an explanation as to why a clutch size of 3-6 eggs was more commonly found than greater clutches of 7-10 eggs. Larger nests containing more eggs are also more likely to attract the attention of predators leading to loss of eggs due to predation and a decrease in that nestings success.  Specific reasoning behind the correlation of clutch size and predation must be further investigated. It is not possible to determine the relationship based on the data collected in my experiment.

Slagsvold, T (1984). Clutch size variation of birds in relation to nest predation: on the cost of reproduction. Journal of Animal Ecology 53: 945–953