Fluoride is a mineral that occurs naturally in almost all foods and water supplies. The fluoride ion comes from the element fluorine. Fluorine, the 13th most abundant element in the earth’s crust, is never encountered in its free state in nature. It exists only in combination with other elements as a fluoride compound.

Fluoride is effective in preventing and reversing the early signs of tooth decay. Researchers have shown that there are several ways through 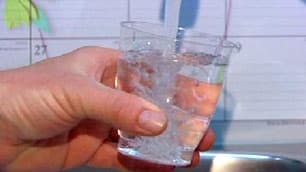 which fluoride achieves its decay-preventive effects. It makes the tooth structure stronger, so teeth are more resistant to acid attacks. Acid is formed when the bacteria in plaque break down sugars and carbohydrates from the diet. Repeated acid attacks break down the tooth, which causes cavities. Fluoride also acts to repair areas in which acid attacks have already begun. The remineralization effect of fluoride is important because it reverses the early decay process as well as creating a tooth surface that is more resistant to decay.

Community water fluoridation is the adjustment of the amount of the beneficial trace element fluoride found in water to provide for the proper protection of teeth. Fluoridation has been widely utilized in this country since 1945. It does not involve adding anything to the water that is not already there, since virtually all sources of drinking water in the United States contain some fluoride. Fluoridation is a form of nutritional supplementation that is not unlike the addition of vitamins to milk, breads and fruit drinks; iodine to table salt; and both vitamins and minerals to breakfast cereals, grains and pastas.

The protection of fluoridation reaches community members in their homes, at work and at school — simply by drinking the water. The only requirements for the implementation of fluoridation are the presence of a treatable centralized water supply and approval by appropriate decision makers.

Nearly 145 million Americans are currently receiving the benefits of optimally fluoridated water. With the 1995 enactment of Assembly Bill 733 in California, ten states and territories in the United States now mandate fluoridation through legislation. Besides California, these include seven other states (Connecticut, Georgia, Illinois, Minnesota, Nebraska, Ohio and South Dakota), as well as the District of Columbia and Puerto Rico. Three states (South Dakota, Rhode Island and Kentucky), as well as the District of Columbia, have achieved the ultimate success with 100 percent of their treatable community water systems providing the benefits of fluoridation to their citizens.

While safety has been an issue frequently raised by those opposed to fluoridation, scientific data from peer-reviewed clinical research provide overwhelming evidence that the adjustment of fluoride levels in drinking water to the optimal level is undoubtedly safe. Hundreds of studies on fluoride metabolism have tracked the outcomes of ingested fluoride. Ingested fluoride essentially travels three metabolic pathways. It is either excreted by the kidneys, absorbed by the teeth or taken up in the skeleton.

At optimal levels  fluoride has never been demonstrated to cause skeletal fluorosis or other bone problems. On the contrary, there is mounting evidence that continued exposure of individuals to low levels of fluoride, as in optimally fluoridated drinking water, results in a decrease in osteoporosis and a decrease in concurrent susceptibility to vertebral fracture. Furthermore, there is no evidence of increased morbidity or mortality from any disorder for those with lifetime exposures to optimally fluoridated drinking water.

Those opposed to water fluoridation claim that exposure to fluoridated water increases an individual’s risk of suffering from several forms of cancer. Again, the overwhelming weight of scientific evidence indicates otherwise. Over 50 studies have evaluated the potential relationship of water fluoridation and cancer mortality. None found any credible evidence that exposure to water fluoridation is in any way related to an increased risk of cancer in humans. A number of national and international scientific commissions, after reviewing all of the available scientific literature, also concluded that water fluoridation was safe and that it in no way related to increased risk to humans of any form of cancer. Finally, a 1990 study of fluoridated and fluoride-deficient communities by the U.S. National Cancer Institute revealed no link between exposure of any populations to fluoridation and the incidence of many different types of cancer occurring in a 14-year period.

Mottled enamel or dental fluorosis has been claimed to be an indication of the “toxic effects of fluoridation” by those opposed to fluoridation. Technically, dental fluorosis is a developmental defect of enamel that can occur when a higher than optimal amount of fluoride is ingested at the same time as the stage of tooth development when enamel is being formed. The severity of the fluorosis is directly related to the age of the child at exposure, the type of exposure, the level of exposure, and the duration of exposure.

It is important to note that fluorosis can only occur during the period when teeth are developing. Once teeth have formed, fluorosis can no longer occur. The mildest form of dental fluorosis may appear in about 10 percent of those exposed to optimally fluoridated water. Most mild to moderate fluorosis occurs not from the ingestion of properly fluoridated water, but from the unnecessary and inappropriate prescribing of fluoride supplement tablets or drops for children in fluoridated areas and the inappropriate ingestion of large amounts of fluoride-containing toothpaste by young children not properly supervised during toothbrushing. The presence of dental fluorosis at any aesthetic level is not related to any other adverse conditions in humans, nor is there any evidence to show that dental fluorosis is a precursor to any disease or dysfunction. Mild to moderate dental fluorosis is no more a pathological condition than is having freckles.

There has never been a single valid, peer-reviewed laboratory, clinical or epidemiological study that showed that drinking water with fluoride at optimal levels caused cancer, heart disease, or any of the other multitude of diseases proclaimed by very small groups of antifluoridationists to be caused by fluoridation.

Because fluoride is so effective, those fortunate enough to be provided with fluoridated water can count on an up to 40- to 50-percent reduction in the number of dental cavities they would have experienced without fluoridation. Fluoridation is an extremely cost-effective public health measure because the technology is so simple and the fluoride so inexpensive. Studies indicate that a $100,000 investment in water fluoridation prevents 500,000 cavities. Moreover, for each dollar invested in fluoridation, over $80 in dental treatment costs are prevented, amounting to an 80:1 benefit-to-cost ratio. Few disease prevention efforts, public or private, achieve that level of return on investment.

I choose NOT to fluoridate, but do I have that choice? No. If you want to have non-food grade fluoride in your water I respect that, but why does the entire Queensland population have to be forcefully medicated?The only way to remove fluoride from the water is with a reverse-osmosis filter which also takes out all the other minerals. So then you have to pay for some sort of system to put it pack in.It’s really frustrating.I was told that the original reason why fluoride was introduced into the public water system in America was because an Aluminum manufacture had… Read more »