Gallium, atomic number 31, is very similar to aluminum in its chemical properties. It does not dissolve in nitric acid because of the 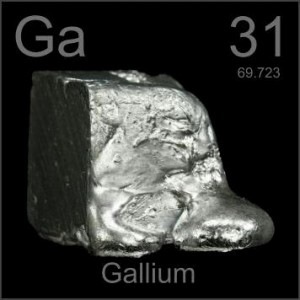 protective film of gallium oxide that is formed over the surface by the action of the acid. Gallium does however dissolve in other acids, and alkalies.   Gallium was discovered (1875) by Paul Emile Lecoq de Boisbaudran, who observed its principal spectral lines while examining material separated from zinc blend. Soon after he isolated the metal studied its properties, which coincided those that Dmitrii Ivanovich Mendelev had predicted a few years earlier for eka-aluminium, the then undiscovered element lying between aluminum and indium in his periodic table. Though widely distributed at the Earth’s surface, gallium does not occur free or concentrated in independent minerals, except for gallite. It is extracted as a by-product from zinc blend, iron pyrites, bauxite, and germanite.

Silvery white and soft enough to be cut with a knife, gallium takes on a bluish tinge because of superficial oxidation. Unusual for its low melting point (about 30 degrees C, 86 degrees F), gallium also expands upon solidification and supercools readily, remaining a liquid at temperatures as low as 0 degrees C ( 32 degrees F ). Gallium has the longest useful liquid range of any element. The liquid metal clings to glass and similar surfaces. The crystal structure of gallium is orthorhombic.  Natural gallium consists of a mixture of two stable isotopes: gallium-69 (60.4 percent) and gallium-71 (39.6 percent). Somewhat similar to aluminum chemically, gallium slowly oxidizes in moist air until a protective film forms, and it becomes passive in cold nitric acid. Gallium has been considered as a possible heat-exchange medium in nuclear reactors, although it has a high neutron cross section. Radioactive gallium-72 shows some promise in the study of bone cancer; a compound of this isotope is absorbed by the cancerous portion of the bone. The most common use of gallium is in a gallium scan. Gallium scans are often used to diagnose and follow the progression of tumors or infections. Gallium scans can also be used to evaluate the heart, lungs, or any other organ that may be involved with inflammatory disease.

A gallium scan usually requires two visits to the Nuclear Medicine Department. On the first day you receive an injection in a vein in your arm, you will then be scheduled to return between 2 and 5 days later, depending on your diagnosis. Your initial scan can take several hours, while you lay on a stretcher, or imaging table, and a camera is positioned above you or below you, taking pictures as it moves slowly along the length of your body.  No special preparation must be taken before the scan, and the gallium is usually excreted through the bowel.