Georges Bizet, who is best known for his opera, Carmen, has remained somewhat of a mystery as far as his musical education, social life, and personal life. He is not like so many other composers and musicians of the Romantic Period who led a highly publicized life like Hector Berlioz, Peter Ilyich Tchaikovsky, or Johannes Brahms. He spent his short life devoted to music and he did not quite make it into the limelight like these other Romantic composers. The most believable explanation for his obscurity would be the lack of scandal in his life. He had a happy 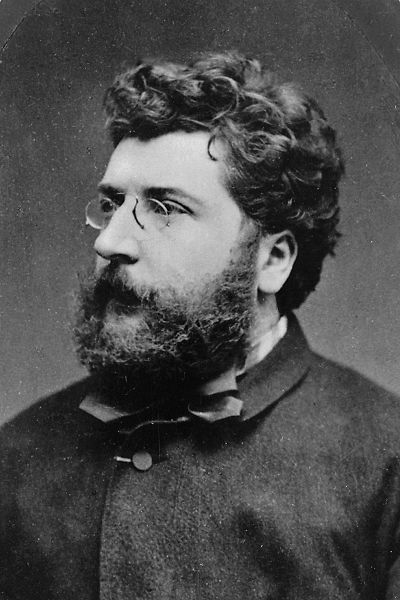 childhood, was well awarded with musical scholarships, and a happy marriage. Georges Bizet grew up in a musical house. His father was a singing teacher and his mother was a well-known pianist who had attended the Paris Conservatory. His parents encouraged him in music. His father was confident that his son would become a great musician. His father was actually too supportive of his musical education. He had been known to hide young Georges’ other school books so he would not be distracted from his musical studies. He received his first music lesson from his mother when he was just four years old. She was teaching him to read music at the same time she was teaching him his alphabet.

Bizet was enrolled in the Paris Conservatory when he was nine years old. This was a special exception arranged by his uncle who taught at the Conservatory, since Bizet was still a year younger than the minimum age requirement. Here he studied piano, organ, singing, harp, strings, woodwinds, and composition. His instructors were the composers Charles Gounod, who is known for his opera Faust, and who is considered the greatest musical influence in Bizet’s life. And Jacque Halevy, who wrote the opera LaJuive, is also considered an important musical influence. He had a unique, unstructured teaching style. Halevy would listen to and correct his students but he would never require them to do any specific types of composition. This was to affect Bizet throughout his life as he would be known to start and abandon work after work. This was blamed directly on Halevy’s lack of discipline. At age fifteen, Halevy tried to convince Bizet to go and compete for the Prix de Rome. Bizet refused sighting his immaturity and need for additional background.

During his time as a student he wrote Symphony in C Major (1855), which was not performed during Bizet’s lifetime, but from it’s first performance in 1935 it has become an established symphony in a standard repertoire. Bizet won a number of awards during his time at the Conservatory including First prize in piano when he was fourteen. He also won a First Prize in fugue and organ when he was seventeen; the year of his Symphony in C Major. Bizet remained at the Conservatory until he was eighteen.

Bizet first competed for the Prix de Rome when he was eighteen. The competition ended in a tie and the judges decided not to award a first prize but two second prizes instead. Second prize was free tickets to all of the lyric theaters in Paris. This in itself would have been a nice prize but not in comparison to spending four years in Rome studying music. None the less, the prize proved to be useful as Bizet’s next composition turned out to be a theater piece. Finally on his second attempt at the coveted prize he was awarded the Prix de Rome when he was nineteen. This prize entitled him to four years at the Villa Medici in Rome with all expenses paid. It was in this same year that he tied for first place in a contest sponsored by Jacques Offenbach who was trying to raise awareness of the operetta, then very popular in Paris. All contestants were given the same libretto, Le Docteur Miracle. Bizet’s winning composition was produced at a small Paris theater. Ten days after his arrival in Rome Bizet was asked to play at one of the Villa Medici’s Sunday evening dinners. Of his experience Bizet said, “I had a great success, it was the first time since M. Schnetz has been director that a musician has been heard and applauded at the Academie. It is fair to say that there are no pianists in Italy, and if you can play your scales with both hands you are regarded as a great artist.” This is a great example of Bizet’s modesty. Bizet had very positive things to say about his stay in Rome. He loved the Academie and learned to love Italy and its people. He had even hired a tutor to teach him Italian.

After attending Villa Medici Bizet considered returning to the Paris Conservatory as an instructor or he thought of becoming a concert pianist. He decided against both and decided to return to Paris to be an operatic composer. While working on his first opera he supported himself by teaching private piano lessons to students who wanted to learn for social purposes. He arranged many opera scores for piano, and also composed third rate dance scores to make money. His first major opera was La Guzla de l’Emir which was accepted by the Opera- -Comique 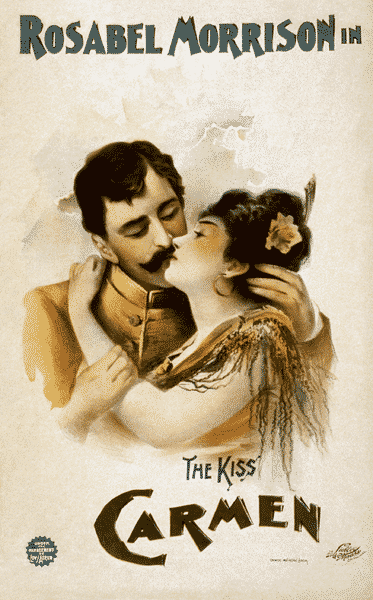 for production but it was never presented. Bizet withdrew it himself because only one work by any composer could be underwritten by a money grant and Bizet thought he could write better. In it’s place he submitted Les Pecheurs des Perles (The Pearl Fishers), which used many of the melodies from La Guzla de l’Emir. This opera was accepted and presented when Bizet was twenty four. It was not a success. It was received poorly by both the public and the press. It was dropped after only eighteen performances but has since become a permanent repertoire of the Paris Opera-Comique since 1932.

His next work was another opera La Jolie Fille de Perth (The Fair Maiden of Perth). While this opera was in rehearsal Bizet announced his engagement to Genevieve Halevy, the daughter of Bizet’s teacher from his days at the Conservatory. This was the only opera Bizet ever wrote that received good reviews on it’s premier performance from both the public and the press. Next he wrote a melodrama, L’Arlesienne (The Girl From Arles). This was his attempt at revitalizing the melodrama form. It’s success was short lived however, but the music was so well liked that Bizet made an orchestral suite from it and it became known as L’Arlesienne Suite #1.  Bizet’s next and best known opera was to be Carmen. This opera was based on a play by Prosoer Merimee. The opera was prepared for the Opera- Comique and in the tradition of that theater included spoken dialogue. The opera was not well received at first but it held the public’s interest. It went on for thirty one performances. The Carmen that we know today has evolved over many years and at the hands of many composers and musicians. For example, the original version included spoken dialogue taken from the original Merimee story. When it was performed just four months after Bizet’s death Ernest Guiraud substituted recitatives for the original spoken dialogue. Because these took longer, many cuts in the original libretto had to be made. Carmen was not a great success until years later when it was performed in England.

There have been rumors surrounding Bizet’s tragically young death. Some say that the unenthusiastic reception of Carmen prompted his early death. The actual cause was throat angina which he had suffered since he was seventeen. These bouts were always followed by emotional crisis leaving Bizet in the state of nervous breakdown. Bizet described his illness in a letter to his friend as, “colossal angina, imagine a double pedal from A flat to E flat going through your head from ear to ear”. His condition would improve for a few weeks and then would reoccur. Toward the end of his life Bizet was confined to a wheelchair and complained of fits of suffocation. Shortly before Bizet and his family were to move to the small country town of Bougival, he suffered a severe rheumatic attack, complete with high fever, and total immobility of his arms and legs. Country living seemed to make him well for a time, but his illness finally did him in on June 3,1875, at the age of thirty six. Bizet left behind not only his wife and young son but also left behind a great opera with a timeless story.