In Citizens and Nation, Gerald Friesen, suggests a structure for understanding Canadian history based upon four 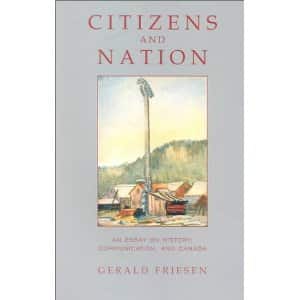 epochs, each centered upon a principle communication medium. According to Friesen, Canada is a story of communication that changes from the “oral-traditional” world of pre-contact Aboriginal people to the “textual-settler” household of immigrants and finally to the “print-capitalism” of the nineteenth and twentieth centuries. This essay will examine these three epochs, which Friesen refers to as “oral-traditional”, the “textual-settler”, and the “print capitalism” periods. Through the exploration of these three epochs, Friesen attempts to create a synthesized national history from the vast and diverse geographic space called Canada, as well as to integrate the presence of Aboriginal peoples throughout the entire narrative. Contrary to Friesen and Innis, this paper will demonstrate that the Europeans, and their ability to disembody and spread knowledge, allowed complete dominance of European culture in Canada, limiting or eliminating the influence of Aboriginal cultures upon Canadian identity and institutions. The dominance of European culture in Canada can be seen as ethnocentricity, the tendency to look at the world primarily from the perspective of one’s own culture. Redolent of ethnocentricity, was the European’s assumptions about the lesser place of Aboriginal peoples in Canada.

For the first epoch “oral-traditional societies” Friesen relies on Gradon Mcrea’s documentary film, Summer of the Loucheax: Portrait of a Northern Indian Family. The film relates the life story of Grandmother Andre and four generations of a Gwich’in (Dene) family. The family is immersed in the age-old tradition of time and space through their oral story telling, as they venture through their daily lives at their camps on the Mackenzie and Tree rivers in the subarctic lands of northern North America. Through Andre’s ‘oral-traditional society’ she passed her cultural ideas on to the generations that followed her – just as she had learned from those who came before her.

Although Friesen acknowledges Aboriginal individuals as one of the original peoples of Canada, he recognizes that their accounts have not been included into the tradition of other Canadians, because of this, “the expression of identity, its interest in how ideas and aspirations are conveyed within large social groups, and its concentration on this particular place” (Friesen, 7) is nevertheless connected to Canada’s earlier historical writing. The spoken word held great importance in traditional societies and also had a flexibility that is often precluded in a textual world. Friesen argues that it is the oral traditions of Aboriginal peoples, their connection to place and their political acts of commonality and struggle, that lie at the heart of today’s Canada. He builds on Harold Innis’ argument that “we have not yet realized that the Indian and his culture were fundamental to the growth of Canadian institutions” (Friesen, 11).

Friesen implies that modern Canadians recognize the link between people and place because of Canada’s Aboriginal heritage. The places where people now live, Friesen believes, “have been occupied from time immemorial – that is from the earliest versions of time and space – by the ancestors of individuals who live in these locations today” (Friesen, 44). While examining Aboriginal accounts of decision-making and group action, Friesen is struck by “the remarkable inclusiveness with which Aboriginal people approached collective action” (Friesen, 49). Friesen finds that Aboriginal people “emphasize community-wide discussion, the necessity of collective readiness for action, the absence of coercion, and the evaluation of intangible as well as tangible factors that might shape events. [These processes] make thought, action, and relations with the environment inseparable” (Friesen, 49). However, as the Europeans and missionaries came and permeated the Aboriginal peoples space, their children were prohibited to speak their language or follow their traditional customs. As a result, they often became ashamed of their language, culture and family. The oral tradition is believed to be the most important way of passing on knowledge, and through the missionaries interference with Aboriginal people, their oral traditions were, if not eliminated substantially decreased.