In order to produce as much ammonia as possible several factors need to be considered. The balanced chemical equation for this reaction is:

Therefore a manufacturer would want to affect this equilibrium is such a way that the reaction would constantly wanted to shift to the right. The first way this could be achieved is through increasing pressure on this equilibrium system. The molar ratio between the reactants and product is 4:2. Therefore according to Le Chatelier’s Principle, if you increase the overall pressure (the force per unit area) on the system, the equilibrium will attempt to resist this change by shifting to the side with less particles which in this case of the product side. The same effect can be yielded by reducing the volume in which the equilibrium exists which increases the concentration of the reactants/ products and would again shift to the side with the lower molar ratio; hence to the right. In addition by increasing the initial concentration of N2 or H2 in the equilibrium, the system will also shift to the right in order to maintain equilibrium and establish a new equilibrium constant. This reaction is exothermic and therefore reducing the overall temperature of the reaction will cause the reaction to want resist the heat lost by producing more energy and shifting toward the product side. In the case of the Haber Process, this proves to be economically unfeasible and a temperature balance as well as a catalyst (which does not affect the position of the Equilibrium) does reduce the overall activation energy to make this reaction profitable. By removing the NH3 from the system and recycling the N2 and H2 manufacturers can yield higher quantities of NH3 without resorting to extremely low or high temperatures. 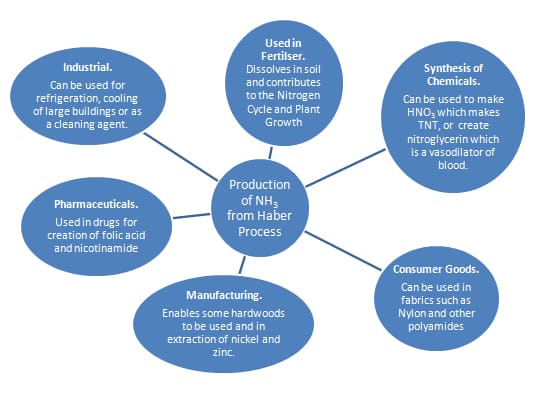 The production of NH3 is an exothermic reaction; therefore according to the Le Chatelier’s Principle, by reducing the temperature, the equilibrium will resist this and shift to the right and produce more NH3 and heat. However by decreasing the overall temperature, it severely reducing the rate of reaction because particles have less thermal energy and effective collision take much long to occur. Though it may yield higher % of ammonia it will take much longer to transpire, which is not profitable and therefore is not an economically sound plan for manufacturers.

The role of iron oxide in the Haber process is to be a catalyst and eliminate the need for excessively high temperatures, allowing the reaction to occur effectively at lower temperatures with lower activation energy.

Common explosives that can be made with nitric acid are Nitroglycerin (Dynamite) and Trinitrotoluene (TNT), Nitrocellulose (Guncotton), and Semtex (Nitro Plastic Explosive).

Nitroglycerin in its pure form is extremely unstable and can cause a contact explosive, meaning physical shock can cause it to explode; this makes it highly dangerous to transport or use.

Gun cotton or Nitrocellulose is highly flammable compound which is formed through several steps. First a nitro group is introduced into the organic chemical compound, Cellulose and the Cellulose is then nitrated again with nitric acid. The resulting compound, Nitrocellulose is used as a propellant or low-order explosive; often used to quickly ignite other flammable sources.

Nitrogen is naturally fixed by bacteria through a process known as Nitrogen fixation. Cyanobacteria (Azotobacter, Beijerinckia, and Clostridium) symbiotic bacteria (Rhizobium) in the soil perform the following reaction through the use of an enzyme complex known as nitrogenase.

The inert gas Nitrogen (found as nitric oxide) is converted into ammonia, nitrates, or nitrites. These nitrate ions can be absorbed by plants and can be used in the synthesis of proteins, chlorophyll and nucleic acids.

Thanks, this helped with my coursework!