Hemp, also known as Cannabis sativa, marijuana, grass, and by many other names, has not been a legal commercial crop in the United States for almost sixty years.  As common two centuries ago as cotton is today, hemp is not seen on the market.  As many groups fight for hemp to become legalized as a drug, many people are battling for the plant to become legalized for its industrial and medical uses.  From Disney Indiana Jones hats to fuel for our automobiles, hemp is a hardworking, environmentally sound renewable resource.  People have become so wrapped up in the “drug” aspect of marijuana that many are forgetting its uses as an industrial material.

Hemp is an ancient drug, first mentioned in a Chinese manuscript in 2700 BC.  Its uses included treating gout, malaria, gas pains, and absent-

mindedness.  Hemp was an integral part of early Indo-European religious ceremonies for thousands of years.  Records from Assyria in 650 BC referred to it as a drug called azulla that was used for making rope and cloth, and which was also used for experiencing euphoria. Hempen sails brought the Spanish, Dutch, and British conquerors to the new world (Charpentier 18).  In North America, hemp was planted near Jamestown in 1611 for use in making rope. In order to keep a constant supply of hemp available, a law was passed in Massachusetts in 1639, requiring every household to plant hemp seed.  In Maryland, Virginia, and Pennsylvania, hemp was even used as a monetary unit. Thomas Jefferson’s draft of the Declaration of Independence, released by the Continental Congress on July 4, 1776, was written on paper made from hemp (Whole Earth Review 46).   And the 49ers washed gold from California creeks in Levi’s made from hemp.  In 1937, the United States government passed the Marijuana Tax Act which prohibited the use of marijuana as an intoxicant and regulated its use as a medicine.

Although there are hundreds of ingredients in marijuana, the main ingredient is a chemical called tetrahydrocannabinol (THC).  THC affects the brain and the circulatory system, especially the heart.  This makes the heart beat faster and causes small blood vessels to expand.  This is the most visible in the eyes, where tiny capillaries swell and fill with blood, giving the eyes a bloodshot look (Ravage 6).

Marijuana had its day of glory in the 1960s.  Casual use was widespread, mainly among college students, who saw it as a way to protest against the political and social “establishment.”  The use of marijuana declined in the decades following the ’60s, but there is evidence that it is making a huge comeback-and with a dangerous difference.  Its use among teenagers is increasing.

For thousands of years, hemp’s fibers have been used to make many different kinds of fabric including clothing and rope.  Lately even big companies like Ralph Lauren, Calvin Klein, and Disney have been testing the waters and offering some hempen products to the market.  Not 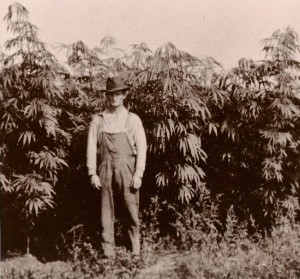 only can hemp fibers be used to make fabric,  a 1938 Popular Mechanics article states that hemp can be used to manufacture over 25,000 products-ranging from cellophane to dynamite-and a 1916 U.S. Department of Agriculture bulletin calculated that over twenty years, one acre of hemp would yield as much pulp for paper as 4.1 acres of trees.  There have been no more-recent studies to either confirm or discredit theses reports (Barry 22).

Contrary to the belief of many people, the supply of wood for papermaking is not inexhaustible.  As early as 1916, the federal government understood that the trees were running out; Bulletin 404 recommended the cultivation of hemp as an alternative source of fiber for papermaking.  The USDA figured out that the supply of trees could barely last a century.

Marijuana has also been found to be valuable in its medicinal uses.  Beginning in the 1980s, renewed interest in the therapeutic qualities of marijuana prompted many medical researchers to study the possible effects of its use as an antibiotic.  The only authorized medical use of marijuana by the Food and Drug Administration arises in the case of chemotherapy.  The THC seems to help patients who experience extreme nausea and vomiting that occur with chemotherapy.  Although its far from being a final cure, marijuana helps relieve pressure caused by the eye disease, glaucoma.  Research also indicates that short-term smoking of marijuana has improved breathing in asthma patients.  Muscle spasms are relieved when patients with muscle disorders take marijuana.  In England, it has been used as an anti-depressant, and in South Africa, women smoke marijuana to ease the pain of child birth.

Not only are people beginning to see hemp for its industrial and medical use, they are seeing it as a way to possibly help reduce their taxes. A study was done in 1992 concerning the potential tax revenues resulting from the speculated legalization of marijuana.  Michael R. Caputo, associate professor of agriculture at the University of California, calculates that in 1991, at the Drug Enforcement Agency’s estimated figures of $120.94 per ounce, the total retail value of the marijuana would have been between $5.09 and $9.09 billion, had the marijuana trade been legalized and federally taxed.