A hurricane is defined as an intense rotated oceanic weather system, which has speeds faster than 74 miles per hour. Hurricanes form over tropical regions of the ocean during the late summer and early fall. In order for a hurricane to 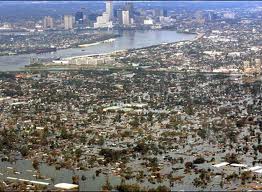 from the water must be warmer than usual, with a temperature of 27 C. In a hurricane the air spirals in a counterclockwise fashion. Hurricanes become weaker, and smaller as they venture onto land or rise upward. The average hurricane has a size of 500 km, or 300 miles in diameter.

Hurricane Katrina took place in several locations in the Gulf of Mexico and the Atlantic Ocean. The hurricane started off in the Bahamas on August 23, 2005, as a Category 1 hurricane with 95 mile per hour winds, and maneuvered its way upward towards the Southern Florida coast, where it touched down on August 25th, 2005. The storm weakened and then made more landfalls in Florida as a Category 3 storm. It then moved into the Gulf of Mexico, where it intensified so heavily that it had become a major Category 5 storm. The hurricane now had winds at top speeds of 170 miles per hour. The hurricane headed straight towards the gulf coast, with the eye of the hurricane headed straight for New Orleans, a major urban center. The hurricane made landfall on August 29th, with the eye of the hurricane missing New Orleans slightly. The hurricane caused horrible flooding to the gulf coast especially, New Orleans, where 80% of the city was underwater afterwards.

Hurricane Katrina had several social impacts on the people of the Gulf Coast, specifically those living in New Orleans. The US government was criticized heavily for their response towards hurricane Katrina. Response after the hurricane was considerably slower than usual, and many believe it is because those who needed help in New Orleans were predominantly poor, African American citizens. These low-income citizens were unable to afford plane or bus tickets out of the city, so they were trapped in New Orleans with little food and water. Many of these residents were also unaware of the sheer strength of Hurricane Katrina. Another major issue after Katrina was that those who had evacuated or been evacuated were unable to return to the city for a long time. The population of New Orleans, pre-hurricane Katrina was 484 674. 3 months afterwards the population had been completely decimated, and was now at 90 000. Many of the people who had left had gone to Texas, while others had gone to other southern or Midwestern states nearby. The population of New Orleans has improved recently and it is now at 223 388, which is still much smaller than the pre-Katrina population.

There were many major environmental impacts after hurricane Katrina. There was very little drinking water in New Orleans after the hurricane due to the severe pollution caused by two major factors. The first was that many tons of oil had spilled as a result of the hurricane. This oil mixed in with the flooded waters, which some people were drinking because they were so thirsty. This was obviously terrible due to the high contamination of the water. Household hazardous wastes, and other materials used to make houses that were destroyed were swept into the water. Dead bodies floating around in the water also contributed to the pollution of the area.

Help Us Fix his Smile with Your Old Essays, It Takes Seconds!

SPREAD THE LOVE!
Go to Top
Please help us feed and educate children with your old homework! It takes seconds! Upload your Essay or Report
+
wpDiscuz