Archaeology involves controlled methods of survey and excavation, aimed at recovering objects and remains which provide information about the structures and activities of people in the past. The relationships of these objects and remains can be reconstructed, and aspects of their cultural meaning determined. Since so much of the material which survives the passage of time consists of tools, weapons, and other implements, archaeologists attach great importance to the technologies of vanished peoples.

Archaeologists use various terms to describe their finds. Items which were deliberately fashioned to serve some 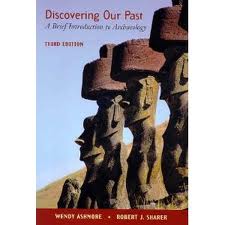 purpose, such as tools and ornaments, are called “artifacts”, and the whole collection of artifacts from any given site is called an “assemblage”. Structures, including remains of dwellings, and food processing and cooking areas, are called “features”. The term, “samples”, refers to controlled collections of bones, seeds, shells, soils, and wood ash.

There are many different kinds of sites – habitation sites, animal kill sites, stone quarry sites and burial ground sites – each requiring particular methods of excavation. In general, however, to record the relationships between artifacts, features and samples, archaeologists first map and grid a site, establishing squares of uniform dimensions.

Then they excavate the deposits within these squares and record the position of what they find in terms of its distance and depth from one or more fixed reference points. The interpretation of the evidence makes it possible to reconstruct a sequence of events over a period of time and build a model of the site.

Stratigraphy is a basic concept of archaeology. Simply, this means that the oldest remains at a site are found at the deepest levels, with the more recent in progressive layers one on top of the other, up to the present-day surface of the ground. Stratification at different sites can vary greatly, further complicating the archaeologist’s work.

At some sites, natural layering may be lacking, and the deposits may continue down through many feet of the same type of soil. At others, the stratification may be disturbed, either by natural events or by the activities of men. However, whether the archaeologist excavates by following natural stratification or by arbitrary units, the artifacts age can usually be determined, relative to others at the site, by noting the level from which it came.

The process of dating, especially, depends on pin-pointing the exact spot where an artifact or other bit of evidence is found. The task of establishing a cultural sequence for a given site depends primarily on relative dating, which merely indicates that one find is older or younger than another. Dates which are keyed to our modern calendar are termed absolute. Methods of dating by the analysis of the physical and/or chemical properties of certain remains, as well as by various other techniques, have been refined over recent decades, and have made both relative and absolute dating somewhat easier. Nevertheless, dating poses many difficult problems for the archaeologist.