“Six Years in Hell: A Returned Vietnam Pow Views Captivity, Country, and the Future”, is a book written by one Lt. Colonel Jay R. Jensen in a first person manor.  He was a military pilot who flew over Vietnam and was captured and taken as a POW.  This book covers his time in the military beforehand describing the daily procedures etc. of his military life.

The author graduated from Jordan High School in Sandy, Utah in 1949.  He then  joined The Utah Air National Guard during the Korean war. 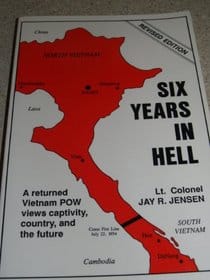 The book is written from the perspective of the author at the time he experienced it.  The descriptions are so well written that one can almost see or relate to what is being described, but as time progresses you can tell the author’s moods change as the mode of descriptions differs.  The point of this book was obviously to show the reader a day-by-day look at the life of a military citizen while serving, during capture, and at the end of captivity.  Through his accurate descriptions the author conquers this point quite well.  The descriptions of the people are so well written that the reader actually “gets to know” that person.  Although physical features are scarcely covered just by the details given of the type and speech of a person one can easily relate that person to somebody they know which makes the reading much smoother as the story progresses. Lt. Colonel Jensen was stationed for attack in Vietnam and as the superstition goes the 13th mission was to be his unlucky one.  As they suited up and took off on their 13th mission the only thoughts in their minds were reaching their 100th mission so that they could leave and go home.

READ:
Around the World In Eighty Days: Summary

During his flight he was hit by an SAM (Surface to Air Missile) and taken down only a short distance from the coastline.  He was immediately captured by some locals and beaten and battered.  After his immediate reception, he was taken by some people he describes as, “Quasi-Military Men” and put in a hut.  He was often tortured and after a refusal to say anything more than his Name, Rank, and Serial Number he tortured again and when it became apparent that he was not going to say any more they took him on a long journey to Hanoi where he would stay at the “Hanoi Hilton” which was an old French prison.  The “V” (Viet Cong)  referred to it as Hoa Loa meaning “Hell Hole.”  He was later moved from Hoa Loa and into a place called the ZOO, a more comfortable and welcoming camp than the last, and was taken through many more moves after that. The rest of the story is told describing his tribulations at the “Hanoi Hilton”  and is summed up at the end of the book talking about his return home and his hopes for the future including finding a new wife because his current wife had divorced him after his 5th year of captivity.

This book had no index but the table of contents was very thorough and one while having the ability to read straight through, could also use the book as a reference looking at the table of contents that pointed to each chapter and sub-chapter which were descriptively named.  So for instance in you wished to know about the different forms of torture you could look under chapters three and four.

The author is a very religious man, he was quite devout before the capture but afterwards he was more so.  One can see why quite easily.  When in solitary confinement what more does one have than faith?  Well the author became quite faithful during this time and that brought him through.  Once and often he thought about superstition.  Here is an excerpt from early in his captivity recalling how the number thirteen had affected his life.

2. I had completed 13 years of active duty in the Air Force

5. Thirteen days later I went TDY (temporary duty) to Nellis AFB, Nevada, to check out in the F-105F

9. I left the states on January 4 and arrived at Korat AFB, Thailand, 13 days later

11. I was assigned to the 13th Fighter Squadron

12. This Squadron was part of the 13th Air Force, our head-quarters

Now whether this is all coincidence or not this is another of the parts of the book that makes you really look at life and think. The author’s style of presentation is one that will make the reader think about the story being told, but also think about their own life and how it relates to the story the author is telling.