Jesse Owens, one of the eight children in his family, one of the best track and field athletes of all time. He was born 1913, on a farm in the city 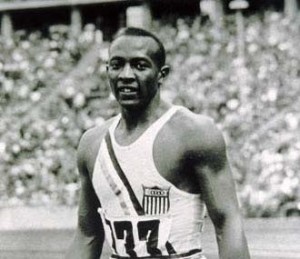 of Danville Alabama, under his real name, James Cleveland Owens. He went to Fairmount Junior High School. Then he went on to high school where he was a track athlete and there his high points were the running broad jump (long jump), the one-hundred meter dash and the two-hundred meter dash. After graduating from high school he attended Ohio State University (OSU).  Charles Riley taught him after he first saw him in junior high. He was an excellent track runner in high school, one of the best in the world. Like mentioned above, he was excellent in the broad jump, the one-hundred meter dash, and the two-hundred meter dash. He loved running when he was young; he said “…it would always get me where I was going…” He would always run. He then went on to attend Ohio State University and there he set the new worlds record for the broad jump at the length of 26 feet and one forth inch.

Going on to the next year he set another worlds record for the one-hundred meter dash at the time of 10.2 seconds. He then was so good he went on to the 1936 Olympics as a member of the U S Olympic team, the games were held in Berlin, Germany where blacks were not accepted as well as whites and because of that Reichfuekrer Adolf Hitler did not acknowledge the achievements that he did perform, despite his athletic

ability. He won four Olympic gold medals in the 200 and 100 meter dash, the broad jump, and also the 400 meter relay with the other four people that ran with him. He was one of the four Americans who have one three or more gold medals in one of the games. The Chicago Defender wrote an article which came from Berlin which reads: “Jesse Owens is the god of the sports fans here. He has effectively demonstrated his superiority in winning the finals in the  100 meter event which he equaled the world’s record and by blasting the Olympic mark of Eddie Tollan, another race star, set back in 1932 over the 200-meter route. He was the first Negro to hold such position on any Olympic team at this time. Jesse Owens was proud of his race and wasn’t afraid to show it to anyone.

He ran for his race in all the Olympic games he attended. He gave hope to all the blacks when he did what he did and they had more reason to be treated like the whites in the world. A lot of African Americans look up to him as a black man for all he did for the black race. He showed the world that the blacks are the same as everyone else and that we all have the same blood. Jesse Owens went on after his career and attended many foundations and programs to show that he cares for who he is. He eventually died at the age of 77 in 1980 and he  finished off with many awards from his track seasons. He will be looked up to and respected by all and will never be forgotten.