Born on Jan 15 1918 in Bacos, Alexandria, Gamal Abdul Nasser came from modest beginnings, having been the son of a postman. In 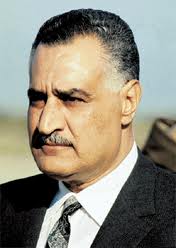 Alexandria, he acquired enough education to gain admission to the Egyptian Military Academy and graduated as an officer by 1938. Having fought in the first Arab-Israeli War in 1948 he witnessed the defeat of the Arabs at the hands of an incompetent government.  As a result, he led the coup that overthrew the King in 1952 and in three years he had risen from an obscure army officer to become Egpyt’s Prime Minister. As Prime Minister, his commitment to nationalism was expressed in two ways: through achieving true Egyptian national independence and through the promotion of national liberation movements throughout the Arab nations and the Third World.

–  “We [the army] have been the ghost used by the king to give people nightmares, but now it’s time for the ghost to turn into a tyrant and tyrannize his sleep.” – Nasser to his comrades before the coup.

– An Indian journalist asked Nasser during the first year of the “revolution” about his ideological leanings: “Are you a leftist or a rightist?” Nasser laughed deeply and responded, “I’m a conspirator.”

– “I will give democracy to Egypt after 30 years”

– Nasser once stated that he was “leader of the Arabs and without me you are nothing. Either take what I have to offer you or leave and never return”

Nasser outlined his fundamental goals in what he called the ‘six principles of the revolution’: an end to imperialist control, an end to 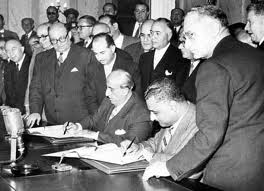 feudalism, the end of capitalist monopoly, strengthening of the national defense, greater social justice, and a return to parliamentary rule. Nasser intended that Egypt, under military transitional authoritarian rule, should fulfil these principles in order to foster the “political” and “social” revolutions discussed by Nasser in his treatise The Philosophy of the Revolution, which appeared in 1953.

Due to Nasser’s popularity, Egypt’s Arab character was then glorified in the January 1956 constitution, which asserted that the Egyptian people “consciously perceives of its existence as a part of the great Arab whole, and correctly acknowledges its responsibility and duty within the common Arab struggle for the victory and glory of the Arab nation.” Nasser actively endorsed the ideals of Arab nationalism and Arab unity from the mid-1950s onward. By lending his prestige and the efforts of his regime to the realization of such ideals, he elevated them to a position of ideological prominence in the Arab world. He inspired (and covertly assisted in) the creation of Arab nationalist and Nasserite parties in the region, he planted the seeds for political unions like the United Arab Republic (UAR), formed by Egypt and Syria in 1958. The possibility of the formation of a grand Arab nation was evident: when Nasser made a triumphal visit to Damascus in February 1958, members of the jubilant crowd picked him up and carried him on their shoulders. (What made this unique was that Nasser was still seated in the parade car!)

The Arab-Israeli Conflict of 1948

have we forgotten Mohamed Nagib the leader of the revolution and not Nasser.
Lets give credit where credit is due.