Early in the morning of August 22,1831, a band of black slaves, led by a lay preacher named Nat Turner, entered the Travis house in Southampton County, Virginia and killed five members of the Travis family. This was the beginning of a slave uprising that was to become known as Nat Turner’s rebellion. Over a thirty-six hour period, this band of slaves grew sixty or seventy in number and slew fifty-eight white persons in and around Jerusalem, Virginia (seventy miles east of Richmond) before the local community could act to stop them.

This rebellion raised southern fears of a general slave uprising and had a profound influence on the attitude of Southerners towards slavery.

Nat Turner was born a slave in Virginia in 1800, owned by a southern man, named Ben Turner. It was common during this time for the slave to be given the last name of their owner. In this relatively easygoing atmosphere at this particular plantation, Nat was allowed to learn to read and write. growing up, Nat played with his owners’ son until the age of twelve. He was then put to work as a field hand. He believed that that God had chosen him to lead the blacks to freedom. After seeing a halo around the sun on August 13, 1831, Turner believed this to be a sign from god to begin the revolt. Beginning on August 22 and lasting for two days, Turner and seventy recruits went on a rampage.

They killed Turner’s master and fifty-eight more men, women and children. Many blacks did not join him because they feared the futility of his effort. The revolt was crushed within two days and Nat Turner managed to escape. The first report of the Turner revolt was sent in form of a letter from the Postmaster of Jerusalem to the Governor of Virginia. This letter was sent by way of Petersburg and was first published in the Richmond Constitutional Whig of August 23,1831. This group of 40 blacks, led by Nat Turner, terrorized the white population of Southampton County, Virginia and killed 60 whites before the Virginia Militia and local residents killed or 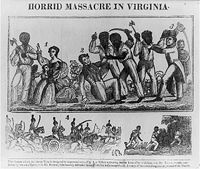 captured the insurgents. Even though the rebellion was over on August 23, the leader of the blacks, Nat Turner escaped capture by the militia. On August 24, militia units from the surrounding counties descended on Jerusalem, Virginia and a massacre of blacks in Southampton began.

Much of this torture and killing of blacks was done by outrageous groups of white men, bent on revenge. Hundreds of blacks were killed, most of whom were totally innocent of any involvement on total clue of Turner’s rebellion. On October 31, Benjamin Phipps, a local farmer, spotted Nat Turner at gun point hiding behind a bush. Tuner was then later placed in jail where he confessed. On November 5, Turner was convicted if insurrection and sentenced to hang and on November 11 the sentence was carried out. His corpse was used for scientific study. Nat Tuner’s Rebellion was significant in pointing out to Northerners that slavery was a problem. The Northerners then fought for thirty years to end the “peculiar institution” in America.