January 23, 2000 marked the twenty-seventh anniversary of the Roe v. Wade case. It all started out in a small town in Texas where a woman under the alias Jane Roe filed a case in district court for a woman’s right to choose abortion. At this time law in Texas prohibited abortion. Eventually the case moved to Supreme Court. The attorneys for Roe argued that the law was unfair and unjust.

They said that the unborn fetus is not a real person. They pointed out that a woman should have the right to control their own life 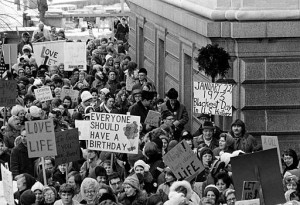 and body. They said it was a right of privacy and if women fell that it’s the right choice to abort a baby they should be allowed to make it. They also said that women should be able to abort a baby if the birth of the baby would endanger the life of the mother or the baby; they should have a right to abort it. They also argued that women have fundamental right to abortion. The case, which was filed in District Court, was filed against Dallas District attorney Wade. Wade strongly opposed abortion he believed abortion was murder. Wade made the point that Fetus is human being and has right to life under the law.

He also argues that the fetus is life upon conception. He said that abortion hurts women not only physically but psychologically. Abortion can result pain, discomfort, and unstable metal conditions. According to the fourteenth amendment a person has an undeniable right to freedom. They stated that the fetus has a right to freedom guaranteed by this amendment. After hearing both sides of this case the Supreme Court ruled in favor of Jane Roe. They stated that women have a fundamental right to abortion. They also stated that the fetus wasn’t a life until the first trimester of pregnancy. Due to this case and the ruling of it all states have legalized abortion. This case has greatly influenced the world today. The changed of the world due to this case are numerous.

This topic is very much argued. Some people take the side of Jane roe and yet other believed in the side of Wade. This topic is also argued in different religions. The Catholic Church believes that abortion is murder and no person born or unborn should be unwillingly killed. Murder is against the Ten Commandments and a serious crime. They believe that abortion is wrong and just as bad as murder. Many Catholics protest abortion by holding protests outside of abortion clinics. Many events in world history are related to this case such as abortion clinic bombings.

Abortion is worse than murder because the unborn baby never did anything wrong.
Murder victims don’t deserve to die either, but they aren’t innocent like babies.