Hydrologic Cycle: 97% of Earth’s water is stored in the oceans, evaporated then precipitated on land – some soaks in (infiltration), some flows over the land as streams (runoff), some evaporates back into the atmosphere and is transpired by plants, and some is stored in glaciers, but most returns to the oceans by streams

Stream Flow: stream erodes, transports according to its velocity and channel shape 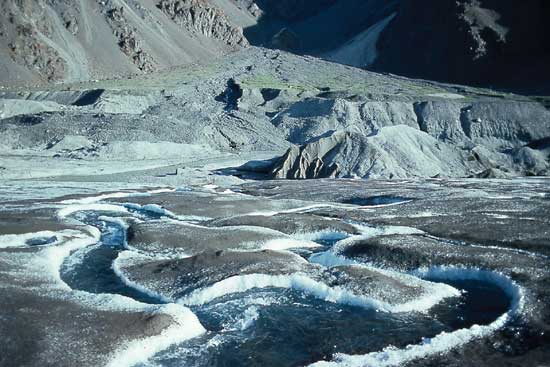 Gradient – slope of stream channel over its length; cross-sectional shape determines how much of the channel contacts water, slowing it down; rougher, more friction

Discharge – volume of water flowing through the stream’s cross-section per second; if discharge increases, stream usually gets wider, deeper, and faster downstream

Work of Steams: they erode, transport, and deposit simultaneously over their lengths

Transport– 3 types of sediment load: dissolved means ions in solution from chemical weathering and groundwater; suspended is sediment that remains above the bed; bed load is particles sliding and rolling along the channel floor; saltation involves jumping and skipping of particles that alternate between bed and suspended loads

Deposition – occurs when stream can no longer carry its load and particles fall to the bed; can form a channel deposit of sand and gravel in bars, or floodplain deposit of mud beyond the channel

Stream Valleys: a stream cuts vertically but its banks cave in by mass wasting to develop narrow V-shaped valleys with waterfalls and rapids in rough channels

Wide valleys form on gentle gradients and cut mainly sideways forming floodplains as the stream shifts back and forth across the valley leaving a thick fill of sediment; meanders are bends on floodplains where a stream erodes the outsides of bends at cut banks, deposits on the insides at point bars; the stream may cut across narrow meander necks at cutoffs, leaving oxbow lakes; natural levees of sand form on stream banks, and back swamps of mud beyond banks; a delta forms where a stream enters standing water at its mouth (splits into distributaries)

Drainage Networks: determined by the network of tributaries feeding the stream; pattern of a basin depends on rock types and structures: dendritic occurs in uniform bedrock where channels follow local slopes; radial from a volcano or rock dome; rectangular where stream flows over joints or a fault system with right angle bends

Floods and Flood Control: artificial levees of earth are built along stream banks to increase the volume the stream can hold, while flood control dams are built to store water then let it out slowly – resulting reservoirs are used for irrigation, power generation, and recreation but they flood river valleys, displace wildlife, drown forests, and fill with sediment that reduces their holding capacity and effectiveness