On the morning 12 past 5:00 San Francisco  suffered a major earthquake that killed 3000 people, the earthquake lasted for about 40 seconds and was recorded at 8.3 on the Richter Scale.

People ran from there houses and some stayed inside the buildings and were crushed.  The people who ran in the streets were killed 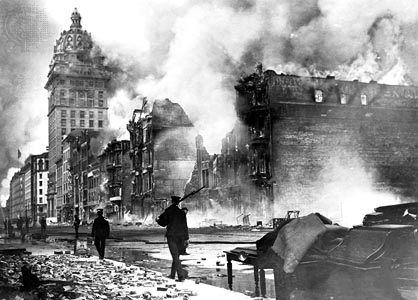 by toppled buildings falling from above.  There fire department was efficient but the water pipes that go down the San Andreas Fault were severed.  The fire could not be stopped because there were now water until the next couple of days.  Gas mains blew and caused massive fires all around the city.  The city was in the middle of a great economic boom and almost all was lost on that day.  The old buildings were never made to withstand earthquakes and easily crumbled and fell crushed people.  Some sailers on the coast tried to leave but the waves flew the boats around like toys.  The buildings were made out of unreined forced brick or wood which couldn’t withstand a earthquake of that magnitude.

After the earthquake, they noticed that the San Andreas Fault shifted a 250-mile long section witch tore roads and fences.  Rivers, roads and power lines were severed and not aligned with its surroundings.  A road across the fault ended up 21 feet north of the road to the east same with the rivers and creeks.

The earthquake’s most damage were in Los Bonas 30km east of the fault yet there was little damage along towns to the east side of San Francisco Bay such as Berkely, 25km east of the fault.  And the capital of California Sacramento that was 120km east of the rupture showed no damage. Scientists found out that the earthquake originated north of Oregon and south to Los Angeles a total of 1170 Km.

Knowing now that buildings could not withstand a earthquake with unreiforced brick, the new San Francisco would have buildings that can handle major earthquakes by constructing them so that they sway back and fourth rather than just simply crumbling to the ground killing people.

The San Andreas fault is formed by the Pacific plate sliding north and the North American plate running South.  The two slide together caused the earthquake. The most recent earthquake in that area today, was in 1990 in San Francisco which measured around 8.3 on the richter scale but it wasn’t a bad as the one in 1906.