“The artist’s vision is more important than tradition.” Francisco de Goya, a Spanish artist, believed that the most important thing was to draw what he saw rather than following the traditional style. Unlike any other artists of his time, Goya did not tend to imitate Renaissance arts targeting classical subject matters. Instead, he tried to bring the real people and the society that he observed up to the canvas. Francisco de Goya’s early life and personal experiences are reflected in his exceptional paintings, such as The Third of May, which has had a lasting effect on the artists that followed.

During his childhood and adolescence, Goya met talented artists who developed his early style and had a great influence on his career and works of art. He was born in the Aragonese town of Fuendetodos located in northern Spain on March 30, 1746. His father, Jose was a glider master and his mother, Gracia Lucientes, was from a hidalgo family (Weems 1). He grew up in Zaragoza where he attended a religious school, Escuelas Pias, which provided education for the poor of Spain. During his school year, he met his lifelong friend, Martin Zapater, who later exchanged letters with Goya for over twenty-five years (Wagner). Friendship and country were very important to Goya and his career, and it is reflected on his portraits and other works of his family and friends. When Goya was fourteen, he actually began his formal education of art 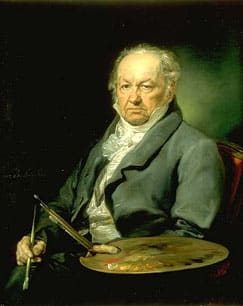 working at the studio of Jose Luzan. Goya himself wrote an autobiography about his four-year training under Luzan:

He was a pupil of Don Jose Luzan in Zaragoza, with whom he learned the principals of drawing and who made him copy the finest engraving that he possessed; he stayed with him for four years and his painting continued to be influenced by him until he went to Rome. (Weems 1)

After his training under Luzan, Goya went to Madrid to submit his works at the Academy of San Fernando as a young artist. He had a strong desire to be successful although he was only seventeen. His entries of art works were denied both in 1763 and 1766, however, he did not give up. Influenced by Baroque and Rococo style in Zaragoza and Madrid, he began his journey to Italy, the center of art during the time. While he was staying there for two years, his was brought into contact with Classicism and he won a prize for his skill at an open competition by the Academy of Parma. By June of 1771, he returned to Zaragoza and was offered to paint the basilica of Pilar in Zaragoza. He decorated the church with the fresco painting, Adoracion del Nombre de Dios in typical baroque style. Soon after his first commission, he became popular in Aragon and continued decorating churches and monasteries. The German artist, Anton Raphael Mengs who took the request of Bayeus summoned Goya to Madrid “to paint cartoons for tapestries for the Royal Factory of Santa Barbara” (Biography of Francisco de Goya). Mengs and Bayeu directed Goya on his career and he walked through “professional ascent to the ranks of academician, Adjunct Director of Painting at the Royal Academy, painter to the king, and court painter”. As a first court painter he painted the tapestry cartoons and popular scenes that were “regarded as realistic depictions of everyday life…shown to be intrinsic to interpretation of the artist’s subsequent works of caprice and invention” (Francisco Goya). He used many different styles while he was working at Court. For example, the Rococo was used in the tapestry cartoons dealing with joyful subjects while the Neo classicism was predominant in his religious and mythological paintings. He tried to use his own artistic sensibilities instead of following other artists’ new style. He got aquatinted with other masters such as Velazquez, Rembrandt and Nature who influenced his later art works. By his early experiences stated earlier, Goya became a sharp observer and practiced various styles. His artistic talent was evolved through his early experiences and brought out by reputable artists (Marco).

Goya’s experience of a serious illness and war during the invasion of French in Spain made a turning point in his life. After he worked as a court painter he had to go through a fateful sickness that made him entirely deaf. It brought a total change in his life as a painter and etcher. He started to see the extremely dark side of the world and drew the madness and imperfection of human. Pessimism or satiric mood entered his art works that reflected himself as the suffering individual. The Black Paintings is notable example of this:

The Black Paintings, scenes of witchcraft and other bizarre activities, are among the most outstanding works of the artist’s late years. Executed about 1820, these paintings are now in the Prado. Originally painted in fresco on the walls of Goya’s country house and now transferred to canvas, they attest to his progressively darkening mood, possibly aggravated by an oppressive political situation in Spain that forced him to leave for France in 1824. In Bordeaux he took up the then new art of lithography, producing a series of bullfight scenes, considered among the finest lithographs ever made. Although he returned to Madrid for a brief visit in 1826, he died in self-imposed exile in Bordeaux two years later, on April 16, 1828. (Sullivan)

Most of them are painted in dark colors expressing violence that distressed his mind. Following pessimistic point of view, he used “deformed and misshapen figures” to pull out sad and appalling mood. Expressionists and Surrealsits later appreciated these images (Goya 3). Besides the Black Paintings, his etching series called Los caprichos “mocked the social mores and superstitions of his time” (Evans) and another well known series, Disasters of War “presented more caustic commentaries on the ills and follies of humanity” (Sullivan). He combined fantasy and realism together in the Caprichos to produce “a savage, daring social critique” and dominated the series of The Disasters of War with “desolate realism” (Martins). Reflected on these notable art works, Goya was a successful Spanish artist but, at the same time, he was an individual who went through a deep exploration of human suffering. His paintings and drawings emerged as his “unique contribution to the critical ideas” grew through his own experiences (Stuart). 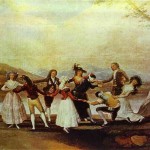 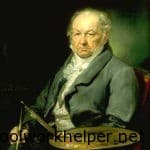 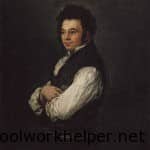 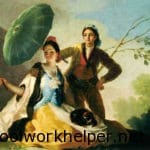 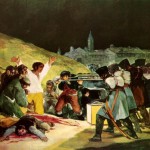 Among his famous paintings and etchings, The Third of May stands out for organized way of expressing the cruel scene of war through Goya’s visual realism. French soldiers led by Napoleon invaded Spain in 19th century and the war was a great anxiety for Goya. “He observed the battles between French soldiers and Spanish citizens during the bloody years of the Napoleonic occupation of Spain,” and recorded what he saw with the brush. For six years, Goya served as a court painter to the French creating paintings and etchings that were full of pain and sorrow. The Third of May, completed in 1808, described the terrifying scene of capitulated Spanish street fighters surrounded by aimed French soldiers (Sullivan).

It “commemorates a specific incident in which French soldiers executed a group of citizens of Madrid on the hill called Principe Pio,” emphasizing the “individuality of the prisoners” (Martins). In the painting, specific individuals were drawn in detail but joined altogether in the mood of brutality and corruption. While the faceless French soldiers are pointing their guns toward Spanish people simultaneously, one Spanish man is outstretching his hands over his head reminding “Christ like position” and the other man is wrapping his face with both hands. Another man who has already been fired is lying down on the ground in a pool of blood. Goya applied yellow and red highlights using a spoon. These colors are very noticeable on the background of dark colors. With a close look the rectangle can be drawn on the painting that is related to Picasso’s triangle in Acrobat and Velazquez’s circle in Water Seller. “The man in white is the focal point with all lines pointing to him” and the color of white attracts the attention as well as the yellow and red highlights. There is another explanation about this “Christ-like figure”, “The differences in both body position and expressed emotions of the characters infer that the man in the middle is of greater importance” (Jelinek et al). The man in the white shirt is to be good from its white color on the contrary of soldiers in dark colors and the red color of blood symbolizes death. Be fascinated by his realistic exhibition, this outstanding example of Goya’s genuine product delivers the suffering of human caused by violence and oppression. Until today, The Third of May left a great impact on countless number of artists and their way of seeing the world and allowed him to have the title of “Father of the Modern Art” who investigated realistic expressions (Stuart).

Pablo Picasso once said that Goya is the most successful artist in “poetically combining art with politics,” calling him a “painter philosopher” (Stuart). Influenced by brilliant artists from the early age, Francisco de Goya developed his personal style by evolving his keen observations and attempting different manners. His experience through fatal illness and war affairs changed his life and point of view. In conclusion, Goya’s early life and his experience during the hard time of battles and disease made it possible for him to create his great art works including The Third of May retaining his title as the Father of Modern Art. After his death, there was no instant followers of consequence, but his influence was “strongly felt in mid-19th-century painting and printmaking and in 20th-century art,” especially in the principal movements of Romanticism, Impressionism, Expressionism and Surrealism (Sullivan).