Stephen Edwin King is one of today’s most popular and best selling writers. King combines the elements of psychological thrillers, science fiction, the paranormal, and detective themes into his stories. In addition to these themes, King sticks to using great and vivid detail that is set in a realistic everyday place. Stephen King who is mainly known for his novels, has broadened his horizons to different types of writings such as movie scripts, nonfiction, autobiographies, children’s books, and short stories. While Stephen King might be best known for his novels The Stand and It, some of his best work that has been published are his short stories such as “The Body” and “Quitters Inc”. 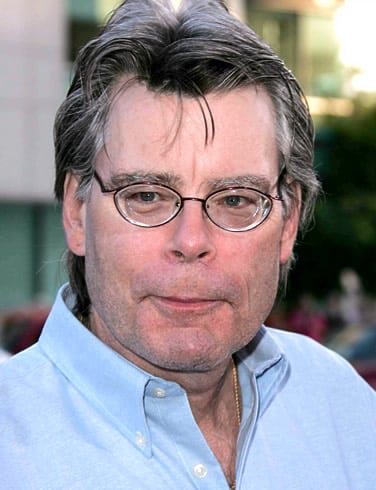 stories. Stephen Edwin King was born in Portland, Maine, on September 21, 1947, at the Maine General Hospital. Stephen, his mother Nellie, and his adopted brother David were left to fend for themselves when Stephen’s father Donald, a Merchant Marine captain, left one day, to go the store to buy a pack of cigarettes, and never returned. His father’s leaving had a big indirect impact on King’s life. In the autobiographical work Danse Macabre, Stephen King recalls how his family life was altered: “After my father took off, my mother, struggled, and then landed on her feet.” My brother and I didn’t see a great deal of her over the next nine years. She worked a succession of continuous low paying jobs.”

Stephen’s first outlooks on life were influenced by his older brother and what he figured out on his own. While young Stephen and his family moved around the North Eastern and Central United States. When he was seven years old, they moved to Stratford, Connecticut. Here is where King got his first exposure to horror. One evening he listened to the radio adaptation of Ray Bradbury’s story “Mars Is Heaven!” That night King recalls he “slept in the doorway, where the real and rational light of the bathroom bulb could shine on my face” (Beaham 16). Stephen King’s exposure to oral storytelling on the radio had a large impact on his later writings. King tells his stories in visual terms so that the reader would be able to “see” what was happening in their own mind, somewhat in the same fashion the way it was done on the radio (Beaham 17). King’s fascination with horror early on continued and was pushed along only a couple weeks after Bradbury’s story. One day little Stephen was looking through his mother’s books and came across one named “The Strange Case of Dr. Jekyll and Mr. Hyde.”

After his mother finished reading the book to him, Stephen was hooked. He immediately asked her to read it again. King recalls “that summer when I was seven, [my mother] must have read it to me half a dozen times”(Beaham 17). Ironically that same year, while Stephen was still seven years old, he went to go see his first horror movie, The Creature from the Black Lagoon. This is important because Stephen says, ” Since [the movie], I still see things cinematically. I write down everything I see. What I see, it seems like a movie to me”(Beaham 17). During this year the biggest event that probably had the biggest impact on Stephen King’s writing style was the discovery of the author H. P. Lovecraft. King would later write of Lovecraft, “He struck with the most force, and I still think, for all his shortcomings, he is the best writer of horror fiction that America has yet produced”(Beaham 22).

In many of Lovecraft’s writings he always used his present surroundings as the back drop of his stories. King has followed in his footsteps with the fictional town of Castle Rock, Maine. Castle Rock is a combination of several towns that King moved to and from with his family in his childhood. The main town that it resembles is that of Durham, Maine. It was after the exposure to H. P. Lovecraft’s stories that King first began to write.

While growing up and moving around the way his family did, Stephen had never been able to feel comfortable and settle down in one place and make friends they way other kids his age did (Underwood 77). Around the age of twelve the King family finally settled in the town of Durham, Maine. For Stephen King, Durham was the place where his imagination began to shine. It was at this time that Stephen first began to make friends. Along with his friends, Stephen would go the movies a lot. Stephen would use the movies as a inspiration. Although he enjoyed going out and having fun, whenever he would come home, Stephen would immediately write down his experiences and observations. Frequently King would place his friends and family into childhood fantasy tales. And one would always know how Stephen felt about them because of how long they lived in the story. It was not until college that Stephen King received any kind of real recognition for his writings. In the Fall of 1967, King finished his first novel, The Long Walk, and turned it into his sophomore American Literature professor for review. After a couple of weeks and a couple rounds around the department, the English professors were stunned. They realized that they had a real writer on their hands.

From then until he graduated with a bachelors degree in English from University of Maine at Orono in the Spring of 1970, King concentrated on rounding off the edges of his writing technique.  One short story that best shows the type and technique of Stephen King’s writing is “The Body.” “The Body”, which has been adapted into to a Hollywood movie, was first published in the collection of short stories called Different Seasons. The story is a tale of four twelve year old friends who at the end of one summer go out on a journey in into the woods to see a dead body. While on their journey they learn about life, friendship, and are propelled from innocent to experienced. On the surface of the story it appears to be simple journey with its occasional mishaps, but the true magnificence is that this story has a strong autobiographical coincidence. The main character, Gordie Lachance, is a boy growing up on his own through the memory of his dead older brother. Growing up, Gordie, an avid story teller, dreamed of becoming a writer. Before his brothers accidental death, all his parents would ever care about was his brother. Since his death, Gordie’s parents have presumably shut themselves away from Gordie. This, to a certain degree is true of King.

Because of his father leaving when Stephen was two, and his mother taking on around the clock jobs, he never really had any parental guidance.  The story itself is written with Gordie narrating in the present time look back at the journey. At the time of his flashback, Gordie is a bestselling author who has returned to his home town of Castle Rock to revisit his past. This is ironic because at the time Stephen wrote the story he himself had just moved from Bolder, Colorado, back “home” to the town of Bangor. King’s childhood home town of Durham is used in several different stories under the fictional town name of Castle Rock. It is also noticeable how in the story when Gordie “looks” back to him and his brother, his brother is the only person who cares for him. He noticeably goes out of his way to look out for Gordie, and is always encouraging his and asking him about his writing, while all his parents seem to do is ignore Gordie. This also can be related to King’s past because while growing up his brother while only two years older than him, always seemed to be there for Stephen and look out for him. Probably the deepest imagery of the story is at the end of the novel. Gordie is shown back at home and putting the finishing touches on his latest work.

While finishing up, Gordie is interrupted by his son who is shown in a sense to be a good-natured and caring boy. Gordie experiences a deep love for his family at the time. This setup is presumably placed in the story as an escape for King. In his autobiography Danse Macabre, King tells of his fear of providing for and caring for a family (Reino 112). This shows King pushing away the fear, in a sense saying that he is all right. That he has now embraced the idea. One of King’s best works is also one that does not fit in any category of his usual writings. For an author who usually writes horror, “Rita Hayworth and Shawshank Redemption”, is a story that is a refreshing sidestep. The story tells of how Andy Dufresne, who is falsely tried, convicted, and sentenced to back to back life sentences for the double murder of his wife and her lover, deals with being trapped within a dreadful situation that are out of his hands. Throughout the nineteen years that he is in Shawshank prison, Andy has to endure everything from a gang called the “Sisters”, who go around raping and beating their prey to being forced to create and run a money laundering scheme for the prison Warden. If this story was written without the authors name on it, there is none of Stephen King’s characteristic style, except for maybe in one place in the story. The one possible place that even hints that it is from the mind of King is at the end of the story where Red is off to keep his promise to Andy.

Andy asks Red, that when he get out of jail to travel to a southern Maine town called Buxton and look for something he buried in a “hay field under a large oak field.” The suspense of what was buried and the description of the field in Buxton is what is typical of Stephen King. While the story is very uncharacteristic of King it does deep down relate to himself. The theme of hope and of how Andy overcomes the situation is one that is tied closely to King. It runs a direct parallel with life as a child and how his life has turned out. Just as Andy was thrown into predicament and later escapes and lives his life on his own terms, Stephen, early on was forced to move from town to town with mother and brother. In the end Stephen escapes and now lives on his own terms. Stephen King’s works are so powerful because he uses his experiences and observations from his life and places them into his unique works. What seems to make Stephen King’s stories almost magical is that the settings of his stories are placed into common every day places.

Additionally, Stephen’s writings are true to life in peoples mind’s because he draws upon common fears. Just as King’s writing style and genre had been influenced by movies throughout his life, he is now influencing the same industry with his own vision and imagination. King’s writings are so widely appealing that over 42 of his works have been based upon or turned into Hollywood movies which have included stars like Jack Nicholson (The Shining), John Travolta (Carrie), and Morgan Freeman (The Shawshank Redemption).