Jerusalem is a sacred city within the teachings of the Roman Catholic Church, and its loss to the Muslims has been argued by many 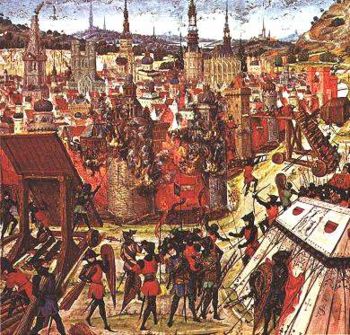 historians to be the reason for the initiation and perpetuation of the eight crusades, as Jerusalem is where the Crusades were primarily focussed[1].  However, it is easy to disagree with such a precept, when one observes the world situation at the time, along with the scant evidence available from that era.  At the end of the 11th century, the Roman Catholic Church held less power than it did at the beginning of that century[2].  The Great Schism of 1054 had occurred, separating the Eastern Orthodox Church from the Roman Catholic Church, moreover the Islamic Empire was rapidly expanding. The Muslims were pushing westward, across Africa, but more importantly; Muslims were starting to move northward, into Europe. In 1071, at the Battle of Manzikert, the Eastern Orthodox Byzantines were defeated.  This defeat was a major contribution to their loss of power and Asia Minor (modern day Turkey)[3].  In the midst of their fall, Alexios I of Byzantium, requested reinforcements, reinforcements that would eventually come in the form of the First Crusade.  The reason for these reinforcements is hotly debated though, as to the reasoning behind a separated Western Catholic Church assisting the enemy in the Eastern Orthodox Church.  Through the course of analysis, it will be proven that this First Crusade was initiated as a defensive measure to protect the Western Roman Catholic Church and its Power, and secondly, that this initial defensive measure evolved into a power struggle with the Muslims, a struggle between churches that exists to this day, but that was formally exacerbated with the last Crusade.

From the 7th Century, when Mohammad invaded Mecca, the religion of Islam has expanded by the sword, invading and conquering predominantly Christian lands.  The reason behind such actions is that medieval Muslim teachings describe two realms or “abodes”: the abode of Islam and the abode of war[4].  As non-Muslims do not lie in the abode of Islam, they are a people to fight, and convert, by the sword.  Christian states were resented by Muslims, they were symbols of power, power not held by Islam.  From the 7th century onward, this Muslim resentment of non-Muslim values led to their conquering of the Middle East.  Prior to Muslim aggression, the Middle East was the most populous Catholic area in the world, afterwards, as is true at the present day, it became predominantly Muslim.  The Byzantine Empire was reduced by two thirds from the existence of Islam to the latter part of the 11th Century, and even more expansion was looming.  The Catholic Church was forced to invade the Muslim world, to limit them in their power, to protect its own power[5].  In his speech at the Council of Clermont, as recorded by Fulcher of Chartres and translated into English, Pope Urban II stated

“Freshly quickened by the divine correction, you must apply the strength of your righteousness to another matter which concerns you as well as God. For your brethren who live in the east are in urgent need of your help, and you must hasten to give them the aid which has often been promised them. For, as the most of you have heard, the Turks and Arabs have attacked them and have conquered the territory of Romania as far west as the shore of the Mediterranean and the Hellespont, which is called the Arm of St. George. They have occupied more and more of the lands of those Christians, and have overcome them in seven battles. They have killed and captured many, and have destroyed the churches and devastated the empire. If you permit them to continue thus for awhile with impurity, the faithful of God will be much more widely attacked by them. On this account I, or rather the Lord, beseech you as Christ’s heralds to publish this everywhere and to persuade all people of whatever rank, foot-soldiers and knights, poor and rich, to carry aid promptly to those Christians and to destroy that vile race from the lands of our friends.”

From this, it is very evident that the intentions of initiating the First Crusade were to limit Muslim power, and to destroy the foreign values possessed by this aggressive nation.

READ:
Reasons for the Downfall of the Middle Ages 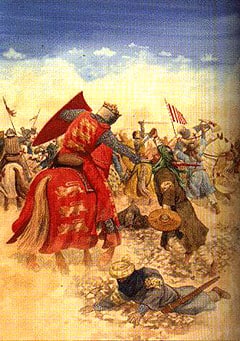 At the end of the first Crusade, Jerusalem was captured by the victorious Christians, and the Islamic nation was temporarily suppressed, causing many to view it as the most successful Crusade[6].  This lasted for nearly a hundred years, years where the Muslims were unable to withstand the strength of the dominant Catholics, the Catholics that held their precious holy land.  Within this period, the Muslims rebelled, leading to the second Crusade.  However, Jerusalem at this point was still held by the Catholics.  In their resurgence, between the second and third crusades, the Muslims, lead by the notorious Saladin recaptured Jerusalem in the Battle of Hattin, after nearly a hundred years under Christian rule.  This caused a distressed Pope Gregory VIII to issue “Audita Tremendi”, a papal bull essentially commencing the Third Crusade, a Crusade directed towards recapturing Jerusalem. “Audita Tremendi” begins, citing specific emphasis on the loss of Jerusalem “On hearing with what severe and terrible judgment the land of Jerusalem has been smitten by the divine hand…”, furthermore, it goes on to cite the sins of Latin Christendom as the reason for the loss of the territory, and demands that Latin Christians repent by winning back Jerusalem for Christianity.  This document began a short series of writs and councils, supporting the remaining Crusades in their journey to the holy land.  For example, the Fourth Council of Lateran, Cannon 5, proclaims Jerusalem to be under Papal rule, and rewards all Crusaders in reclaiming the city for the papacy.  The city of Jerusalem was regained again by the Christians through diplomacy in the Fifth Crusade, but only for a brief amount of time, after which, the Muslims decided they were unable to co-inhabit the city with Christians, which caused them to place the city under siege, and reassert their control.  Control, that would be further attacked by the Catholic Church in the few remaining Crusades, but never conquered.  As has been stated above, members of the papacy strongly advocated for the forceful acquisition of Jerusalem, the holy land, and eight times attempted such an action.  However, the Popes were unable to permanently maintain possession of the land, and in their realization of the impossibility of such a goal, ceased to try, focusing their time and energy in causes elsewhere, thereby disassociating the Church from the goal of recapturing Jerusalem[7].

At the present time, it has become impossible to deny the atrocities committed during the Crusades. There are documented cases of mass slaughter on route in northern Eygypt, where Crusaders pulled Muslims from their homes and hiding places and killed them in way words could only begin to describe.  There was extensive looting, looting to the point where people, lead by Richard I of England,   were decapitated in search of precious gems.  Cases of cannibalism have also been reported, by the likes of the scribe Guibert of Nogent in his book Historia Hierosolymitana.  Such acts did not do well to augment ties between the Muslims and Christians.  In fact, these acts seeded foundations of hate, that would evolve to where they are at the present day[8], with aggressive Muslim sects claiming a Jihad, on the predominantly Christian western world.

Lest not forget, that the Muslim world evolved out of the Catholic world, in fact, the Christians of Habasha, an area located in modern 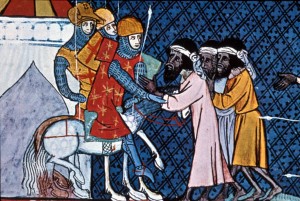 day Ethiopia, gave protection to early Muslims.  The two religions began on extremely good terms.  With the Crusades however, the relations between the two religions soured[9]. In acts of propaganda, European states portrayed Muslims as bloodthirsty savages, especially the Saracens, portrayals that evolved to their current state, where the western media shows Muslims to be a religion to be feared, according to Michael Frassetto in his book Western Views of Islam in Medieval and Early Modern Europe.  Further, colonialism in the Islamic world also lead to resentment, as western products such as cigarettes have created fatal addictions, and the western attitude towards democratic absolutism contradicts their values in Shariah Law. Frassetto further contends that colonialism was made possible by the familiarity of the land gained by the Christians.  In the present day, the religion of Islam is not on the best of terms with the Christian world, that is to say, it is not the same as it used to be in the infancy of Islam, though efforts are being made resolve differences between the two bodies such as The War on Terror assisting Sunni Muslims in Iraq, and bringing freedom to other Muslims in the formally totalitarian states[10].

Therefore, through analysis, it has been proven that the Crusades were predominantly a defensive measure, initiated by Pope Urban II at the request of Alexios I of Byzantium.  The first Crusade was successful in accomplishing its initial goal of stopping the Muslim offensive and capturing the holy city of Jerusalem.  However, the Muslim resurgence was successful in weakening the Christian forces, causing control of the city to fluctuate, instilling a strong desire by the papacy to maintain control, which led to later crusades designed to end the power struggle between churches.  A struggle, that with the Christian realization of a lack of monetary funds, the cause of the termination of the final two Crusades, formally ended.  Though the struggle formally ended, the effects are still being felt today, in the strong divide between the Christian and Muslim worlds, a divide that can trace its roots to the Crusade.  As a whole, the Crusades are a scar on the face of Christianity, by their way of nature call for resentment.  However, it is impossible to imagine a world without the Crusades, as the knowledge of the ancient Greek philosophers was rediscovered, and basic Muslim inventions discovered, like glass or the process of distillation[11]. These discoveries alone revolutionized the western development, speeding it along, and strongly contributing to modern day life.

thanks for this website i have lots of homework help even though i don’t need it because i am a geek at every subject
I AM….. EINSTEIN

Awesome write-up! Thanks for sharing your day.