The French and Indian War was fought on July 9, 1755. This battle took place at Fort Duquesne, in western Pennsylvania, which was one of the 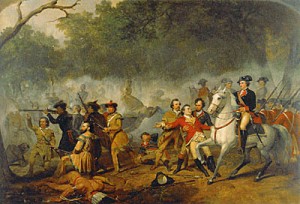 many French forts in the Ohio Valley. The fight was between the English army, which was led by General Edward Braddock and the French army, which was led by Captain Beaujeau. The English army included 1,750 British regulars and 450 colonial militia. The French army, which included Indians, included less than 1,000 men. The English army and General Edward Braddock marched through the wilderness towards the French fort, Fort Duquesne. The uniforms that the British wore were easy to see through the forest. They were red and very bright. Some soldiers carried flags, some just marched and carried their guns, some were on horses, and others played music to which the army marched. General Braddock and his British soldiers believed that the right way to fight a battle was to position themselves in an open area. The French and Indians hid behind trees and rocks which was smart because more British bullets hit trees than French and Indian soldiers when the two armies fought.  Ten miles from Fort Duquesne, Captain Beaujeau and his French army made a surprise attack on the English. Most of the British soldiers were killed and injured. While riding horses, General Braddock had four of them shot from under him before he himself was killed. When George Washington was 23 years old, he led the colonial militia on a retreat to safety. Two horses were shot from under him and four bullet holes were found in his coat, but Washington himself was not killed.