In late-1922 the German government was forced to ask the Allies for a moratorium on reparations payments; this was refused, and she then 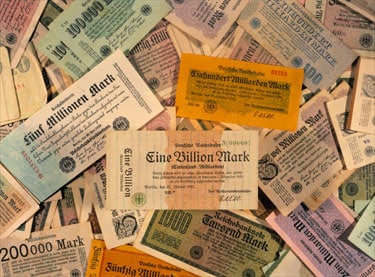 defaulted on shipments of both coal and timber to France. By January of the following year, French and Belgian troops had entered and occupied the Ruhr. The German people, perhaps for the first time since 1914, united behind their government, and passive resistance to the occupying troops was ordered. A government-funded strike began as thousands of workers marched out of their factories and steel works. The German economy, already under massive pressure, gave way. The huge cost of funding the strike in the Ruhr and the costs of imports to meet basic consumer needs were met by the familiar expedient of the printing presses. Note circulation increased rapidly, and by November 1923 had reached almost 92 trillion marks. With less than three per cent of government expenditure being met from income and with the cost of one dollar at four billion marks, Germany was in the throes of economic and social chaos. Starvation became a reality for millions of people, despite a bumper cereal harvest, as shops reverted to the barter system. Farmers refused to accept the effectively worthless, banknotes in exchange for grain, and food quickly began to run short in the cities. Prices rose one trillion-fold from their pre-war level. More importantly, for the long-term political future of Germany, the middle and working classes saw their savings wiped out.  These were, in essence, the people who were later to become the hard-core of the Nazi vote.  Economists will argue that runaway hyperinflation has two sources. Firstly, it arises through a fall in the foreign exchange value of a currency, when an adverse balance of payments reduces foreign investors demand for the currency. A falling exchange rate increases the cost of imports and, therefore, the cost of living. Wages rise as workers try to maintain their standard of living, especially if previous institutional arrangements have linked wages to living costs. Firms paying higher wages raise the price of the goods they sell, prices rise still further, the foreign exchange value of the currency falls still more, and the cycle continues.

Secondly, it arises through a large budget deficit which no one believes will narrow in the future. Faced with the prospect of budget deficits for 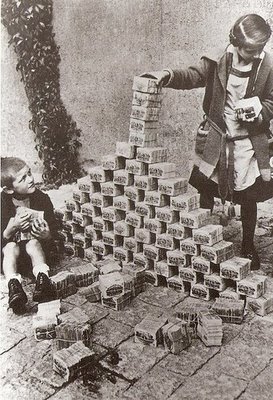 many years to come, the usual sources of credit available to the government decline to make further loans; the government can no longer borrow to cover the deficit between revenue and expenditure. The only alternative is to print more and more banknotes. As government workers and suppliers present their bills to the Treasury, it pays them off with newly-printed pieces of paper. This puts more banknotes into the hands of the public and they then spend them. In Germany, as we have seen, the problem was that there were trillions of marks worth of paper currency in circulation. Prices could rise one thousand times between a worker being paid and his reaching the shops. A common analogy used is that if one could afford a bottle of wine today, one should keep the empty bottle which would be worth more tomorrow than the full bottle was today.  Eventually, the power to boost government spending by printing money goes. When the governments can no longer gain, even in the short-term, a budgetary balance through inflation, the situation becomes so intense that stabilization through a currency board, a new finance minister or a link to the gold standard is implemented, and reform can be successful. It was at this point that some sanity was injected into the German economy by the election of Gustav Stresemann. He called a halt to resistance in the Ruhr, and set out to stabilize the mark. Luther, Stresemann’s Finance Minister, introduced the rentenmark the value of which was based on Germany’s staple, rye, rather than gold. In fact the rentenmark represented a mortgage on Germanys land and industry, which could never be redeemed. It did not matter.

The point was that the currency was stabilized and became exchangeable at a rate of one billion old marks to one new mark, and at the pre-war parity of 4.2 marks to the dollar. The new currency was quickly accepted by the population, and food and consumer goods began to appear in the shops. The government could now attempt to regain budgetary control in a climate of low inflation. The Dawes Plan was brokered, and a sum of some 39 billion dollars was lent to Germany of the following five years. However, this new economic prosperity had its basis in foreign investment, and thus the fate of Germany was now effectively held in the hands of Wall Street.   The consequences of the Great Inflation to Germany are many fold, and there is no doubt that politically, the first warning signs of a move away from fascism were seen. In the elections of May 1924, both the Nazi and Communist Parties made gains at the expense of the centre. The faith of the people in the Republic suffered a severe blow. As Shirer points out: What good were the standards and practices of such a society, which encouraged savings and investment and solemnly promised a safe return from them and then defaulted? Was this not a fraud on the people? And was not the democratic Republic, which had surrendered to the enemy and accepted the burden of reparations, to blame for the disaster.

Upper middle class savings in Germany were wiped out during the hyperinflation. Such savings had usually been invested in bonds and bank accounts, so the collapse of the real value of the mark carried with it the collapse of the value of the bonds. Debtors benefited substantially, for their debts were effectively wiped out. The relatively small, financially unsophisticated savers who made up Germany’s upper middle class had nothing left. This may have been the most important aspect of Germany’s early-1920s hyperinflation. People who are not rich but are comfortably off, pillars of their community, in middle-age, who have done well in life and saved enough to feel comfortable were the strongest supporters of relatively democratic, relatively liberal governments. Having learned the lessons of the Great Inflation, these were the people who remembered 1923 when the mark collapsed for the second time. These were the people who voted for the Nazi Party in their millions.   The causes, then, of the Great Inflation are not perhaps the reparations clauses of the Treaty of Versailles which are commonly blamed for Germany’s ills. German financial practices during the war undoubtedly sowed the seeds of the disaster which was to strike in 1921. The failure of her Republican governments to act, by implementing austerity measures, through a fear of their own weakness of position, led to the inflationary printing of more paper money. The reparations clauses were clearly side- stepped by the very same governments who pleaded they did not have the means to pay. This suited the government, and also Germany’s industrialists and landowners who profited immensely from inflation. Avoidance of reparations, in fact, became more important than the welfare of the German people. The Republic was built on weakness: the idea that the fledgling Republic had stabbed Germany in the back by surrendering was widespread, and therefore led to the perceived necessity of avoiding reparations. This policy was doomed to failure, particularly in the face of French belligerence. More short-sightedness was to blame for the passive resistance in the Ruhr. Whilst clearly wishing to prevent German production from falling into French hands, it is clear that the government could not afford to finance the resistance for long and, as we have seen, this was the proverbial straw which broke the camel’s back. There were, of course, external influences: the manipulation of the mark by foreign speculators was a side effect, as was Allied insistence on reparations.

These were, however, merely a side-show to the main event. The fault of the inflation rests firmly in the hands of the government. In terms of the consequences of the inflation, the signposts to the future were in place. It was clear that a relatively well-off middle and upper middle class had little or no interest in anything other than centrist democracy. The swing towards extremism in 1924 was an indicator of what was to come in 1930. This is demonstrated by the gains made by the Nazis and Communists in May 1924, but also reflected in their poor performances in the golden years’ of late-1924 to 1928. Following the second collapse of the mark in 1929, both these parties made huge gains at the expense of the centre. Voters do have memories, and those memories of two financial disasters in less than a decade were extremely strong. Finally, the fate of Germany, which since 1918 had been held in the hands of foreign governments, was essentially transferred into the hands of international financial institutions. The same people who structured the loans which helped to end the Great Inflation were the very same as those who speculated Germany – and, to be fair, the rest of the world – into the financial collapse of 1929. Germany, kept militarily weak by the allies, financially weak by her government and her industrialists was waiting in the wings for her moment to come. When that moment came, the twenty year truce was ended by Adolf Hitler. That is perhaps the most damning indictment of both Republican mismanagement and world indecision that can be made.