The earth, its relation to the stars and planets, and speculations as to its origin attracted human curiosity long before the birth of the geological sciences. Although such studies fall more properly within the realm of astronomy,’ a brief survey of the earth and its planetary relations will provide the reader with some understanding of Earth’s place in the universe.

THE EARTH IN SPACE

Galaxies, disc-shaped clusters containing millions or billions of stars, are the major constituents of the universe. Astronomers estimate that 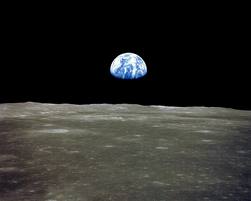 there are large numbers of galaxies in outer space. However, only one, the Milky Way, the galaxy in which Earth is located, will be discussed here. This galaxy, which contains every star that we can see with the naked eye, is lens shaped and contains billions of stars, including the sun.

A great mass of gaseous material like the other stars, our sun has a diameter of about 1,465,000 km and is located about halfway between the center and the edge of the Milky Way. The sun is important to man, for it is the center of the solar system. The solar system is composed of the sun, nine planets (all of which revolve around the sun), thousands of asteroids or planetoids (small planets), comets, and meteors.

The planets, the largest of the solid bodies in the solar system, all move on essentially the same plane around the sun. Nine in number, they are (in order from the sun), Mercury, Venus, Earth, Mars, Jupiter, Saturn, Uranus, Neptune, and Pluto.

Associated with most of the planets are smaller bodies called satellites or moons, which revolve around each planet. The moon, Earth’s satellite, revolves around our planet approximately once every month. Some planets (Mercury, Venus, and Pluto) have no known satellites. However, Jupiter, the largest planet, has fourteen.

Located between the orbits of Mars and Jupiter are thousands of small planet-like bodies called asteroids (or planetoids). They revolve about the sun in much the same manner as the planets. Meteors, rocklike objects traveling through space, become highly heated when they enter the earth’s atmosphere. These so-called “shooting stars” are usually consumed by heat before they reach the earth’s surface. Some, however, strike the earth as meteorites. The solar system also contains large, self luminous, celestial bodies called comets. When comets come near the sun they can be seen from the earth. Unfortunately, because of their eccentric (off-center) orbits, comets are visible only at long intervals.

Shape of the Earth. The earth has the form of an oblate spheroid. That is, it is almost ball shaped, or spherical, except for a slight flattening at the poles. This flattening, and an accompanying bulge at the equator, are produced by the centrifugal force of rotation.

Size of the Earth. Although the earth is of great size, Jupiter, Saturn, Uranus, and Neptune all have greater equatorial diameters. Earth has a polar diameter of about 7900 miles (the equatorial diameter is approximately 27 miles greater because of the bulge described above). The circumference of the earth is about 24,874 miles, and the surface area comprises roughly 197 million square miles, of which only about 51 million square miles (29 percent) are surface lands. The remaining 71 percent of the earth’s surface is covered by water.

Earth Motions. We have already learned that each of the planets revolves around the sun within its own orbit and period of revolution. In addition to its trip around the sun, the earth also rotates.

Rotation of the Earth. The earth turns on its axis (the shortest diameter connecting the poles), and this turning motion is called rotation. The earth rotates from west to east and makes one complete rotation each day. It is this rotating motion that gives us the alternating periods of daylight and darkness which we know as day and night.

Revolution of the Earth. The earth revolves around the sun in a slightly elliptical orbit approximately once every 36514 days. During this time (a solar year), the earth travels at a speed of more than 60,000 miles per hour, and on the average it remains about 93 million miles from the sun. In addition to rotation, revolution, and precession, our entire solar system is heading in the general direction of the star Vega at a speed of about 400 million miles per year.