“There are only two ways to live your life. One is as though nothing is a miracle. The other is as though everything is a miracle.”Albert Einstein Director Agnieszka Holland has produced a thoughtful and thought-provoking film in The Third Miracle. It centers on the complicated character, Father Frank Moore. 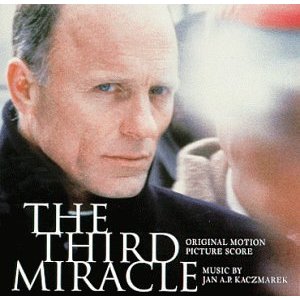 any alleged supernatural activity in the region. He is most known for earlier exposing what many considered a saint, as a sexually tortured man who eventually committed suicide. This incident branded him the “miracle killer”. In the beginning, even he had begun to believe in the intercession of this legendary Fr. Falcone. Discovering the truth left him with a scarred psyche filled with regret from years of shooting holes in people’s beliefs.

While in a crisis of faith he is asked by his prelate to investigate a new case — Helen O’Regan and a miracle at St. Stanislaus parish in a dilapidated urban area. The miracle was a girl named Maria, cured of terminal Lupus after praying for the intercession of the recently deceased O’Regan. Included with the physical healing was a yearly manifestation where a favorite statue of Helen’s would shed tears of blood. The blood matched Helen’s type. Maria went on to become a prostitute and drug addict leading her mother to claim “God wasted a miracle”. Additionally, Helen’s daughter Roxane struggled with the investigation since she had bitterness toward her mother for leaving her at age 16 by moving into the parish rectory. For her religion was “pathetic” and her bitterness prevented her from seeing how God could work miracles through a flawed human being like her mother. The added dimension of a romantic relationship between her and Fr. Malone was unnecessary and incidental to the story, except to show the loneliness and humanity of the postulator. This new endeavor reinvigorates Fr. Frank. He sees it as a possibility to redeem his past, this is manifested in a poignant scene where he cries out, “I want God to show his face again”. He acknowledges his weakness in view of her character by declaring, “Her [Helen’s] heart was full of love. I’m not even a good priest. Make me worthy”

Miracles are an invitation to faith. I think this is an appropriate theme for this movie because the primary miracles associated with Helen become invitations to faith for each of the characters in the movie. For Fr. Frank, they are an invitation to renew and rediscover his own faith, and his priestly vows through his relationship with Roxanne. For Archbishop Werner, who plays the part of the religious yet skeptical devil’s advocate, they also issue an invitation. His biggest problem is the source of the miracle. Sainthood, according to him, should be reserved for the heroic martyr not for an American housewife. Yet ironically, he was one of the few witnesses of Helen’s miracle when she was just a child. As a German soldier passing through her town he witnessed how her intercession appeared to stop bombs midair. So for him it was an invitation to faith in miracles coming from unexpected and even flawed mediums. A later second miracle which saves Maria’s life again – it is an invitation for Maria’s mother and Maria to effect change in their lives and embrace the Christian faith and morality which are connected with the events. These miracles, as invitations to faith, open up the possibility of liberation, healing and transformation for each of the characters, in their own way. We are left to wonder to what degree they each respond to this compelling invitation