What are Plate Tectonics?

The lithosphere is broken into rigid plates that move in relationship to one another on the asthenosphere.

Plate Tectonics:  a theory that describes the formation, movements, and interactions of these plates. 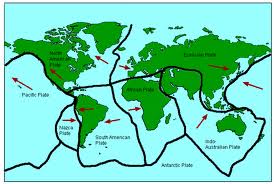 Continental Drift:  an early hypothesis about plate movement that says the continents drifted from one location to another over time.

-Proposed in 1912 by Alfred Wegener

–Based on 4 main pieces of evidence:

1. Shapes of the continents– especially S.America and Africa

2. Fossil evidence– certain fossil remains are only found in parts of S.America and Africa!

–Biggest weakness in Wegener’s hypothesis:  He couldn’t explain HOW the continents moved!

In the 1950’s and 1960’s, scientists made new discoveries that led to the theory of plate tectonics.

1. Locations of volcanoes and earthquakes– They do not occur randomly, but occur mostly in concentrated belts along the plate boundaries!

–Volcanic activity is due to the high heat flow along boundaries, where magma moves up to the Earth’s surface.

–Earthquakes occur when strain builds up and is released in the rocks along these boundaries.

-These magnetic reversals are recorded in bands of rock on either side of a mid-ocean ridge (: a long-chain of volcanic mountains on the ocean floor with a deep central valley)!

–The center of the ridge (where new rock is forming), will always point to the current direction of Earth’s magnetic field.  As this rock cools and solidifies, it is pushed away from the ridge as new crust forms.

-Thus, the rocks at the center of a mid-ocean ridge are the youngest, and they are older as you move away from the ridge.

-And so, a mid-ocean ridge is a plate boundary where 2 lithospheric plates are moving apart!