Reconstructing the Past & Causes of Plate Movement

-Remember that the lithosphere (crust + upper mantle) is solid and is floating on the asthenosphere (melted rock in the mantle below the lithosphere).

1.  Heat from the Earth’s core is transferred throughout the mantle.

2.  Magma that is hotter and less dense rises upward at a mid-ocean ridge. 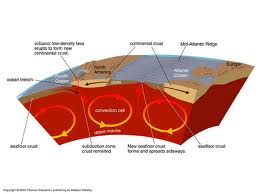 3.  Once the magma reaches the ridge, it cools, and is either pushed up through the rift, or is pushed away from the ridge, dragging the lithosphere with it.

4.  The cooler, denser magma sinks down at a subduction boundary.

5.  Once the magma sinks, it is reheated, and the cycle begins again.

-This process in which heat from the Earth’s core is transferred through the mantle is called mantle convection.

-(Much like what happens to macaroni when you boil it!  It bubbles up in the middle, then is pushed towards the side of the pot, then sinks back down into the water, then repeats!)

Plate movements have caused Earth’s continents to change their positions on the globe over time.

*Based on the evidence of continental drift and plate tectonics from 8.1, we now know that around 250 million yrs. ago, all the continents were welded into one landmass, named Pangaea.

READ:
Our Planet: The Four Spheres

-Over time, Pangaea broke apart into two large landmasses- Laurasia to the north and Gondwana to the south.

-Eventually, these landmasses broke apart into smaller landmasses whose shapes resemble the continents we have today.

-Pangaea is STILL breaking up, and this process in which continents have broken apart and converged has happened many times before!

-N.America and Europe are moving apart at a rate of 2.5 cm/yr.

-Hawaii is moving towards Japan at a rate of 7 cm/yr.

**Even such gradual plate movement will cause substantial change over time!!