Anabolic steroids are  performance enhancing drugs.  They are a synthetic form of the chemical testosterone that is normally found in the body.  By taking anabolic steroids, a person’s testosterone level can be raised up to a hundred times more than the usual amount of 2.5 to 10 mg. Per day.  The increase in testosterone increases anabolic activity, which results in greater muscle bulk.  It also increases protein synthesis and androgenic activity (enhanced secondary sexual characteristics) in males.  The users of steroids want to increase the anabolic effects and reduce the androgenic effects, but  no steroid is known to have just anabolic effects.

Anabolic steroids can be taken in two ways, by injection or they can be taken orally.  Both oral and injected steroids carry benefits and adverse effects.  Orally taken steroids are well absorbed into the stomach and they are excreted fairly rapidly.  The bad side of taking oral steroids is that they are more toxic than injected steroids.  They are highly potent, which makes the risk of overdosing very high.  Steroids that are injected are less toxic to the liver and are less potent than oral steroids on an equal dosage basis.  Injected steroids have a delayed take up, which makes them last longer.  It also allows them to be detected in drug tests for a longer period of time.

How they work in the body

When anabolic steroids are introduced into the body, under certain conditions they increase: protein synthesis, lean body mass, and the nitrogen balance in the body.  A steroid receptor is formed which stimulates the synthesis of enzymes.  With the stimulus of enzymes in the body, protein synthesis is also increased.  One enzyme system that is placed into the body by the receptor is the ribonucleic acid (RNA)-polymerose system.  This system promotes cellular protein metabolism and synthesis which utilizes nitrogen.  By utilizing the nitrogen, the anabolic action is increased, which leads to larger muscle size and strength.  Anabolic steroids also increase nitrogen retention in the body.  They move the nitrogen equilibrium to the positive side.  This allows the body to utilize ingested protein better, but the balance does not last forever.  The body’s homeostatic mechanisms regulate the balance and change it back to normal.  This is one set back to anabolic steroid use.  In order to gain lean body mass a person may have to eat up to 10,000 calories / day and must continue a rigorous weight training program.  If this is not followed, taking the steroids would be worthless.

Despite the increase in muscle size and strength, anabolic steroids carry an even greater risk, the side effects.  The side effects can be 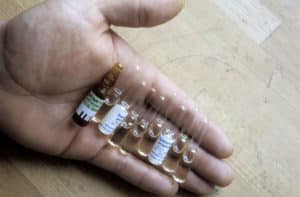 permanent or even deadly.  Serious side effects are seen in the liver, the cardiovascular, central nervous and reproductive/endocrine systems.

One major side effect that can be found in the liver is hepatotoxicity.  This is the poisoning of the liver.  It shuts down the liver’s ability to process blood, which in turn shuts down the whole body.  Prolonged use of anabolic steroids can cause cholestosis and jaundice (yellowish coloring of the eyes, skin and body fluids).  Even though most adverse side effects in the liver are reversible upon discontinuation of steroids, fatalities can occur.  The fatalities occur from hepatic cholestosis, liver tumors or peliosis hepatitis (blood filled cysts that can rupture and cause bleeding and liver failure).

Very noticeable effects occur in the reproductive system.  In males the testicles shrink by about 20%.  They become impotent.  Their sperm count can decrease by 90%.  Also gynecomastia can be seen in males.  Gynecomastia is the enlargement of the breasts.  One adverse effect that can be seen in both males and females using steroids is inappropriate hair growth.  In females, anabolic steroids can cause irregularities in their menstrual cycles.  It causes the female voice to deepen and clitoral hypertrophy.  Clitoral hypertrophy is the enlargement of the clitoris.  Many of these things are irreversible, but some can be changed with the discontinuation of steroid use.

In the cardiovascular system adverse effects can be very deadly.  When taking steroids an increase in LDL (low density lipoprotein) cholesterol and a decrease in HDL (high density lipoprotein) cholesterol occurs in the bloodstream.  This can carry a risk of coronary heart disease and myocardial infarctions.  They can also cause retention of fluids.  High blood pressure can cause an increased risk of congestive heart failure and strokes.

The adverse effects in the musculoskeletal systems are not life threatening, but they are very noticeable.  Younger steroids users can have a  premature closure of the epiphyses (growth plates) in the long bones.  This irreversibly limits the full adult height potential.  With the use of steroids, muscle/tendon strength changes.  The muscles become stronger, but the tendons become stiffer and less able to withstand force.  This causes an increase in muscle strains or ruptures.

The central nervous system is also effected by the use of steroids.  In the person taking steroids, aggressive behavior, self confidence and a sense of well being are seen.  Also manic mood swings can occur.  These mood swings can range from euphoria to sexual arousal to irritability and hostility.  Cognitive impairment can also set in on the user.  Cognitive impairment can involve distractibility, forgetfulness, and confusion.

The use of steroids is nothing new to the world.  Since the time of the Greek Olympics athletes have been using performance enhancing drugs in order to heighten their athletic performance.  In 1886 the 1st person to die due to performance enhancing drugs was a French cyclist.  He took a speed-ball, a mix of cocaine and heroin, which eventually killed him.  Physicians in the 20’s ran tests on athletes by inserting monkey testicles into male athletes to help boost their vitality.  Adolf  Hitler supposedly administered the hormone testosterone to himself and his troops in order to increase aggressiveness.  In 1953 the first anabolic steroid was introduced.  It had five times more strength building effects than natural hormones.  In the 1960’s the IOC (International Olympic Committee) started to ban performance enhancing drugs due to their popular use.  At the 1976 summer games in Montreal, the IOC initiated the first testing for steroids.  Today testing is done routinely on the collegiate and international level.  The USOC (United States Olympic Committee) can suspend an athlete for up to two years if caught using steroids.  Repeat offenders may be suspended from competing on the Olympic level for life.  The NCAA does year round testing regardless if the athlete is in season or not.  Selected teams are notified two days in advance of being tested, and 18 players are tested at that time.  Positive testing results in a one year suspension of the student athlete.

The use of steroids can carry a maximum of 10 years in prison.  Also a fine can be imposed in addition to the jail sentence, or by itself.  The fine can be as high as $250,000.