Acetylsalicylic acid, commonly known as aspirin is one of the most widely used analgesics in the world”. Used by Ancient Greeks and Native 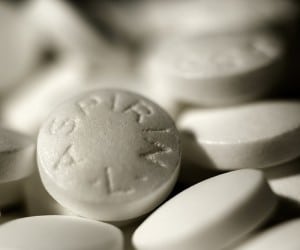 Americans it was used to reduce fever and pain and could also be used as an anti-inflammatory agent. It interferes with tissue contractions of the prostaglandin’s which are chemicals involved in the production of inflammation and pain. It modifies the temperature-regulating portion of the brain, dilating blood vessels in the skin and increases sweating which in turn cools the body reducing fever.

Aspirin also prevents the production of thromboxane which plays a key role in coagulation cascade, which slows blood clotting and is helpful in preventing heart attacks and strokes. It is derived from the bark of the willow tree, and its activity is produced from chemicals called salicylates. Charles Gerhardt a French chemist first synthesized the acetyl derivative from the salicylic acid in 1853 developing the first type of aspirin,” but Felix Hoffman a German chemist was the first to realize its medical value in 1893. Over a long period of constant use aspirin can cause iron deficiency, gastric ulcers, kidney damage and if given to children having chicken pox or influenza could cause the risk of contracting the fatal brain disease known as Reye’s syndrome.

Usage of Aspirin varies. Short term use of about “6-10 days” is recommended without physician supervision but long term use requires periodic evaluations and dosage restrictions.  Side effects also vary with the individual, they could include mild drowsiness, allergic reactions, skin rash, hives, nasal discharge, stomach irritation, heart burn, nausea, vomiting, constipation and in extreme cases erosion of the stomach lining, activation of a peptic ulcer, bone marrow depression, hepatitis, and kidney damage. Overdosing on this drug produces side effects such as stomach distress, nausea, vomiting, ringing in the ears, sweating, stupor, deep and rapid breathing, twitching, and convolutions.   Aspirin was the first non-steroidal anti-inflammatory drug (NASID) but by far not the last. “One and a half million Americans suffer from heart attacks each year and about 200,000 suffer from heart related deaths”. Aspirin helps millions of people each year because it prevents premature blood clotting. No other NSAID can compare with the price or efficacy of aspirin but ibuprofen can come very close. Where aspirin might take up to 12 doses to relieve pain over a long period a strong dosage of ibuprofen could help the patient in one dose.

Even though Ibuprofen works as well as aspirin care must be taken with its usage, although it does not irritate the stomach as much as aspirin it accelerates the damaging of the kidneys. Another problem between aspirin and ibuprofen is price. “A 30 day supply of aspirin could cost $3.95 where a 30 day supply of ibuprofen could cost $22.95”. New studies prove that aspirin also has effect over migraine headaches, cataracts, gallstones, diabetic eye problems, insomnia, weight loss for women, wheat intolerance, leprosy and even hip replacement complications. Aspirin plays an important role in keeping our bodies resistant against various illnesses and helping in times of injury.