Sulfonamides, the chemical name for sulfa drugs were the first chemical compounds to provide safe and effective treatment to most common bacterial infections. Before the use of penicillin after the mid 1940’s, Sulfa drugs played a major role in antibacterial treatment which resulted in a sharp decrease in deaths due to such bacterial infections. In today’s modern medical system sulfa drugs are used to treat patients of 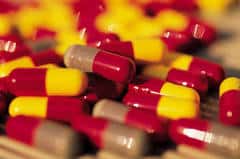 Sulfur in its natural form is a tasteless, odorless, light yellow solid, once forcefully fed to children in the belief that it was good for their health. Sulfur compounds, found in dairy   products and eggs, are an essential dietary ingredient.  Instead of killing bacteria sulfa drugs prevent them from multiplying, making it easier for the body’s natural defenses to overcome and destroy them. Bacteria require certain chemicals known as “para-aminobenzoic acids” to multiply, sulfa drugs resemble the chemical structure of the acids and can be absorbed by the bacteria. The sulfa drugs combine with the outer shells of the bacteria therefore not allowing the real acids to penetrate.

All bacteria are not reactant to sulfonamides and have to be screened by the physician to see if it is necessary to take a more serious action. Sulfa drugs can be taken orally which is most common, or by an injection just beneath the skin. In former medical history they were used to treat pneumonia, dysentery, blood poising, cellulitis, bubonic plague, and conjunctivitis.

been less likely to prescribe them since the late 1940’s. The combination of sulfamethoxazole and trimethoprim has given a new usage for sulfa drugs, now they can be used for such ailments as middle ear infections, shigellosis and recurring urinary tract infections.

READ:
Side Effects of Steroid Abuse

“Paul Gelmo in 1908 discovered the first sulfa drug” accidentally while looking for dies to better color woolen clothing unaware its future lye in the medical profession. In “1953 a German pathologist named Gerhard Domagk” reported that this dye killed streptococcal bacteria in mice leading to the first research in to the bacteria fighting drug.

Major problems included with the first line of the drug sulfanilamide were included in the administration of the drug. It sometimes crystallized in the urine of the patient causing kidney damage. Later development of water soluble sulfa drugs solved the problem of crystallization in the urine and gave the hope of a longer life span to people living in the 1930’s.