Muhammad was born about AD 570 in the city of Mecca, an important trading center in western Arabia. He was a member of the Hashim clan of the powerful Quraysh tribe. Because Muhammad’s father, Abd Allah, died before he was born and his mother, Amina, when he was 6 years old, he was placed in the care of his grandfather and, after 578, of his uncle Abu Talib, who succeeded as head of the Hashim clan. At the age of about 25, Muhammad entered the employ of a rich widow, Khadijah, in her commercial enterprise. They were married soon after. Two sons, both of whom died young, and four daughters were born. One of the daughters, Fatima, acquired special prominence in later Islamic history because of her marriage to Muhammad’s cousin Ali.

About 610, Muhammad, while in a cave on Mount Hira outside Mecca, had a vision in which he was called on to preach the message entrusted to him by God. Further revelations came to him intermittently over the remaining years of his life, and these revelations constitute the text of the Koran.  At first in private and then publicly, Muhammad began to proclaim his message: that there is but one God and that Muhammad is his messenger sent to warn people of the Judgment Day and to remind them of God’s goodness.

The Meccans responded with hostility to Muhammad’s monotheism and iconoclasm. As long as Abu Talib was alive Muhammad was protected by the Hashim, even though that clan was the object of a boycott by other Quraysh after 616. About 619, however, Abu Talib died, and the new clan leader was unwilling to continue the protective arrangement. At about the same time Muhammad lost another staunch supporter, his wife Khadijah. In the face of persecution and curtailed freedom to preach, Muhammad and about 70 followers reached the decision to sever their 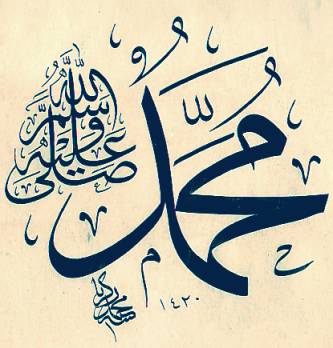 ties of blood kinship in Mecca and to move to Medina, a city about 400 km (250 mi) to the north. This move, called the hegira, or hijra, took place in 622, the first year of the Muslim calendar.

In Medina an organized Muslim community gradually came into existence under Muhammad’s leadership. Attacks on caravans from Mecca led to war with the Meccans. Muhammad’s followers obtained victory at Badr but were defeated at Uhud a year later. In 627, however, they successfully defended Medina against a siege by 10,000 Meccans. Clashes with three Jewish clans in Medina occurred in this same period. One of these clans, the Banu Qurayza, was accused of plotting against Muhammad during the siege of Medina; in retaliation all of the clan’s men were killed and the women and children sold into slavery. Two years later, in the oasis of Khaybar, a different fate befell another Jewish group. After defeat they were allowed to remain there for the price of half their annual harvest of dates.

Since AD 624, the Muslims of Medina had been facing Mecca during worship (earlier, they had apparently turned toward Jerusalem). Mecca was considered of primary importance to the Muslim community because of the presence there of the Kaaba. This sanctuary was then a pagan shrine, but according to the Koran, it had been built by Abraham and his son Ishmael and had therefore to be reintegrated in Muslim society. An attempt to go on pilgrimage to Mecca in 628 was unsuccessful, but at that time an arrangement was made allowing the Muslims to make the pilgrimage the next year, on condition that all parties cease armed hostilities. Incidents in 629 ended the armistice, and in January 630, Muhammad and his men marched on Mecca. The Quraysh offer to surrender was accepted with a promise of general amnesty, and hardly any fighting occurred. Muhammad’s generosity to a city that had forced him out 8 years earlier is often quoted as an example of remarkable magnanimity.

In his final years Muhammad continued his political and military involvements, making arrangements with nomadic tribes ready to accept Islam and sending expeditions against hostile groups. A few months after a farewell pilgrimage to Mecca in March 632 he fell ill. Muhammad died on June 8, 632, in the presence of his favorite wife, Aisha, whose father, Abu Bakr, became the first caliph.

According to Muslim belief, God sent Muhammad as a messenger from among the Arabs, bringing a revelation in “clear Arabic” ; thus, as other peoples had received their messengers, so the Arabs received theirs. As one who had lived “a lifetime” among them before his calling, however, Muhammad was rejected by many because he was simply a man among men and not an angelic being. As Moses had brought the Law and Jesus had received the Gospel, the Prophet Muhammad was the recipient of the Koran. He is “the Seal of the Prophets”, and the Koran is the perfection of all previous revelations.

Thank you very much for the info. Hope we can all follow prophet Muhammad’s way of living.