In a world where plants are at the bottom of the food-chain, some individual plant species have evolved ways to reverse the order we expect to find in nature.  These insectivorous plants, as they are sometimes called, are the predators, rather than the passive prey.  Adoptions such as odiferous lures and trapping mechanisms have made it possible for these photosynthesizers to capture, chemically break-down and digest insect prey (and in some cases even small animals.)   There is no reason to fear them though.  The majority are herbaceous perennials, usually only 4 to 6 inches high, and nothing like the plant in “Little Shop of Horrors”. 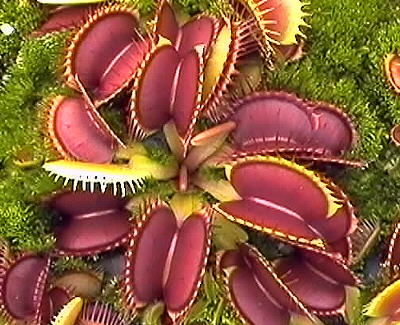 side.  They are most likely to be found in swamps, bogs, damp heaths and muddy or sandy shores.  Drosophyllum lusitanicum from Portugal and Morocco is the one exception; it grows on dry gravelly hills.  Like other green plants, carnivorous plants contain the organic pigment chlorophyll.  This pigment helps to mediate a chemical process called photosynthesis.  This converts light energy into the chemical bond energy of carbohydrate which is utilized as cellular energy, plant growth and development. Water, carbon dioxide, nutrients and minerals are also needed for survival.  In wetlands, where stagnate water contains acidic compounds and chemicals from decaying organic matter many plants have a difficult time obtaining necessary nutrients.   It is in these nutrient poor conditions that some plants evolved different ways of obtaining nutrients.  The ability of carnivorous plants to digest nitrogen -rich animal protein enables these plants to survive in somewhat hostile environments. The evolution of carnivorous plants is speculative due to the paucity of the fossil record. It is believed that plant carnivory may have evolved millions of years ago from plants whose leaves formed depressions that retained rain water.  Small insects would sometimes fall into these water reservoirs and drown, eventually being decomposed by bacteria in the water.  The nutrients from the insects would be absorbed by the leaf.  The deeper the leaf depression the more insects that could be drowned.  This would have created a distinct survival advantage allowing some plants to better compete in nutrient poor soil.  As time passed, these plants would evolve more effective trapping mechanisms.

There are more than 500 known species of carnivorous plant, although some are now extinct.  Classification is done using the standard binomial system and is based primarily on the floral characteristics of the plants, not the trapping mechanisms. They are divided into two groups based on corolla structure; Choripetalae and Sympetalae.  The group of plants categorized as carnivorous belong to seven families, which are recognized by the suffix ‘aceae’, and fifteen genera.  More than half of the species belong to the family Lentibulariacene that is marked by bilaterally symmetrical flowers with fused petals.  The remainder of the species belongs to six families marked by radically symmetrical flowers with separate petals.  Classification is illustrated in the chart below in addition to the geographic range, the number of species, and the type of trapping mechanism.

Active traps are categorized as “steel” or “mousetrap”.  Active steel type traps consists usually of two rectangular lobes that are hinged on one side.  The two lobes move rapidly toward each other to entrap prey when stimulated.  Active mousetraps are suction traps that use egg-shaped leaves or bladders that have an opening with a door on one side.  When trigger hairs on the door are touched the leaf releases pressure and sucks the prey into the trap.  In the aquatic species of the genus Utricularia, this is the most complex and rapidly acting trap; prey is sucked up into the bladders in 1/30 of a second.

There are three types of passive traps; “pitfall traps”, “lobster traps”, and “flypaper traps”.  Not completely passive, Lobster traps employ slow moving tentacles that are powered by cell growth.  These plants lead prey into their trap using these two hairy spiral arms to guide the prey. Many plants capture prey by forming clever containers creatures enter but cannot escape from.  Passive pitfall traps, such as the ones employed by the butterworts (genus Pinguicula) and pitcher plants (Darlingtonia, Sarraceniaceae, & 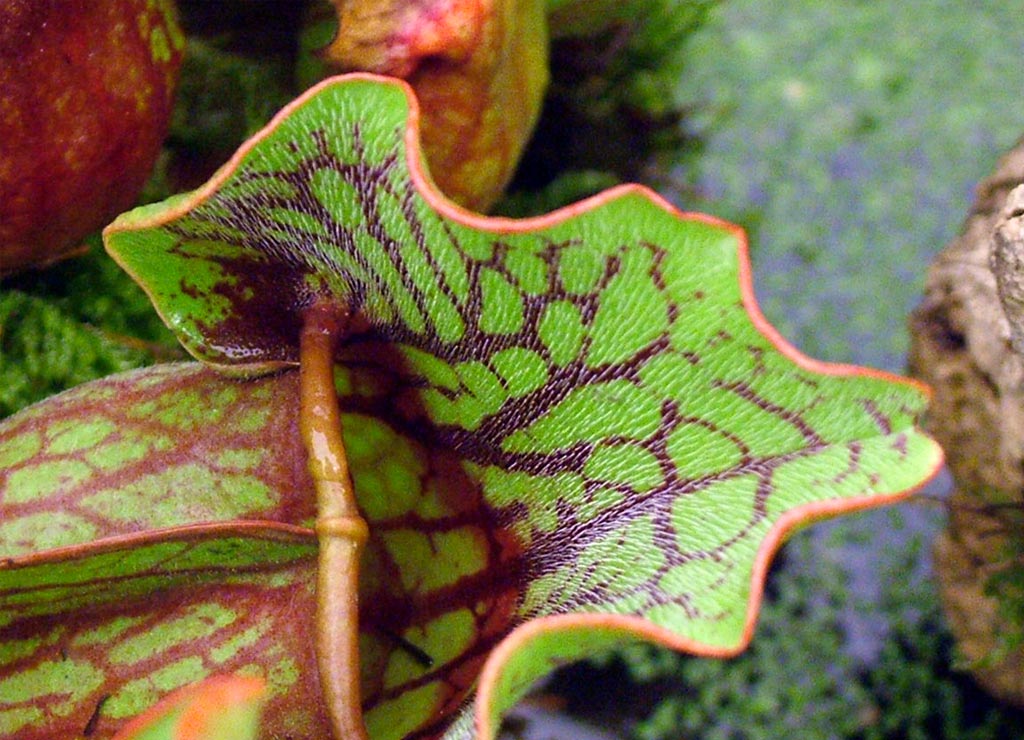 Nepenthes), attempt to lure insects into their cylindrically shaped hollow vessel and into its stomach, which is often referred to as the pitcher.  The insects get stuck in the digestive enzymes of the pitcher and die.   Flypaper traps, such as the sundew (Drosophyllum & Drosera), produce sticky mucilage that covers the upper surface of its leaves.  Insects become mired in this and leaves then bend around or roll up to enclose the prey for digestion.

Within the carnivorous plant world there are some truly amazing plants.  Of all the hundreds of species Dionaea muscipula, the Venus fly trap, is probably the most dramatic.  It is the only species in its genus and there are no other plants quite like it.  It’s hinged leaf lobes are capable of snapping shut on prey in less than a half a second, eventually crushing the insect.  Like many carnivorous plants, the Venus fly trap lures prey in with bate, which in this case is the smell of nectar.  When an insect enters one of the bizarre traps it might bend one of the three stiff trigger hairs in the center of the leaf.  When bent a couple of times in succession these hairs activate the trap.  The plant does not have muscle tissue, the process of closing instead involves electrical signals and changes in water pressure.  The book The Nature of Life briefly describes the process of the Venus fly trap closing once triggered by saying that: trigger cells at the foot of the hair are deformed, as if pried by a lever.  Stimulated by the stress, trigger cells generate an electric signal that flows from cell to cell through the leaf. Specialized motor cells receive the signal, change shape, and cause the trap to close.

About ten days are needed for digestion after which the leaf slowly opens up again revealing only the indigestible chitin remains.  The trap, not the plant itself, turns black and dies when the plant tries to digest fats or eventually after three or four captures.

The largest carnivorous plants belong to the genus Nepenthes.  The vines of these plants are usually tens of meters long.  This genus is also capable of catching some of the largest prey in their pitchers, including creatures as large as frogs and small rodents.  Nepenthes are unique amongst carnivorous plants as the only dioecious genus, which means there are separate male and female plants.  These plants are very endangered and several species or extinct.  Some species of Nepenthes are sold for hundreds of dollars to collectors and are involved in illegal overseas trade.

The growing of carnivorous plants has become very popular in recent years.   Unfortunately the endangered status of many species does not stop collectors from risking high fines and field collecting them. This has had seriously impact on many species, but collectors are not the biggest problem facing carnivorous plants.  In the USA and other developed countries wetlands are considered useless and are being drained and developed on.  At present it is estimated that only 3-5% of carnivorous plant habitat remain in the US.  Another problem is that fires are put out before they spread even though many plants, such as the Venus fly trap, benefit from periodic burns.  Habitat destruction from slash and burn agriculture, however, does not benefit any of the carnivorous plants and is also causing a great deal of the extinctions.