The Nobel Prize is an international award that is given yearly for achievements in physics, chemistry, physiology or medicine, and peace which was set up in 1901 by Alfred Nobel with each prize consisting of a medal, personal diploma and prize amount. The prize in economic sciences was instituted in 1968 by the Sveriges Riskbank (Bank of 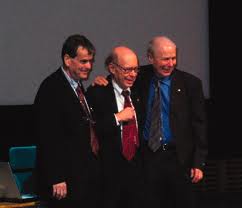 Sweden) in memory of Nobel. In 2004 three scientists, Aaron Ciechanover, Avram Hershko both of the Israel Institute of Technology in Haifa, Israel and Irwin Rose of the University of California in Irvine, California were awarded the Nobel Prize in the field of chemistry for the discovery of ubiquitin-mediated protein degradation. Throughout many generations scientists believed that the degrading of proteins used energy, but these three scientist in the early 1980’s proved the degradation of proteins in cells takes place in a series of step-wise reactions that result in the proteins to be destroyed being labeled with the polypeptide ubiquitin. In the early 80’s these scientists, using biochemistry, developed a theory called the ‘multistep ubiquitin-tagging hypothesis’ based on three newly discovered enzymes labeled E1, E2 and E3. These enzymes activate the ubiquitin molecule whish requires energy in the form of ATP which is eventually attached to the protein target that is to be destroyed. This ubiquitin chain is recognized in the opening of the proteasome. The ubiquitin label is disconnected and the protein is admitted and chopped into small pieces.  Thanks to the work of the three Laureates it is now possible to understand at molecular levels how the cell controls a number of central processes by breaking down certain proteins and not others. Examples of processes governed by ubiquitin-mediated protein degradation are cell division, DNA repair, quality control of newly-produced proteins, and important parts of the immune defense. When the degradation does not work correctly, we fall ill. The discovery of controlled protein degradation explains, at molecular level, the function of a regulation system that is very central for the cell and now can be understood at the molecular level how the cell controls a number of central biochemical processes.