His father, Adolphe Monet, a grocer in Paris, brought the family to Le Havre when Claude was five. Struck by the constantly changing sea and sky on the coast, Claude would go on to put these onto a canvas. Before this however, he started to paint caricatures for locals.

Probably to the disappointment of his parents, Claude decided not to go to l’Eglise de Beaux-Arts in Paris. Instead, he studied art under local artists and developed much promise. One of these was Eugene Louis Boudin, who painted coastal landscapes.

Despite this, he would move to Paris in 1859 to attend l’Academie Suisse, where he met Camille Pissaro. He was sent to Algeria for military service from 1860-62. After his return he enrolled in the studio of Charles Hleyre, where he would meet Pierre Auguste Renoir, Frederic Bazille, and Alfred Sisely. It was at the studio that Claude would participate in a rare practice. 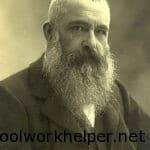 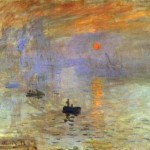 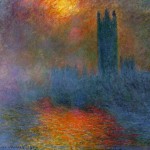 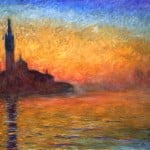 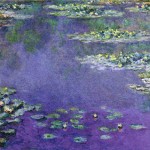 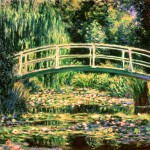 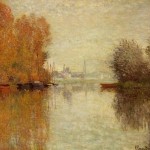 Many European artists of the day painted landscapes, but they were most often painted in the studio, with a basic feeling of what the scene looked like. Monet painted outdoors. By 1865 he was painting marine and forest subjects, townscapes, and figures in landscape settings, all outdoors.

In the summer of 1869, he worked with Renoir to lead the creation of outdoor impressionism. In what is now known as a signature of impressionism, he favored rivers with light dappled water and scenes in which brushstrokes dissolve the forms of objects by breaking brushstrokes and patches of color into their contours.

Then in 1876 he enacted his plan to paint a single object from several viewpoints. He picked as his subject Gare Saint-Lazare, a train station in Paris.

Despite his talent, Monet had to endure extreme poverty. This was like this until the 1880s when Monet’s works began to sell for a higher price. He was then free to paint as he pleased. He once again started doing studies of objects. Some of his subjects included haystacks, poplar trees, the facade of Rouen Cathedral, the Seine at Giverny, and view of the River Thames and the Houses of Parliament. But after 1890 his main subject was the lily pond in his backyard. Monet died December 5, 1926. Behind him he left his works and a new style of art – impressionism.