Cyprus, an island in the Eastern Mediterranean, at the cross-roads of three continents – Europe, Asia and Africa – has one of the

oldest histories of the world, dating back 9000 years. Its strategic position, its wealth in forests and mineral deposits, as well as its skilled craftsmen, made it the prized possession of the powers of the day. Cultural influences came from all directions – all major regional civilizations left their mark on the island, contributing to the development of a very rich and diverse cultural heritage.

The Stone Age The first signs of human life on the island date back to c. 8500 BC during the Palaeolithic period. Evidence of human activity was found in cave dwellings near Liopetri, though it is not known whether they were just hunting parties passing through or permanent settlers. The first undisputed settlements are believed to have been established towards the end of the 8th millennium BC. Vestiges of such early communities are found all over the island, such as at Khirokitia, Kalavasos-Tenta, Apostolos Andreas- Kastros, Phrenaros, Petra tou Limniti.  Neolithic Cypriots built circular houses with small undressed stones for the lower structures and sun-dried mudbricks and clay for the middle and superstructure. The Khirokitia neolithic settlement in Larnaca district stands out as a striking example of prehistoric architecture.

The Neolithic settlement of Khirokitia

The Bronze/ Copper Age Large copper deposits brought fame and wealth to the island and may have even given it its name. It has been documented that during the Bronze Age Cyprus had intense commercial relations with the main commercial and cultural centres of that time. During this period metallurgy and pottery flourished while close relations developed, particularly with Crete, which are also expressed in the Cypro-Minoan script which appeared in Cyprus around 1500 BC. Of special significance for the future of Cyprus was its colonisation around 1200 BC by Mycenaean and Achaean Greeks, a migration process that lasted for more than a century. They brought with them to the island the Hellenic language, culture and religion. Legend has it that the first Hellenes who settled in Cyprus were heroes of the Trojan War. The arrival of the Achaeans greatly influenced town planning, architecture, and pottery. Since then Cyprus has remained predominantly Greek in culture, language and population despite influences resulting from successive occupations. Iron Age More and more people from the Greek world came to live in Cyprus. They built city along the lines of the Greek ones. There were about eleven city kingdoms in all: Kourion, Paphos, Soloi, Marion, Lapithos, Salamis, Kition, Kyrenia, Amathus, and Idalion. Although Cyprus was conquered by other peoples, these city kingdoms mostly ruled themselves, paying taxes to their conquerors. The island was conquered in succession by the Assyrians, the Egyptians and the Persians (800-332 BC).

For more than a century, Cyprus was caught in the middle of the power struggle between Greece and Persia. In the 6th century BC Persia became the dominant power and the kings of Cyprus, while being allowed to retain their autonomy, were obliged to pay tribute to the Persian King and place their military forces at his disposal. Persia’s domination, however, was not maintained easily and there were several attempts tooverthrow the Persian yoke, the most significant being the Ionian revolt and an attempt by King Evagoras I of Salamis to unite all of Cyprus’ city-kingdoms under him. Attempts failed. 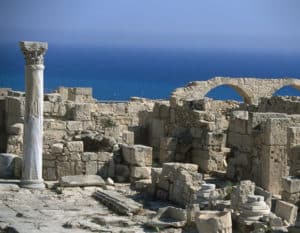 Empire. Upon Alexander’s death Cyprus fell to one of his generals, Ptolemy I, the ruler of Egypt. From then on Cyprus, under the Ptolemies, was an integral part of the Hellenistic World until its integration with the Roman Empire in 30 BC. During this time Cyprus experienced significant cultural activity and close contacts with the city kingdoms of the Hellenic World. Cypriot athletes took part in the Olympic and Panathenian Games and the names of Cypriot sculptors are referred to at Delphi and Lemnos. The worship of Aphrodite was known throughout the region and the Temple of Goddess of Love and Beauty at Palaepaphos gathered pilgrims from all over the ancient world. The city-kingdoms of Salamis, Amathus, Paphos and others which were established at the time of Greek colonization flourished during this period and produced magnificent pieces of architecture and sculpture which survive till our days.

As the Ptolemaic Empire declined, Cyprus came under Roman domination and was a colony in 58 BC. Romans also left their legacy on the island in the form of Roman amphitheatres, public baths, mosaics and other architectural edifices. One of the most significant events during this period was the visit to the island of the Apostles Paul and Barnabas, the latter being considered the founder of the Autocephalous Greek Orthodox Church of Cyprus. The Apostles travelled all across the island to Paphos where they converted the Roman governor to Christianity and so Cyprus became the first country to be ruled by a Christian.

The Christian civilization was consolidated in the island during the Byzantine Period (330-1191 AD) at which time the island was an important spiritual focus. Wonderful churches and magnificent monasteries containing fine wall paintings and mosaics survive to our times and are testimony to the importance of Cyprus in the East Roman Empire.  St Bartholomew, mosaic from the  Kanakaria Church. 6th century AD With the emergence of Islam in the 6th and 7th centuries AD, Cyprus became an object dispute between Christendom and Islam. The Arabs, who with their repeated incursions, spread death and destruction in coastal settlements, were finally pushed away in 965 AD by Emperor Nicephorus Phocas and restored Cyprus as a province of the Byzantine Empire. The western Crusaders influenced a great deal the development of the history of Cyprus. It was Richard the Lionheart, King of England, who during the Third Crusade captured the island defeating its ruler, Isaac Comnenos in 1191. Richard tried to sell Cyprus to the Knights Templars, who nevertheless, were not able to resist the revolt of the people of Cyprus. Thus the island went back to the English King, who sold it again this time to the Frankish King of Jerusalem, Guy de Lusignan.

The rule of the Franks in Cyprus lasted until 1489 and during that time life on the island was organized on the basis of the feudal model of the West, oppression of the indigenous population being its main characteristic. The Lusignan period left numerous monuments on the island – mainly Gothic churches and mountain fortifications. During the 14th century Cyprus is an important point of contact between East and West. Within a network of contradictions, a complex cultural creation took shape both in the letters and in the arts with the pronounced seal of a variety of influences. The end of the Latin period in Cyprus came with the Venetian rule from 1489 to 1571. The Venetians held the island for its strategic position in the area of the Eastern Mediterranean on the way to the vital Silk Route to China. Venice, wished in this way to underline its prominence among the western powers of the time and attempted to keep to road to the East open despite the growing menace of the Ottomans. The Venetians also left their mark on the island’s cultural heritage with their fortifications around Nicosia and Famagusta. These, built with the intention of fending off the Turks, proved inadequate and Cyprus fell to the Turks in 1571, becoming part of the Ottoman Empire.

The Turkish Period Though Cyprus on the whole became less prosperous under Ottoman rule, there were certain immediate benefits. 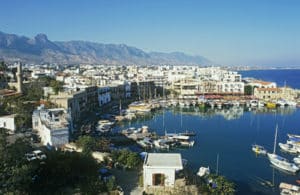 Serfdom was abolished and the rights of the Greek Orthodox Church, which had been suppressed since the Franks, were restored. However, there was very harsh rule and harsh taxation which impoverished the people, and there were continual revolts. In 1821 an attempt by Cypriots to support the Greeks in their revolt against Ottoman rule was brutally crushed, with the Archbishop being publicly hanged and many others, including three bishops, put to death. Cyprus remained under Ottoman rule until 1878 when, with the Treaty of Berlin, the Sultan in his effort to secure British support in his conflict with the Russians leased Cyprus to Great Britain. Then in 1914, following the entry of Turkey in World War I on the side of Germany, the British government annexed Cyprus and turned it into a Crown colony in 1925. In the meantime Turkey surrendered all claim on Cyprus with the Lausanne Treaty it concluded with Greece in 1923. The British Period British rule left its mark on the island’s complex culture with the adoption by the people Cyprus of some of the customs of their colonial masters, the legacy of some British colonial buildings, and, most importantly, the tradition of the British administration especially in the civil service. Cypriots fought alongside the allies against fascism and Nazism during World War II. The British, however, refused to keep their word and offer the island the right of self determination at the end of the war. There followed the Enosis referendum of 1950, when 96% of Greek Cypriots voted for Enosis, Union with Greece. In April 1955 the EOKA Liberation Struggle, against the colonial rulers, resulted in the granting of independence to the island on the basis of the Zurich and London Agreements of February 1959.

The independent Republic of Cyprus came into being in August 1960. Its first President was Archbishop Makarios. Over the first three years of independence relations between the Greek and Turkish Cypriots deteriorated, mainly as a result of flaws in the constitution which gave disproportional rights to the Turkish Cypriot community including the right to block the passing of laws. In 1963 intercommunal violence broke out following which many Turkish Cypriots withdrew to enclaves. Attempts to bring the two sides back together were made through the United Nations who sent a contingent to the island. On 15 July 1974 the Junta ruling Athens at the time organized a coup to overthrow Archbishop Makarios. A week later Turkey invaded the island, claiming this was to restore constitutional order. However, when the rightful government was restored, Turkish troops stayed on, implementing a long-held policy of partitioning the island. They went on to occupy more than a third of Cyprus, forcing 200,000 people to lose their homes and become refugees. The area under Turkish occupation unilaterally declared independence in 1983, an act condemned by the UN and other international organizations. No country in the world other than Turkey has recognized this illegal state. The political issue, despite efforts to solve it, remains virtually frozen since 1974 and the occupation of part of Cyprus by the Turkish army still continues.