Daniel Smith’s, The Great Departure illustrates very well the United State’s evolution from a traditionally isolationist nation to an interventionist nation. WWI literally dragged the U.S. out of its isolationist shell and placed the U.S. at the forefront of international politics. 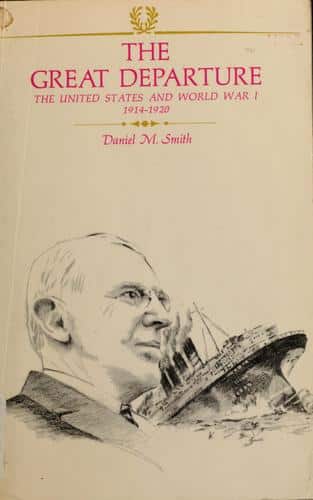 The pressure to join WWI was resisted greatly by the Wilson administration and the country as a whole. Smith does an excellent job at presenting the factors that influenced the U.S. to enter the war and at conveying the mind set of American leaders during this time and the issues they faced pertaining to the war. The author illustrates the factors of interest or the eventual causes involvement in WWI in chapters II, III, IV. He offers good points to the issues and now I would like to discuss some of the issues he has mentioned. Propaganda was a tool used by Germany and the allies to influence the U.S., whether that propaganda was used to keep the U.S. out of the war or to try and draw the U.S. into the war makes no real difference. The extent of propaganda in the U.S. is shown by the Dr. Albert’s briefcase affair and the German execution of Nurse Edith Cavell and other atrocities of war carried out by either side. The author, while recognizing the importance of these propaganda stories and the heterogeneous culture of the U.S., underestimates the actual impact on public sentiment it actually had I feel. The U.S., “the great melting pot” had an enormous immigrant population, to underestimate the effect of propaganda on a population that had close personal ties to their homeland, and their ability to influence the actions of government in a democratic republic is a mistake.

President Wilson was operating under this assumption that the people would influence the government when he neglected to accept any of the Senator Lodge’s changes to the peace treaty. While I agree with Smith that this is not the reason the U.S. joined the allies in WWI, I feel the heterogenous makeup of the U.S. population is possibly the major influence the U.S. had to move away from an isolationist state. Balance of Powers was another great factor that influenced the U.S. in its views of WWI. The U.S. and the world had come to rely on the principle of balance of power to ensure peace, security and trade throughout the world, and it was no doubt that a victory by the Central Powers would catapult Germany to superpower status and upset the balance of power in Europe and thus the rest of the world. The only check on German powers then would be the U.S. This situation is what the U.S. feared. The author offers and example of this sediment from the viewpoint of Robert Lansing; counselor to the State Department (at the time): “Germany the leading representative of a militaristic and statist philosophy, could be said to be a triple threat to the United States: ideologically it menaced democratic institutions and values, militarily it endangered the nation’s security, and it was the most serious rival of the United States for economic and political influence in Latin America.” I agree with Smith that this fear of future aggression on the part of Germany influenced foreign policy greatly. However, the scope of influence in Latin America is exaggerated. Germany did have large amounts of money invested in Latin America at the time but German investments were dwarfed by the investments of Great Britain in Latin America. So the claim of Germany being the most serious rival of the U.S. for economic influence in Latin America is invalid. I am not underestimating the amount of influence Germany had in Latin America, the Zimmermann telegraph clearly illustrates the influence Germany had in the region and this proposal of Germany to Mexico to aid Germany in the event of U.S. involvement in the war and Mexico would receive territory it had lost to the U.S. earlier. I feel that the U.S. and Britain had a much larger scope of influence in Latin America for Germany to bring in Latin American countries to align themselves with the Central Powers. I do agree with Smith that the Zimmerann telegraph did prepare the public for the possibility of the U.S. entering the war. Trade is another important issue that the U.S. faced is its postwar period. The U.S. economy was booming from the war trade. While the U.S. government at first did not actively trade in war materials, many American companies did. The Wilson administration sought to actively protect American companies’ interest.

Trade and the freedom of the seas was a complex issue for the Wilson administration. The submarine warfare of the Germans threatened American shipping and the blacklisting of American companies by the British were complex issues that tested the foreign relations skills of Wilson. The U.S. was looking at both of these problems with views that were outdated. As the old laws of war stated that a neutral nation (the U.S.) could trade with belligerent nations and had the freedom to sail the seas and if so inspected and found to be carrying contraband arrangements for safe passage of those aboard must be provided. The Germans found this to be unacceptable for submarine warfare did not allow for the passage of passengers and it put the submarine at risk when it surfaced to inspect ships. Smith covered the U-boat issue very well I thought. What this issue of trade boiled down to is that the U.S. was furnishing guns, food, clothing and other materials of war to the allies and wanted this right to trade unobstructed. The U.S. was in all actuality doing everything it could to ensure an allied victory without actually fighting a war. Smith illustrates well our economic involvement in the conflict and the ever struggling fight not to get involved in the actual politics of the war. Smith represents the mind set Wilson and his advisors very well. He gave abundance of evidence of Wilson taking the moral high ground on many if not all of the issues that came before him. He seems to indicate that Wilson would not have been as an effective diplomatic leader had he been without the aid of his advisors Colonel House and particularly Robert Lansing. Wilson was an ideologist and these two advisors saw things in more practical terms. An example of this would be Lansing’s prediction that the Bolshevik Revolution would end up being as bloody as the French revolution was; while, Wilson felt the people of Russia were a democratic people and would return to a democracy. The author’s accounts of the happenings leading up to war were thorough and illustrated the pressures that led the U.S. into the war and pushed it into the role of an interventionist very well.

READ:
‘Journey of the Magi’: Analysis and Summary